Rebuilding Iraq, one poem at a time 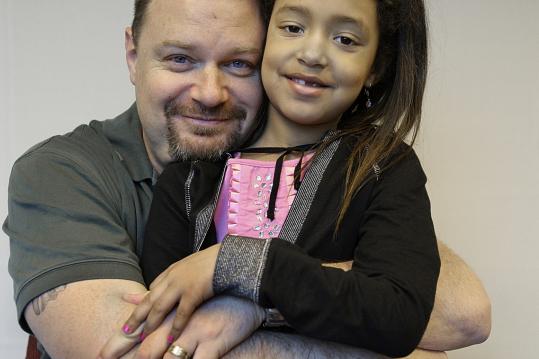 John Dunlop and his 6-year-old daughter, Malaika. Dunlop, a Marblehead native, is home on leave from his deployment in Baghdad with a US Army provincial reconstruction team. (Suzanne Kreiter/ Globe Staff)
By James F. Smith Globe Staff / March 8, 2009

John Dunlop, 6-foot-4 and 240 pounds of muscle, works out of the US Army's Forward Operating Base Falcon in the Rashid District, at the sharp end of Baghdad, but he's not in uniform. His mission is to help Iraq rebuild itself, block by block, and yesterday, as it happened, verse by verse.

Poetry is in the lifeblood of this proudly literate country, and so it was that Dunlop and an Iraqi arts professor convened a poetry competition in war-ravaged Rashid. It was one more way to revive a sense of possibility.

"When you've got local poets who are identified with the community coming forward, it pulls the community around a common identity. It's like everyone's pulling for the same football team," Dunlop said by telephone from Iraq on the eve of the final round of the competition. "It's a sense of normalcy, not war and instability - of cul ture, of things happening, the kinds of spices that make communities worth defending."

If American combat troops are finally able to withdraw from Iraq next year and to leave behind a country that is relatively stable and functional, it'll be thanks in part to Dunlop, a Marblehead native, and people like him.

Dunlop spent most of the past two decades working on child survival and health development in some of the most destitute parts of Africa, including the Central African Republic, southern Sudan, and Rwanda, first for the Peace Corps, then Catholic Relief Services, and now for the US government's Agency for International Development.

Last April, he volunteered to move to Iraq. He is USAID's representative in the Embedded Provincial Reconstruction Team for Rashid District, working with the military to help Iraqis revive their communities and reconstruct their shattered country. The dozen or so teams serving with Army or Marine brigades at front-line bases are a little-known but critical element in the success of the military-civilian "surge" of the last two years.

Dunlop, 43, was on home leave last week to visit his Rwandan-born wife, Angelique, and their two children, Jimmy, 10, and Malaika, 6, who are living in Marblehead while he serves in Iraq.

Dunlop avoids discussing the politics of the war. But his description of his team's work in Baghdad reflects the dramatic overhaul in American strategy, finally integrating military operations with civilian development work in ways that helped arrest a disaster in progress.

"We basically advise the brigade on - we use the term counterinsurgency, but really it's community stabilization: How can we make people feel like this is a normal city, and that it's worth it for Iraqis to invest in peace and business," Dunlop said in an interview in Boston before returning to Baghdad.

One way has been a revival of artistic expression. Three months ago, Dunlop worked with a ceramic arts professor, Saad Shaker, who runs a Baghdad nonprofit group called the Art and Nature Society, to sponsor a successful art exhibition in Rashid where local artists displayed their works.

"When you have art shows going on," Dunlop said, "people have a sense of a community functioning at more than a basic level."

Poetry, too, is part of that. Dunlop said Shaker explained to him the enormous importance of poetry in Iraqi society, not just as an art form, but as a way of communicating in religion, politics, and love, "We started to talk about how we could promote poetry as an art form, and he said, 'How about a poetry contest?' "

So the embedded civil-military development team helped Shaker's group set up the competition, with small prizes of plates or other mementos. Over the past month, four preliminary rounds were held, with more than 100 poets reading their works at each gathering in Rashid neighborhoods, including one drawing 350 people. The final was held yesterday at the Assyrian Hall in Rashid, and more than 200 people turned out for it, Dunlop said.

Dhafer Al Makuter, an Iraqi translator who has worked with Dunlop since last August, said the importance of poetry to Iraqis can't be overstated. "It's like to Americans. Poetry is for when you pray or go to the circus. Everything in Iraq is done with poetry. Today we bought some tractors for Iraqi farmers. A poet was hired to read poetry to the guests at the ceremony for almost an hour. Poetry in Iraq is people's life."

The organizers spread word about the poetry contest via the Rashid radio station. Set up last month, the radio station is another initiative funded and facilitated by Dunlop's team. In this way, the projects reinforce one another in restoring the fabric of the society.

The 10-member embedded reconstruction team is led by a State Department officer and a military officer and includes Dunlop as development specialist. The teams were formed in early 2007 to help address the widely acknowledged early failings of the US occupation.

After the invasion in March 2003, the US-led provisional authority hurriedly rolled out billions in bricks-and-mortar reconstruction projects while the military operated almost in isolation. Neither fared well and the insurgency mushroomed.

While controversy over the surge authorized by President Bush has focused on the additional combat troops, many Iraq analysts now say that other less-noted changes adopted in 2007 by General David H. Petraeus and Ambassador Ryan C. Crocker were equally important.

They aligned the military tactics with the social and economic revival efforts led by the State Department and USAID so they supported each other. One expression of that was new civilian-military teams stationed in forward Army and Marine bases like Falcon, able to interact fluidly with local communities.

That meant working with sheiks and tribal leaders in the communities, improving their basic governance skills as well as encouraging them to challenge the Islamist insurgents. It meant getting to know who mattered, how the bureaucracy worked, and listening to Iraqis explain what they needed most. And it needed development experts like Dunlop as well as good soldiers.

The decline in violence allowed development work to move ahead faster. Dunlop said that when he arrived at the Falcon base last April, "we'd get incoming every day, and sometimes many times every day . . . rockets and mortars." By July, with more Iraqis turning against the insurgency, things calmed down dramatically.

That let Dunlop and his reconstruction team get out and work with community leaders more often and with less concern about security. He has worked on local projects in agriculture, literacy, small-business financing, and building a community service center in Rashid.

His years in Africa taught him a basic lesson about development, he says, which has proved just as relevant in Iraq: "In a heavy conflict situation, you've got to get in there and create stability . . . and then you can rebuild. If things devolve back into instability, that's going to kill your sustainability very quickly."

Army Major Thao Reed, who works with Dunlop in Rashid, said Dunlop "understands how to get things through the bureaucracy and how to get things funded. What John brings to the table is immeasurable . . . The green-suiters are used to doing it one way, worrying about security. He's worried about the long term - he looks five years out."

Reed, who is on her third tour in Iraq, said she has seen USAID's role grow. "They bring expertise, money, capacity, improving governance. But USAID doesn't try to take the credit. We're trying to give legitimacy to the Iraqi government, so that people trust their government."

Al Makuter said he was especially proud of having worked with Dunlop on creating a nine-month literacy project that is teaching 2,000 Iraqis to read and write.

Doug Arbuckle, a USAID colleague who was Dunlop's boss in Dar es Salaam, Tanzania, in 2001, is working with him again in Baghdad. Arbuckle is USAID's executive officer for the Iraq mission, which has 120 expatriate staff such as Dunlop as well as 1,500 contractor employees and 3,700 Iraqi employees.

"John is unafraid. He plows right in and gets the work done. He is a great big guy, and in many of the environments we work in he could be very intimidating, yet he is extremely effective. He establishes rapport very quickly with new people, " Arbuckle said. "And he is the kind of personality who appeals to the military. He's big enough that nobody messes with him."

Dunlop began helping others while in high school, at St. John's Prep in Danvers. Before graduating in 1984, he volunteered at Salem Hospital and got certified as an emergency medical technician, which helped him work his way through San Diego State University.

He joined the Peace Corps in 1991 and worked in small border clinics in the Central African Republic, working on child survival, vaccinations, and antenatal care. He got very sick and lost 70 pounds, returning home a few months early. He then earned a master's degree in public health at Johns Hopkins University in Baltimore.

The Rwandan genocide exploded just as he was graduating, and he moved there for Catholic Relief Services, working on emergency relief and refugee issues. In 1997, CRS sent him to southern Sudan, based in Nairobi.

He joined USAID as a contract staffer a year later - 10 days before the US Embassy was bombed in a deadly terror attack. He made it to the scene from the nearby USAID mission within 15 minutes. He put his EMT experience to use pulling out bodies and looking for survivors, and received a State Department award for heroism.

He stayed in Kenya for three years and in 2001 became one of USAID's roughly 1,000 foreign service officers. He moved to Tanzania for three years, plunging into administering the US initiative on AIDS and malaria. He went back to Rwanda in 2005 for USAID, and stayed until last April, when he moved to Baghdad.

His family is taking advantage of his Baghdad assignment to get accustomed to American life and New England winters. Dunlop is hoping to get another master's degree at the Army War College after his Iraq tour ends in June, to combine his years of conflict mitigation and development work, before heading back abroad to yet another foreign posting.

Update: In May 2009, Dunlop survived a horrific suicide bombing in a market in southern Baghdad that killed three American soldiers and wounded nine others. For his assistance to the victims at the scene, Dunlop received his second State Department award for heroism. He completed his Iraq tour in June 2009 and moved to the Washington headquarters for USAID. Soon after the January earthquake in Haiti, he spent a month in the country coordinating medical supplies for the US relief effort. He is currently serving in the USAID office of military affairs in Washington. - July 15, 2010