A growth market beckons in Calif. 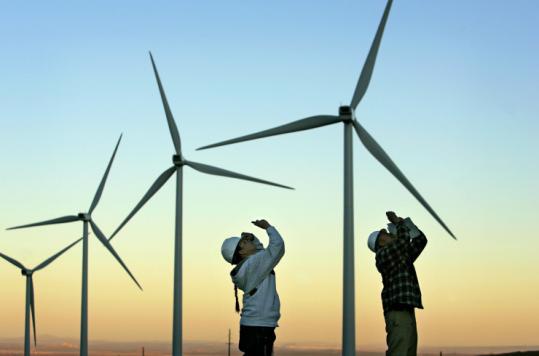 CALIFORNIA CITY, Calif. - One man in the classroom earned more than $100,000 framing tract homes during the building heyday. Another installed pools and piloted a backhoe. Behind him sat a young father who made a good living swinging a hammer in southern Utah.

But that was before construction jobs vanished like a fast-moving dust storm in this blustery high desert. Hard times have brought them to a classroom in Kern County, about 120 miles northeast of Los Angeles, to learn a different trade. Tonight's lesson: how to avoid death and dismemberment.

This is Wind Technology Boot Camp at Cerro Coso Community College, where eight weeks of study and $1,000 in tuition might lead to a job repairing mammoth wind turbines sprouting up across the nation.

The work requires smarts and stamina. It is potentially dangerous. Candidates need good knees, a cool head - and a stomach for heights.

"I've seen guys just freeze halfway up the tower," said instructor Merritt Mays, a baby-faced former Marine, who at 29 already is a grizzled veteran in this young industry.

For those who can hack it, starting pay ranges from $15 to $20 an hour. Crack technicians can make six figures a year. Wind farms are hiring and probably will be for years to come. That's luring hard hats such as 49-year-old Chuck Patterson back to school, despite the inherent risks of working 300 feet in the air.

"This is where the money's going to be," said the contractor from Ridgecrest, southwest of Death Valley National Park, who likes the idea of a steady paycheck after years of construction boom and bust.

As in previous recessions, this economic downturn is boosting enrollment at community colleges and vocational schools. Classrooms are swelling with workers from hard-hit industries looking to change careers.

Educators say the difference this time is the surging interest in so-called green-collar jobs. President Obama wants to create 5 million such jobs over the next decade. What isn't clear is how the nation is going to prepare this workforce.

Technical education for renewable-energy workers is scarce, particularly for the fast-growing wind industry. Only a handful of wind programs operate in community colleges. Cerro Coso filled the 15 slots in its boot camp within hours. The next course is already full.

The United States last year surpassed Germany as the world's number one wind-powered nation, with more than 25,000 megawatts in place. Wind could supply 20 percent of America's electricity needs by 2030, up from less than 1 percent now, according to a recent Energy Department report.

California is the number three wind state, behind Texas and Iowa. A slew of developments are in the pipeline, including in Kern County, where hundreds of turbines already dot the wind-swept ridges of the Tehachapi mountain range.

"This is going to be ground zero for alternative energy" in California, said Jim Fay, vice president of academic affairs at Cerro Coso Community College, which has five campuses in Kern County. "We have to prepare our students."

The economic crisis has dampened growth in the renewable-energy sector. But the US wind industry is clamoring for skilled technicians to maintain the 30,000 wind turbines already in the ground.