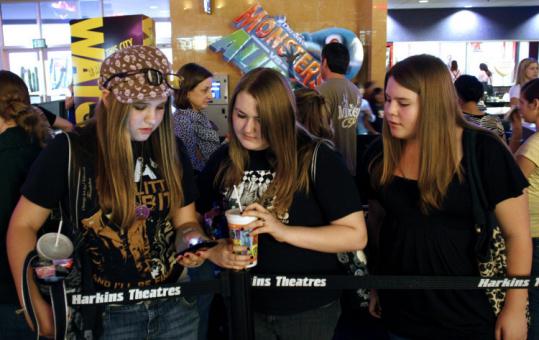 LOS ANGELES - Hollywood could get used to this recession thing.

While much of the economy is teetering between bust and bailout, the movie industry has been startled by a box-office surge that has little precedent in the modern era. Suddenly it seems as if everyone is going to the movies, with ticket sales this year up 17.5 percent, to $1.7 billion, according to Media by Numbers, a box-office tracking company.

And it is not just because ticket prices are higher. Attendance has also jumped, by nearly 16 percent. If that pace continues through the year, it would amount to the biggest box-office surge in at least two decades.

Americans, for the moment, just want to hide in a very dark place, said Martin Kaplan, the director of the Norman Lear Center for the study of entertainment and society at the University of Southern California.

"It's not rocket science," he said. "People want to forget their troubles, and they want to be with other people."

Helping feed the surge is the mix of movies, which have been more audience-friendly in recent months as the studios have tried to adjust after the lackluster sales of more somber and serious films.

As she stood in line at the 18-screen Bridge theater complex here on Thursday to buy weekend tickets for "Jonas Brothers: The 3D Concert Experience," Angel Hernandez was not thinking much about escaping reality. Instead, Hernandez, a Los Angeles parking lot attendant and mother of four young girls, was focused on one very specific reality: her wallet.

Even with the movie carrying a premium price of $15 because of its 3-D effects - children's tickets typically run $9 at the Bridge - Hernandez saw the experience as a bargain.

"Spending hundreds of dollars to take them to Disneyland is ridiculous right now," she said. "For $60 and some candy money I can still be a good mom and give them a little fun."

A lot of parents may have been thinking the same thing Friday, as "Jonas Brothers" sold out more than 800 theaters, according to MovieTickets.com, and was expected to sell $25 million or more in tickets.

Other movies kept up their blistering sales pace, too, including "Tyler Perry's Madea Goes to Jail," about a gun-toting grandma. Even "Taken," a relatively low-cost thriller starring Liam Neeson, is barreling past the $100 million mark this weekend.

Historically speaking, the old saw that movies do well in hard times is not precisely true. The last time Hollywood enjoyed a double-digit jump in attendance was 1989, when the unemployment rate was at a comfortable 5.4 percent and the Gothic tone of that year's big hit, "Batman," seemed mostly the stuff of fantasy. That year, the number of moviegoers shot up 16.4 percent, according to Box Office Mojo, a box office reporting service.

In 1982, theater attendance jumped 10.1 percent to about 1.18 billion (the top seller was ": The Extra-Terrestrial") as unemployment rose sharply past 10 percent. Then admissions fell nearly 12 percent, an unusually sharp drop, in 1985 (the "Back to the Future" year), as the economy picked up - suggesting that theater owners have sometimes found fortunes in times of distress, and distress in good times.

Academic research on the matter is scant. One often-quoted scholarly study by Michelle Pautz, of Elon University, was published by the journal Issues in Political Economy in 2002. Overall, it said, the portion of the American population that attended movies on a weekly basis dropped from around 65 percent in 1930 to about 10 percent in the 1960s, and pretty much stayed there.

The film industry appears to have had a hand in its recent good luck. Over the last year or two, studios have released movies that are less depressing than what came before. After poor results for a spate of serious dramas built around the Middle East ("The Kingdom," "Lions for Lambs," "Rendition"), Hollywood got back to comedies like "Paul Blart: Mall Cop," a review-proof lark about an overstuffed security guard.

"A bunch of movies have come along that don't make you think too much," said Marc Abraham, a producer whose next film is a remake of "The Thing."

Certainly exhibitors are looking for a profit lift in the downturn. A new report from Global Media Intelligence on Friday predicted that the fortunes of movie theater operators like and Cinemark Holdings would be "increasingly favorable against a backdrop of highly negative economic news."

Cinematic quality has little to do with it. The recent crop of Oscar nominees has fared poorly, for the most part, at the box office. Lighter fare has drawn the crowds.

"It would take a very generous person to call these pictures anything other than middle of the road, at best," said Roger Smith, the executive editor of Global Media Intelligence.

"Watchmen," a dark superhero film, opens March 6 and is expected to do megawatt business.

Movie theaters are adding 3 a.m. screenings for "Watchmen" next week, and advance sales by online ticket companies like Fandango and MovieTickets.com have been strong.

"Fandango is experiencing the best first quarter in its history for ticket sales," said Rick Butler, its chief operating officer. "I see no signs of a drop-off."