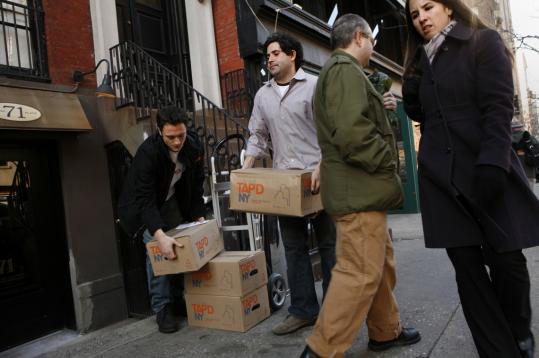 She studied the description: "No glaciers were harmed in making this water." She compared prices: Smartwater cost $1.85. Tap'd NY was 35 cents less.

Szeli and her co-worker went for tap, carrying the bottles to the cash register. "It's cheaper," Szeli said. "Water is all the same anyway. I just prefer to buy my own water in bottles." A few feet away, a scruffy-haired 29-year-old in jeans and a striped shirt delivered a shipment of Tap'd NY out of a rented Scion. Craig Zucker, founder of Tap'd NY, stopped unloading long enough to notice the two customers buying his brand. Zucker smiled.

In the five months since he launched the company, he has proved his hunch: People are willing to pay for New York City tap water, and not just in monthly utility bills.

"It doesn't require energy or pumping," Zucker said, "and it's so pure and clean."

It is, after all, one of the nation's healthiest water supplies - so fresh that in 2007 the Environmental Protection Agency declared it did not need filtration. New York pizza and bagel makers have long credited local water as a special baking ingredient. It goes down soft, without hints of tart-tasting minerals or chlorine as the water of some other public systems have.

The water comes from a system of 19 reservoirs and three lakes in upstate New York - some flowing to the city from as far as 125 miles away. Most of the supply is protected and filtered by the natural processes of upstate ecosystems. It dissolves natural minerals while traveling over land or through the ground.

But how was a New Yorker able to enjoy that fresh taste when out of the house? As Zucker explained, "There aren't necessarily fountains or places to get clean water on every street in New York."

The solution was simple. Especially to a man who has always kept about 20 business ideas in a drawer.

In college, at Miami University in Ohio, Zucker started a discount card company, pitching local businesses to give students bargains. He made revenue from advertisers that paid for space on his discount cards, and from college bookstores that bought the cards and gave them as loyalty gifts to customers.

He sold the business at 22 for what he said was a "great profit," and moved to New York, where he launched a toy and gift wholesaling company, selling 1 million name bracelets.

In 2004, he bought The Hampton's Honey Co., a farm stand brand that he expanded. It was his introduction to the growing local food movement, in which consumers support farmer's markets and neighborhood breweries, keeping money in the state. The honey became a top-selling brand in Whole Foods in the New York region.

One night in 2007, over a restaurant dinner with cold glasses of tap water, Zucker and a friend discussed New York water and why it's so good. He noticed many New York restaurants also had started serving tap water.

Meanwhile, in Berkeley, Calif., a high-end restaurant, Chez Panisse, had banned bottled water, while city governments in Seattle and San Francisco ordered municipal offices to stop buying it. That's when it hit him. "Somebody should be bottling New York water," he said.

Zucker sold his honey company and used the income, along with investments from friends and family, to launch Tap'd NY in October 2008.

To bottle the water, Zucker and his business partner, Jon Flax, 26, who was recruited from Craigslist, pump the water together from a main in a Brooklyn warehouse they rent. Their water bill costs about $2 for every 748 gallons. They fill up a 5,300-gallon leased tanker truck, hiring a driver to transport the water 12 miles across the river to New Jersey to be bottled.

Studies, including one by the Natural Resources Defense Council in San Francisco, have found that most bottled water sold in stores is essentially tap water extracted from aquifers, lakes, and springs.

Like other bottled water companies, Tap'd NY treats its water through a filtration process to cut down on unnatural colors or tastes that chlorine and other substances in pipes may have left behind.

So far, they have sold 50,000 bottles and 75 New York businesses have signed on.