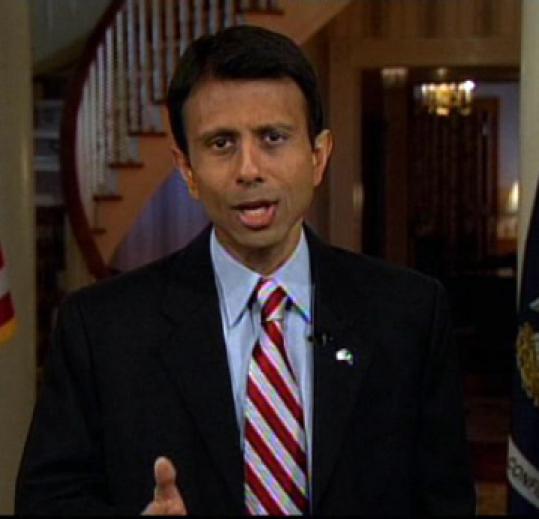 And those were some of the kinder comments from political pundits about Louisiana Governor Bobby Jindal and his response to President Obama's speech to Congress Tuesday night.

Jindal, 37, a Rhodes scholar and son of Indian immigrants, is considered a rising star in Republican ranks and a likely 2012 presidential candidate. GOP leaders, looking for a fresh face for the party's image, tapped Jindal earlier this month for the high-profile task of rebutting Obama's first address to a joint session of Congress.

But in both style and substance, Jindal's speech has drawn flak from Republicans and Democrats alike.

His criticism of government spending for emergency economic relief has been widely panned, especially given his state's receipt of billions in federal assistance after Hurricane Katrina in 2005. And Jindal's voice and earnest, awkward delivery fell flat.

Rush Limbaugh, arguably the nation's most prominent conservative voice, defended Jindal on his radio show yesterday while acknowledging that "stylistically," Obama had outshined Jindal. "The people on our side are making a real mistake if they go after Bobby Jindal," Limbaugh said. "We cannot shun politicians who speak for our beliefs just because we don't like the way he says it."

Republicans had high hopes for Jindal after his appearance Sunday on NBC's "Meet the Press," where he delivered a forceful, concise critique of Obama's $787 billion stimulus plan and explained his decision to reject some of the money allotted for his state.

Jindal was headed to Disney World yesterday with his family for a vacation. But his chief of staff, Timmy Teepell, said his boss had prepared carefully for the speech and that his message was strong. "It's a challenge for anybody to follow Obama. The guy is one of the most gifted speakers of our generation," Teepell said. "Bobby's his own harshest critic. He's always looking for ways to improve."

Biden reiterates speedy dispersal of stimulus funds
WASHINGTON - Vice President Joe Biden said yesterday the Obama administration is determined to speed the $787 billion in stimulus money to Americans clamoring for economic relief, with checks going to states for Medicaid and the next batch of dollars heading to housing.

Meeting with top members of President Obama's Cabinet, Biden said he plans to use "the moral approbation of this office" to make sure the huge fund of stimulus money "gets out the door quickly and wisely."

"As we go along," Biden told the assembled officials, "I'm going to be a bit of a pain in the neck."

Biden said an installment of the stimulus money, $10 billion, was being sent out yesterday through the Department of Housing and Urban Development to help states make homes more energy-efficient and to put money into programs to check for dangerous lead paint in housing.

Also yesterday, the government started sending $15 billion in Medicaid money to the states.

Biden recalled that Obama said in his speech Tuesday night to Congress that no one should "mess with Joe" in his role as overseer of stimulus spending.

But turning to Earl Devaney, the new chairman of the stimulus plan accountability board, Biden said: "This is the guy to don't mess with," patting the former Interior Department inspector general on the back. Devaney disclosed a sex and drugs scandal in the department during the Bush administration.