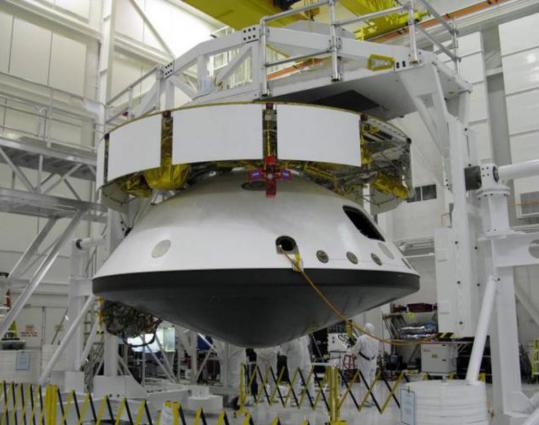 The Mars Science Laboratory is NASA's next big mission to the most Earth-like planet in the solar system. But it's been a magnet for controversy. (NASA Jet Propulsion Laboratory)
By Joel Achenbach Washington Post / February 15, 2009
Text size – +

PASADENA, Calif. - In a "clean room" in Building 150 of NASA's Jet Propulsion Laboratory is something that looks very much like a flying saucer. It's a capsule containing a huge, brawny Mars rover, a Hummer compared with the Mini Coopers that have previously rolled across the Red Planet.

This is the Mars Science Laboratory, the space agency's next big mission to the most Earth-like planet in the solar system. But it's been a magnet for controversy, and a reminder that the robotic exploration of other worlds is never a snap, especially when engineers decide to get ambitious.

The launch has been delayed for two years because of technical glitches. Approved at $1.63 billion, the mission's price tag will be at least $2.2 billion, NASA now estimates. Critics say the cost has really quadrupled since the project was first dreamed up. What no one can doubt is that ambitious missions tend to become costly ones, which jangles the nerves of officials who know how easy it is for a Mars mission to go bust.

Alan Stern, a planetary scientist and former NASA associate administrator for science missions, charged in a New York Times op-ed column last year that the cost overruns of the Mars Science Laboratory are a sign of a "cancer" of spending profligacy that is overtaking the space agency. Stern, now a private consultant, argues that the new rover is too ambitious, with too many new technologies in play, making a cost overrun all but inevitable.

"It's not just that it's a bigger rover. It's also an entirely new kind of landing system. It's also that it's nuclear-powered. It's also that it's carrying multiple instruments far beyond what's ever been done," Stern said in an interview. "We need to go to a strategy where we can access Mars frequently and take advantage of what we've already invented."

NASA officials acknowledge that they are pushing the boundaries of what's possible in Mars exploration. But they say it makes no sense to do the same things over and over again with modest changes.

The new rover, weighing 1,875 pounds, is more than twice as heavy as either Spirit or Opportunity, the remarkably durable rovers that have been sniffing around Mars for the past five years on a mission originally designed to last just 90 days. Those rovers have six instruments each; the new rover has 10, including detectors for organic compounds.

The old rovers could reach out, scratch the Martian surface and try to get a sense of things, but the new rover can retrieve a sample and put it in various analytic chambers. Earlier rovers were solar powered, but this one has a nuclear power source that will allow it to operate day and night.

The new rover is more rugged, capable of navigating much trickier terrain. It can operate at higher latitudes with harsher climates. It has its own meteorology station. It has a color camera that shoots video. It can do almost everything but make espresso.

He acknowledged that the cost overruns will put a crimp in the planetary science budget, which is running at about $1.3 billion a year. The Mars program specifically will feel the effects, and there will have to be cuts or delays in the next rover mission, scheduled for 2016, he said. But he added that the Mars Science Laboratory will be worth it.

Because it's such a large rover, engineers had to invent a new landing technique, called a sky crane. The rover also needed dozens of motors and gearboxes to accomplish the many tasks outlined by scientific investigators. It was the iffy performance of those motors and gearboxes in tests that forced NASA to pull the plug on the mission's scheduled 2009 launch.

Richard Cook, the project manager, said that in calculating the cost and the amount of time necessary for designing the mission, "we didn't extrapolate how much more complex it was" than the Spirit and Opportunity mission.

Mars is strewn with the litter of crashed spaceships. Some probes go there and simply vanish. As Charles Elachi, director of the Jet Propulsion Laboratory, put it, "Mars is very unforgiving."