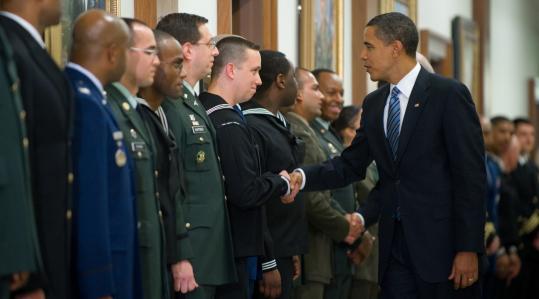 WASHINGTON - President Obama said the fight against terrorism is "uppermost on our minds" as he takes over management of wars in Iraq and Afghanistan, but his first visit to the Pentagon as commander in chief ended yesterday with no decision on his campaign pledge to bring combat forces home from Iraq in 16 months.

Obama did not demand quick action on the Iraq withdrawal he promised, people in the meeting said, and the session seemed designed in part to reassure military leaders and the rank and file that a new commander in chief understands the tolls that two lengthy wars have taken on the military.

"Obviously, our efforts to continue to go after extremist organizations that would do harm to the homeland is uppermost on our minds," Obama said, promising additional civilian resources to help a stretched military.

Obama pledged during his campaign to immediately order the withdrawal of all combat troops from Iraq by May 2010. The new president also has said he would adjust his timeline if it would risk the safety of US troops remaining behind to train Iraqis and fight al Qaeda or if it would cause backsliding in Iraqi stability.

Obama remains committed to closing down the Iraq war, which he has called a mistake, and shifting military and other resources to Afghanistan. At some point soon, he will have to sign off on specific troops movements in both places.

The White House said earlier yesterday that Obama's review of how to wind down the war in Iraq will conclude soon, and Defense Secretary Robert M. Gates and Admiral Michael Mullen, chairman of the Joint Chiefs, said Tuesday that they hope to present Obama with a menu of options quickly.

"This was a conversation at a much higher elevation about global threats the United States faces, about in particular the situations in Iraq and Afghanistan, and the president was, of course, keenly interested in hearing from the chiefs about the health of their forces," Pentagon spokesman Geoff Morrell said. "And each of the chiefs offered him a candid assessment of how they're doing."