All that glitter isn't gold in Vegas

Strip struggles as it focuses on high-rollers 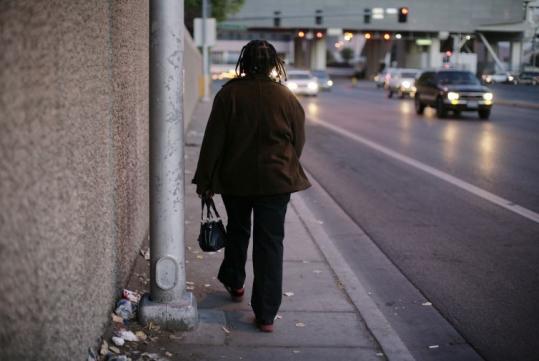 Now observers are wondering whether that was a wise bet.

The recession has hobbled Las Vegas casinos, once lauded as impervious to the national economy's ups and downs. Comparing this past October with the same month the previous year, almost everything has plummeted: the number of visitors, hotel occupancy, the number of conventions.

Gaming revenue on the Strip fell 25.8 percent. And the average daily room rate tumbled 14.3 percent, a huge blow to casino profits. At Encore, the Steve Wynn leviathan that opened this week, rooms are starting at $159. When Wynn Las Vegas debuted in 2005, $250 was a bargain.

"You know, the world has changed and we've changed with it," Tom Breitling, senior vice president of strategy and development, said during a media tour of one of Encore's 2,034 plush suites.

Analysts say Las Vegas Boulevard - now pocked with empty lots and stalled construction projects - should bounce back once the credit crisis wanes and tourists feel confident enough to splurge on vacations. But while previous downturns passed as quickly as a thunderstorm, economists expect this squall to linger through 2009, push Clark County's unemployment rate as high as 10 percent, and wipe out casino projects.

Tourism is Nevada's primary breadwinner, and the Strip, with more than $6.8 billion in gaming revenue last year, is the biggest cash machine of all. How its high-end image plays to tourists during and after the recession will affect the entire state.

"People might want luxury, but are they willing to pay for it?" said Keith Schwer, director of the Center for Business and Economic Research at the University of Nevada, Las Vegas. "We might have missed our brand."

Las Vegas has thrived on showmanship and glitz, but it was purposely affordable. Benny Binion, who launched the World Series of Poker, talked about making "little people feel like big people" to get rich. The creator of Caesars Palace reportedly declined to name it "Caesar's" because he wanted every guest to feel like an emperor.

The idea of Las Vegas as cheap, if somewhat tacky, carried it through other economic slumps, Schwer said.

But Steve Wynn changed things: His Mirage resort and casino, which opened in 1989, introduced high-end boutiques and steakhouses to gambling palaces. Bellagio was even more lavish.

The latest Strip projects - including 76-acre CityCenter, slated to open this year - take their cues from Wynn Las Vegas, a bronze skyscraper with no theme, no sidewalk gimmicks, and no expense spared. The $2.3-billion Encore is similarly palatial: red chandeliers resemble licorice twists, Botero artworks anchor a restaurant, a jewelry store showcases the 231-karat Wynn Diamond, and the centerpiece nightclub is named XS.

Hundreds of people waited outside recently for Encore's opening - many merely to ogle. "I can't afford to stay here. If I had money I would. A lot of money," said Julia Dziegelewski, 62, who was visiting from Palm Bay, Fla., where she said she is struggling to sell her home.

In 2003, one-tenth of Las Vegas visitors made $100,000 a year or more. In 2007, one-quarter did, according to research done for the Las Vegas Convention and Visitors Authority. During the same period, folks making less than $60,000 fell from half of all visitors to 28 percent.

In recent months, tourists and locals have objected in newspapers and online that the Strip caters to the bourgeoisie.

"If casinos want people back, they need to offer value," said one letter to the Las Vegas Review-Journal. "If they balk at the idea of $3 beers, cheaper food, and fewer shakedowns, then perhaps they can try paying their debtors with a mountain of their own folly."

The visitors' authority has tweaked its marketing to woo the cost-conscious. "Vegas Right Now" aims to fill hotels with discounted rooms, show tickets, and spa packages. In the summer, as gas prices neared $4 a gallon, ads proposed that "Crazy Times Call For Crazy Fun."

Recently, tourism officials flew in 120 residents of Cransfills Gap, Texas - population 351 - and filmed them sky-diving, golfing, and patronizing night clubs. The resulting ad blitz intends to paint Vegas as a quick and affordable getaway for Middle America. At the same time, marketers and hoteliers have tried not to dull the Strip's glitterati appeal.

"You don't want to build a brand in today's market based solely on a price that backs you into a corner," said Terry Jicinsky, the senior vice president of marketing at the visitors' authority.