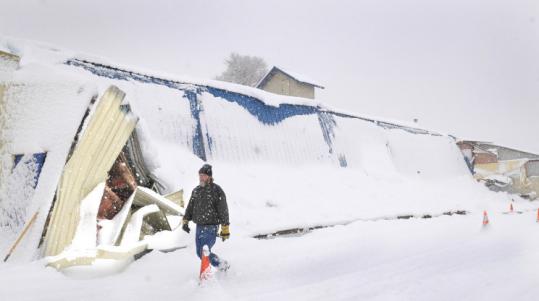 The nearly 60 inches of snow that has fallen in Spokane, Wash., this month has led to several roof collapses. (Christopher Anderson/The Spokesman-Review via associated press)
December 31, 2008
Text size – +

The center of a supermarket roof in north Spokane collapsed Monday evening, prompting the evacuation of that store. A fire official said one minor injury was reported.

Two more collapses were reported yesterday morning, at a church gymnasium and a hardware store. No one was injured. The collapses occurred as Spokane set a monthly record for snowfall, at 59.7 inches, after 8.3 inches was recorded in the 24-hour period ending at 4 p.m. Monday, said National Weather Service meteorologist Ellie Kelch. That's more snow than the area receives in a typical winter.