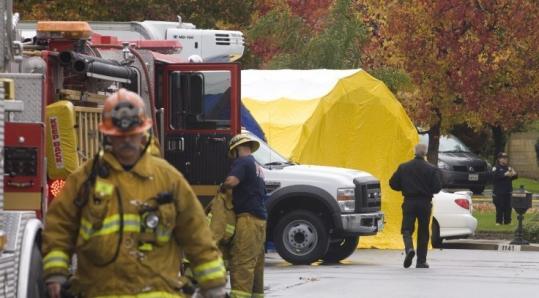 Three people who attended the party in Covina, a city 22 miles east of downtown Los Angeles, remained unaccounted for yesterday as coroner's officials continued to search the wreckage.

Bruce Jeffrey Pardo, 45, who had recently been divorced and is believed to have lost his job, knocked on the front door of a home owned by the parents of his former wife in Covina around 11:30 p.m. Wednesday, said Police Chief Kim Raney.

An 8-year-old girl ran to the door to answer Pardo's knock, police said. He shot her in the face, stepped into the house, and fired indiscriminately with a semiautomatic handgun.

Pardo was carrying a large present that turned out to be a homemade pressurized device to spray a flammable substance. Pardo is thought to have worked in the aerospace industry as an engineer, according to acquaintances.

Partygoers fled the house in panic, running to neighbors' homes and calling police. A teenage girl, according to a neighbor, leaped out of a second-floor window, breaking her ankle.

The 8-year-old girl and a 16-year-old girl who was shot in the back escaped the house and were transported to local hospitals, officials said.

Police Lieutenant Pat Buchanan said that none of the dead had been identified, that the bodies were badly burned.

Pardo's former wife and her parents are among the missing or dead.

Police officials said it is unclear whether the former wife, Sylvia Pardo, was at the party when the attack occurred or whether she was one of the injured.

Partygoers, however, said she was in the house.

About 80 firefighters battled flames that soared 40 to 50 feet high for an hour and a half before extinguishing the fire, according to Captain Mike Brown.

"It was a very dynamic situation," he said.

Shortly before 3:30 a.m., Bruce Pardo's brother summoned Los Angeles police to his Sylmar home, about 25 miles away from the carnage. Officers found Bruce Pardo dead from a single gunshot to the head, police officials said.

By 9 a.m. yesterday, Covina police detectives arrived at the house in Montrose that Pardo owned and lived in, cordoning it off with tape.

"Maybe there's some [sign of] planning, maybe letters or anything that will give us more clues about the state of his mind," said Detective Antonio Zavala.

Bruce Pardo had lived at the home alone, Zavala said. Court records show that his wife divorced him in September.

Neighbors said that until earlier this year, Bruce Pardo lived in the house with his former wife and her three children.

They were often seen walking their dog through the neighborhood.

Bruce Jeffrey Pardo shot a girl in the face at the door, then fired indiscriminately with a semiautomatic handgun.