Chaos in wake of Illinois scandal 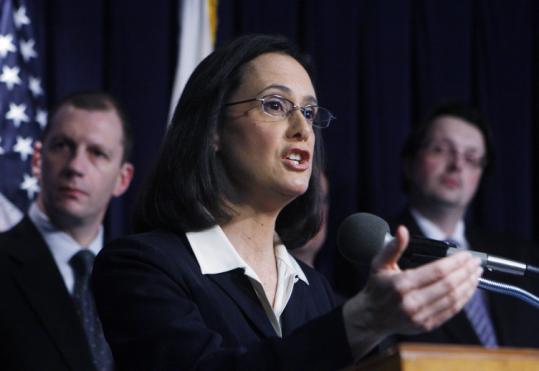 CHICAGO - Illinois plunged deeper into turmoil yesterday over disgraced Governor Rod Blagojevich, as the attorney general asked the state's highest court to strip the governor of his powers, billions of dollars in bills went unpaid, and lawmakers moved closer to impeaching the scandal-plagued politician.

But Blagojevich showed no sign of backing down. He took time to pray with ministers at his home and signed a bill that extends insurance coverage for autistic kids, sending a sign to his critics that he's still in charge.

In the midst of it all, the state headed toward an extraordinary constitutional showdown. Attorney General Lisa Madigan asked the Supreme Court to declare Blagojevich unfit to serve, likening the corruption scandal to a debilitating illness as she ramped up pressure on the governor to resign. The move seeks to hand power over to the lieutenant governor.

It is the first time in Illinois history that such an action was taken. The attorney general is applying a rule that was intended to cover cases in which a governor is incapacitated for health reasons.

The Democrat is "unable to serve as governor due to disability and should not rightfully continue to hold that office," according to the motion. "His ability to provide effective leadership has been eliminated, and the state government is paralyzed."

The attorney general, also a Democrat, asked the court to strip the governor of his duties until possible impeachment proceedings and his criminal case run their course. If he does not step down and is not impeached or convicted, Blagojevich could go to the court and ask to be reinstated.

Illinois has billions of dollars in unpaid bills, including payments to Medicaid patients, hospitals, pharmacies, nursing homes, and schools, and the state has approved $1.4 billion in short-term borrowing to keep cash flowing. But before the borrowing takes effect, Madigan said she has to certify that there is not any legal proceeding threatening the ability of the governor to hold his office.

In light of yesterday's filing by her office, Madigan said she can't sign that.

"We will not be able to move forward on it until we have a different governor," said Daniel Hynes, state comptroller.

The state's inability to pay the bills has "a horrible ripple effect," Hynes said. He said that pharmacies that count on state reimbursements could shut down, and suppliers could stop delivering food to Illinois prisons or letting state troopers buy gasoline. Businesses waiting for the state to pay its bills could lay off workers or simply go bankrupt, Hynes said.

"If our backlog gets worse, people are going to stop providing services," he said.

Blagojevich has rebuffed calls to resign after prosecutors accused him of a litany of corruption allegations, including putting President-elect Barack Obama's Senate seat up for sale, strong-arming the owners of the Chicago Cubs, and threatening to withhold millions of dollars from a children's hospital.

Blagojevich began the day praying with several ministers in his home before heading to his office, telling them he is innocent and will be vindicated "when you hear each chapter completely written," according to one pastor.

The fallout over the scandal resumed yesterday as John Harris, the governor's chief of staff, resigned. He was arrested with his boss on corruption charges. Harris's attorney, Jim Sotos, said his client resigned "because it was the right thing to do."

The taint of the scandal followed Rep. Jesse Jackson Jr. for a third straight day. A report in the Chicago Tribune said businessmen with ties to the governor and the congressman discussed raising $1 million for Blagojevich to get him to appoint Jackson to Obama's seat.

Jackson flatly denied any wrongdoing. "It is unfortunate that every appearance the governor makes and meeting he has taints everyone in attendance," Jackson said.

In Washington, people who have been briefed on the Illinois governor corruption investigation said Rahm Emanuel, Obama's chief of staff, is not a target of the probe.

Emanuel has refused to answer questions about whether he's the "president-elect adviser" referred to in the criminal complaint that accuses Blagojevich of putting Obama's Senate seat up for sale. The complaint does not say that Blagojevich ever spoke to the unidentified Obama adviser about the Senate seat.

Blagojevich faces a growing threat of impeachment when lawmakers gather Monday in Springfield.