Kentucky base braces for soldiers' return

A surge in stress-related illness feared 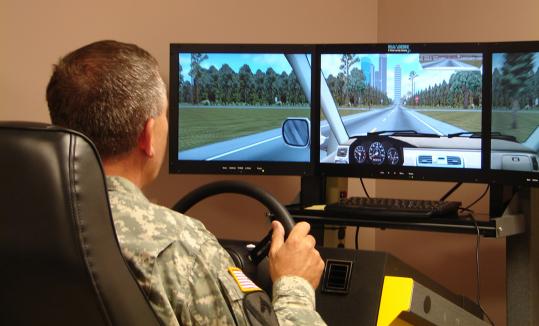 During a tour of Fort Campbell in Kentucky, General Peter Chiarelli, vice chief of staff for the Army, checked out a driving simulator, which is used to test the reaction of soldiers with traumatic brain injuries. (Associated Press Photo / Lolita Baldor)
By Lolita C. Baldor Associated Press / November 30, 2008
Text size – +

FORT CAMPBELL, Ky. - Some 15,000 soldiers are heading home to this sprawling base after spending more than a year at war in Iraq and Afghanistan, and military health officials are bracing for a surge in brain injuries and psychological problems among those troops.

Facing prospects that one in five of the 101st Airborne Division soldiers will suffer from stress-related disorders, the base has nearly doubled its psychological health staff. Army leaders are hoping to use the base's experiences to assess the long-term impact of repeated deployments.

The three 101st Airborne combat brigades, which have begun arriving home, have gone through at least three tours in Iraq. The 3d Brigade also served seven months in Afghanistan, early in the war. Next spring, the 4th Brigade will return from a 15-month tour in Afghanistan. So far, roughly 10,000 soldiers have come back; the remainder are expected by the end of January.

Army leaders say they will closely watch Fort Campbell to determine the proper medical staffing levels needed to aid soldiers who have endured repeated rotations in the two war zones.

"I don't know what to expect. I don't think anybody knows," said General Peter Chiarelli, vice chief of staff of the Army, as he flew back to Washington from a recent tour of the base's medical facilities. "That's why I want to see numbers from the 101st's third deployment."

What happens with the 101st Airborne, he said, will let the Army help other bases ready for similar homecomings in the next year or two, when multiple brigades from the 4th Infantry Division and the 1st Cavalry Division return.

Noting that some soldiers in the 101st Airborne units have been to war four or five times, Chiarelli said he is most worried the military will not be able to find enough healthcare providers to deal effectively with the troops needing assistance.

Many of the military bases are near small or remote communities that do not have access to the number of health professionals who might be needed as a great many soldiers return home.

More than 63,600 active duty Army soldiers have done three or more tours in Iraq or Afghanistan. That is a nearly 12 percent of the total number of soldiers who have deployed at least once. Roughly four in 10 soldiers who have gone to war have served more than one deployment - and that number is growing.

One solution under discussion is the formation of mobile medical and psychological teams that can go to Army bases when they are expecting a surge in activity from returning units.

At Fort Campbell, the director of health services, Colonel Richard Thomas, has roughly doubled his authorized staff of psychologists and behavioral specialists to 55 and is trying to hire a few more.

"I think we have enough staff to meet the demands of the soldiers here, but I could use more, and I'll hire more if I can," said Thomas. "I'll hire them until they tell me to stop."

He said he expects the increased staffing levels to last at least through next year.

For the first time, Thomas said, every soldier returning home will have an individual meeting with a behavioral health specialist and then go through a second such session 90 days to 120 days later.

The second one is generally the time when indications of stress surface, after the initial euphoria of the homecoming wears off and sleeplessness, nightmares, and other symptoms show up.

"We're seeing a lot of soldiers with stress related issues," he said. "They're not bipolar or schizophrenic. But they're deploying three and four times and the stress is tremendous. They're having relationship issues, financial issues, marital problems - all stress related."

According to Dr. Bret Logan, deputy commander for managed care at the base, extended war zone stints that have lasted as long as 38 months over the course of the wars in Afghanistan and Iraq have taken a severe toll.