Palin in spotlight at GOP conclave 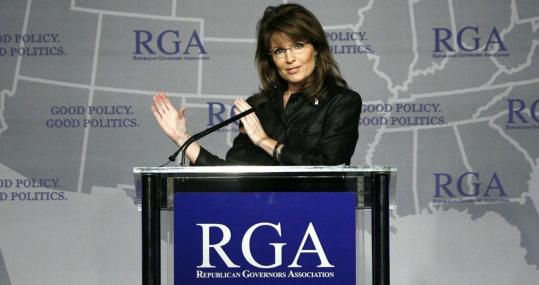 MIAMI - With Governor Sarah Palin of Alaska in their midst, the nation's leading Republican governors used their annual conference to unleash some of their most furious criticism yet about the failed campaign she waged alongside presidential nominee John McCain.

"The main economic argument McCain made during this campaign was earmarks," Governor Bobby Jindal of Louisiana told the Republican Governors Association. "We've got real ideas. We can't just be the party of 'no,' " he continued in a later interview.

Tim Pawlenty, the governor of Minnesota passed over when McCain selected Palin as his running mate, compared the candidate's campaign style unfavorably to President Reagan's. "People mostly want to follow positive leaders; they don't want to follow cranks," he said.

Palin's colleagues rarely mentioned her by name, as the defeated vice presidential nominee swept through the conference, making a triumphal jaunt richer in nostalgia for her brief campaign than in prescriptions for a Republican rebound.

"We are the minority party, but let us resolve not to become the negative party," Palin said yesterday, facing a bank of cameras far larger than is usually present at such an event, which drew 16 of the nation's 22 Republican governors. "Losing an election doesn't have to mean losing our way."

Palin's presence overshadowed the three-day conclave of elected executives that traditionally serves as a celebration of state-level policy successes, a partywide strategy session, and an audition for national candidates. It was at such a meeting in early 2008 that the Alaska governor first received McCain's attention, but her colleagues this week appeared at times miffed that even from under the wreckage, Palin's luster remained visible.

"We've all come to the realization after Election Day that not all is well within the family of the Republican party," said Governor Jon Huntsman Jr. of Utah, referring to a Chinese aphorism from the Han Dynasty that he quoted in Mandarin. "Everyone wants to talk about personalities . . . But for us it's: Where are the ideas? Then the personalities and the names are going to come from those ideas over the next couple of years."

Even as Palin remained the center of attention, a number of Republicans looked back on her ticket's campaign with disdain. President Bush's name received applause when Palin first invoked it; McCain's did not. Pollster Frank Luntz, leading a panel discussion, mocked McCain for not knowing how to use a BlackBerry and for failing to connect with audiences. "Stevie Wonder reads a TelePrompTer better than John McCain," Luntz said.

The highest praise heard for the man Republicans nominated as their standard-bearer in September may have been that he served as "an excellent example on election night of being generous in defeat," as Jindal put it.

There was little consensus, however, on what instruction Republicans could find in those losses - at both the presidential and congressional levels - to guide them in the years ahead. Some said the party had failed to honor its conservative principles of governance, and some suggested McCain had lurched too far right to connect with political moderates.

Others said that due to Bush's unpopularity, 2008 was unlikely to be a good year for the party under any circumstances.

"It means introspection," Governor Mark Sanford of South Carolina said of the deliberations. "What do we stand for?"

At a session titled "Looking Towards the Future: The GOP in Transition," Palin's introspective instinct turned less to the party's destiny than her recent past.

"I had a baby, I did some traveling, I very briefly expanded my wardrobe, I made a few speeches, I met a few VIPs, including those who really impact society, like Tina Fey," Palin joked at the outset of her speech.

The heart of Palin's remarks was a roll call of supporters galvanized by her candidacy - all, notably, were those inspired by her personal qualities. She saluted "prayer warriors," "blue-star moms," "all the young girls," "these everyday hardworking Americans," and "all the families with special-needs children who were the stars of the show at our rallies."

"I'll tell you, I came close to crying a few times because they just touched my heart," Palin said.

Palin visited Miami amid her most aggressive media push since she joined McCain's ticket. She appeared on two CNN shows on Wednesday.

She participated in a news conference here yesterday - which she never did while running for the vice presidency - but took only four questions before leaving the stage, while a dozen male governors in dark suits quietly stood around her.

"Anybody here that's talking about the 2012 elections has got to get their eye on the ball," said Governor Haley Barbour of Mississippi, a former chairman of the Republican National Committee, emphasizing that the 36 gubernatorial races taking place in 2010 should be the party's priority. "The next two years are the only things that matter."

Some of the harshest critics of McCain's campaign were Pawlenty and Jindal, young governors who had been considered as potential running mates and could end up as future rivals to Palin, should she seek the Republican presidential nomination.

" 'Drill, baby, drill' by itself is not an energy policy," Pawlenty said, invoking a favorite Palin catchphrase. The party's inability to communicate environmental concerns contributed to its losses among young and politically moderate voters, he said.

When members of a panel including Whitman and Pawlenty were asked to vouch for Palin's credentials as a potential president, none was eager to so.

None rushed to place the blame on her for McCain's failures, either.

"A lot of this is like postmodern art," Pawlenty said. "A lot of people can look at the painting and see different things."