Auditors can be easy on defense contractors 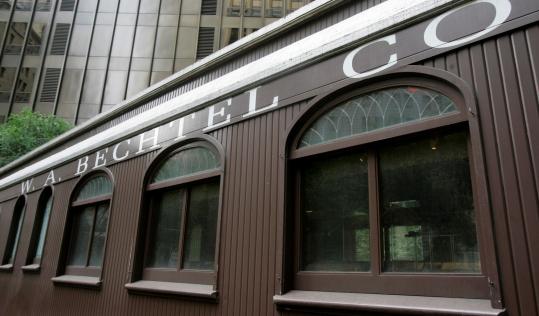 A Bechtel Co. sign appears on an old streetcar in San Francisco. Critics say the company has not opened all its books for review. (Jeff Chiu/ Associated Press)
By Richard Lardner Associated Press / November 10, 2008
Text size – +

WASHINGTON - Instead of seeing red, Pentagon audit managers saw business as usual after being told that a major military contractor failed to open all its books for review.

At a meeting of Defense Contract Audit Agency staff in California last May, auditor Acacia Rodriguez used a 24-page PowerPoint briefing to describe how she and her co-workers struggled with the Bechtel Group's "chronic failure" to provide the financial records required to prove tax dollars were being spent properly.

"Mtn View, we have a problem!" said one of Rodriguez's briefing charts, a shorthand reference to the audit agency's branch office in Mountain View, outside San Francisco.

If her bosses were upset over the contractor's foot-dragging, they didn't show it, according to an auditor who attended the meeting, which included Christopher Andrezze, director of the agency's Western region.

Five days later, the agency issued a report rating Bechtel's internal accounting procedures as "adequate," a passing grade that meant defense auditors could ease up on the company. The report made no mention of the records delays.

DCAA is the first line of defense for the public in policing billions of dollars in defense contracts awarded by the government's top-spending department. In theory, the audit agency has extensive powers, including withholding payments and issuing subpoenas, to force contractors to provide the necessary information.

The reality is quite different.

The Bechtel episode illustrates how tolerant the agency can be when defense contractors slow the government's access to paper records and databases. There is no way to know how often DCAA withholds payments because it does not keep track. And it has not used its subpoena power in 20 years.

"We have been basically on the trust system for years," said the auditor who attended the May meeting. "It did not work on Wall Street and it is not working for federal contracts," said the two-decade veteran of the agency who spoke on condition of anonymity because DCAA employees are not allowed to publicly discuss their work.

Negotiation, not confrontation, is the usual method for prying hard-to-get data loose from companies that make weapons or support troops in Iraq and Afghanistan. But the numbers show that approach is too cozy when the need for tough oversight is greater than ever.

In 2007 alone, DCAA performed nearly 34,000 audits covering $391 billion in contractor costs. Of that total, auditors challenged $4.6 billion, or 1.2 percent, as lacking necessary documentation. The question is, how much more could they have caught?

"I start salivating thinking about how much money is involved and the savings that are potentially there," Senator Claire McCaskill, Democrat of Missouri, said at a congressional hearing in September.

Compared with other federal oversight organizations, such as the Government Accountability Office, DCAA's return on investment is weak. For every dollar GAO spends, it saves taxpayers $94. At DCAA, the ratio is $5 saved for every one spent.

DCAA officials declined to be interviewed for this story. In an e-mailed response to questions, Pentagon spokesman Darryn James said contractor delays and refusals to provide records are not extensive problems.

He acknowledged there are times when contractors have to be reminded to provide information. Records disputes are handled at the lowest possible level by the nearly 3,500 defense auditors in the United States and overseas, James said.

Officials at the agency's headquarters at Fort Belvoir, Va., have had to step in just four times since 2003, he said. All four disagreements were settled without going to court.

"It should be considered a success that DCAA has been able to get the information it needs without having to resort to subpoena authority," James said.

James described the Bechtel situation as an unusual case that was resolved after the agency and the company worked out a way to answer auditor requests for records more promptly.

Bechtel spokesman Francis Canavan said the San Francisco company has a "long record" of working with DCAA. He said there have been occasional delays in locating older records. "We're not aware of any findings that these delays adversely impacted the audits," Canavan said.