Wish lists piling up for Obama 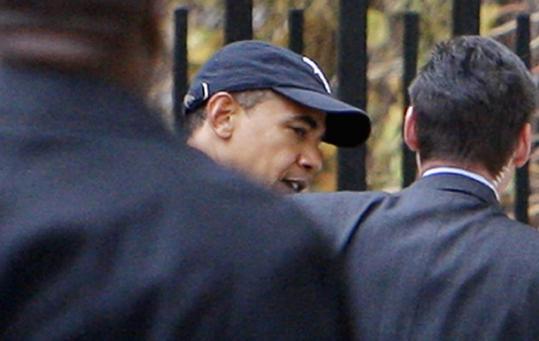 Barack Obama, the president-elect, arrived to work out at a gym yesterday in Chicago. It is unclear how much of an obligation Obama feels to the politicians around the country who supported him during the campaign, especially early on. (Charles Dharapak/ Associated Press)
By Scott Helman Globe Staff / November 9, 2008
Text size – +

Labor unions want President-elect Barack Obama to move quickly on universal healthcare and to make it easier for workers to organize. Latino advocacy groups want immigration reform. Even the National Trust for Historic Preservation is urging Obama to seek full federal funding "to protect our heritage."

Interest groups are furiously drawing up wish lists for the incoming Obama administration, many of them hoping to cash in on the investments they made - in volunteers, political support, and campaign contributions - in Obama's commanding win.

But given the nature of Obama's victory, which was propelled more by a grass-roots army of millions than by traditional Democratic constituencies, is the president-elect really indebted to anybody?

Some analysts and Washington veterans say no.

"He owes nothing to anyone except the people who elected him," said Democratic strategist Steve McMahon.

Norman J. Ornstein, a scholar at the conservative American En terprise Institute, said that the unprecedented ground organization and campaign infrastructure that Obama built left him less reliant on groups such as labor unions to get voters mobilized and to the polls. As a result, he said, Obama is less obligated to them now.

"He doesn't have the traditional strings attached," Ornstein said. "For labor, it's not like they can come to him and say, 'You would not be president were it not for us.' "

The same is true, Ornstein said, for campaign contributors. In the past, he said, trial lawyers - as a group a reliable supporter of Democratic candidates - could go to a presidential nominee and make certain demands. But he said they can't do that to Obama because his own e-mail list of small donors has proven it can raise far more.

"The implicit threat of financial blackmail - it's just not worth very much," Ornstein said.

Not that various interest groups won't be pushing Obama to act on their respective causes.

The webpage of MoveOn.org, the antiwar group that was one of Obama's earliest and most active backers, said it all after Tuesday's election: "Together we did it!" the group said, claiming to have channeled 933,808 volunteers and $888,572 to Obama's campaign.

Translation: We helped you win, and now we want to see you pursue a liberal agenda in the White House. For the membership of MoveOn.org, that begins with bringing a swift end to the war in Iraq.

Change to Win, a coalition of some of the country's biggest labor unions, launched an unusual post-election TV ad that at once congratulates Obama on his victory and subtly reminds him of the group's eagerness to see a progressive agenda advanced.

"President-elect Obama, you're ready to lead, and we're ready to help," the ad says. "Let's finally bring the change we need to Washington."

Anna Burger, secretary-treasurer of Service Employees International Union - a member of Change to Win that says it played a critical role in Obama's election - defined that change principally as universal healthcare, middle-class tax cuts, and the passage of the Employee Free Choice Act, a controversial measure that would remove employers' rights to demand a secret ballot when workers vote on whether to join a union.

"It's not that he owes anything to any constituency," she said. "I think he has inspired people to come together and have an agenda that actually works for all of us, and so that's who is watching."

But Obama will also be pushed by more moderate elements in the Democratic party and by Wall Street and big business, whose executives and other workers also helped fund his campaign.

For instance, a big fight is already brewing over the union voting measure, which Obama voted for in the Senate and expressed support for on the campaign trail. The House passed the legislation in March 2007, but it has stalled in the Senate.

US Chamber of Commerce president Thomas Donohue, asked by reporters Thursday how damaging the proposal would be for business, said, "Do you have about a half-hour for that?" He went on to say there was not a very rational argument for Obama to push the measure at a time when the first priority should be preserving and generating American jobs.

One reason Obama will take office with fewer entanglements is that he rejected campaign contributions from political action committees and federal lobbyists, which companies, unions, and other interests have used to pile up political IOUs.

"I was convinced that if we came together the way we're coming together tonight, our voices are more powerful than the most entrenched lobbyists in Washington, the most vicious political attacks, the status quo that wants to keep things just the way they are," Obama told supporters in Springfield, Mo. shortly before the election. "You are stronger than what's going on in Washington right now."

He was right, said John W. Dean, who was White House counsel for President Nixon, and said interest groups will have only a nominal say in what Obama does. "He's in that unique situation," Dean said. "He can really set his own agenda and not have it set by others."

Beyond interest groups, one thing that's unclear is how much of an obligation Obama feels to the politicians around the country who stood with him during the campaign, particularly those who bucked the party establishment and the Clinton machine to endorse him early. That group includes Virginia Governor Tim Kaine, Senator Claire McCaskill of Missouri, Governor Janet Napolitano of Arizona, and Governor Kathleen Sebelius of Kansas.

Whenever Obama campaigned in Missouri and Virginia, he made a point of expressing gratitude to McCaskill and Kaine for backing him early on, and some Washington observers believe they could be rewarded with posts in the administration. The names of Napolitano and Sebelius are on some appointment lists in Democratic circles, Napolitano for attorney general, and Sebelius for health and human services secretary.

Though Obama does not have many debts to interest groups, analysts say, he does among his grass-roots supporters, especially because he set such high expectations with his calls for sweeping changes in domestic policy, foreign affairs, and the political climate not just in Washington but nationwide.

McMahon said that he believes voters will grant Obama "enormous latitude to implement his changes in a matter and at a time that works."

"People are realistic about the challenges," McMahon said. "He's a change agent, not a miracle worker, and I think people understand that."

In his first press conference as president-elect, Obama on Friday continued to tamp down expectations for his early days in the Oval Office, departing from prepared remarks to warn about the gravity of the economic crisis.