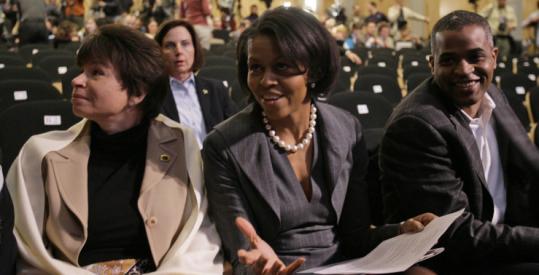 CHICAGO - At a tense point in Barack Obama's campaign, his closest friends got together and decided that, whatever it took, they would make him laugh.

It was May 2008, and Obama was trying to stave off a comeback by Senator Hillary Rodham Clinton. Chatting privately with the candidate before a late-night stop in Indiana, Marty Nesbitt, Valerie Jarrett, and Dr. Eric Whitaker started riffing about how draining the campaign had been. They began laughing and couldn't stop - until strategist David Axelrod walked up with a set of distressing poll numbers.

"We were telling stories and teasing him and trying to lighten the mood," Jarrett recalled. "Then Axelrod came in and threw cold water on it. It was like, man, all that hard work!"

In the Democratic Party, "FOB" used to mean "Friend of Bill," as in Clinton. With Obama's victory on Tuesday, "FOB" is the acronym for the close-knit corps of Chicago neighbors, graduate school classmates, pickup basketball teammates, and family friends of the incoming president.

A few "Friends of Barack" are likely to follow him to the White House, Jarrett being the most likely candidate. Others expect to stay close to Obama through the personal and business ties that have evolved over decades.

The Obama inner circle is a high-achieving group of professionals clustered around Chicago. They vacation with the president-elect's family, play Scrabble with Obama and his wife, Michelle, and stay in touch by e-mail and at dinner parties when time permits.

Some played advisory roles in the campaign, sitting with the candidate at the front of his plane and serving as sounding boards and confidants. Nesbitt is one of Obama's intimates, referred to by a mutual friend as "FOB No. 1."

A resident of the same Hyde Park neighborhood, Nesbitt founded an off-airport parking operation called The Parking Spot and is chairman of the Chicago Housing Authority. As with many of Obama's closest friends, he met the president-elect through Michelle's side of the family. In high school, Nesbitt was recruited by Princeton - where Michelle's brother Craig Robinson was a standout basketball player. Nesbitt wound up going to college elsewhere, but the two became close. When Barack and Michelle began dating, Nesbitt met the new boyfriend, and a friendship evolved.

"There are so many connections between the two of us it's kind of hard to pinpoint how we actually got to know each other," Nesbitt said.

Whitaker, a physician and executive at University of Chicago Medical Center, is part of the group of friends who play pickup basketball with Obama. He was on the court Tuesday for a friendly game before the polls closed.

Jarrett is a friend and top adviser. In her day job, she is chief executive officer of the Habitat Co., a residential property manager. Friends said they would not be surprised to see her accompany Obama to Washington.

"I don't know what Valerie intends to do, but she is probably the Obamas' most-trusted confidante, and she has been instrumental to Barack's success in the campaign," said Alan King, a lawyer and another longtime friend of Obama. "I would expect that a President Obama would want to continue to rely on her friendship and advice."