Maintains she was attacked; suit threatened 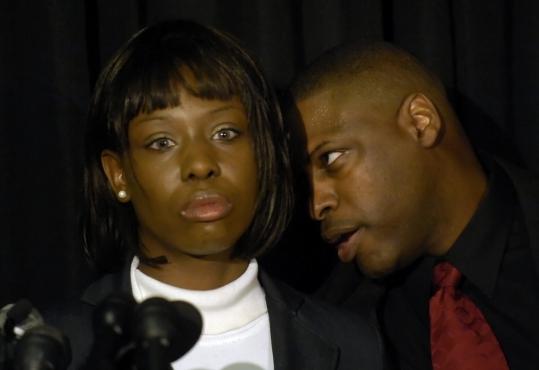 DURHAM, N.C. - The woman whom prosecutors determined falsely accused three Duke lacrosse players of rape maintains in a new memoir that she was attacked, which provoked an angry lawsuit threat from one player's family.

Crystal Mangum, who appeared publicly yesterday for the first time since making the allegations more than two years ago, says in her book being made available online today that she is not "looking forward to opening old wounds," but that she had to defend herself.

"Even as I try to move on with my life, I still find it necessary to take one more stand and fight," she writes in an excerpt of the book, "The Last Dance for Grace: The Crystal Mangum Story."

"I want to assert, without equivocation, that I was assaulted. Make of that what you will. You will decide what that means to you because the state of North Carolina saw fit not to look at all that happened the night I became infamous."

Mangum's remarks drew an immediate rebuke from the attorneys of two of the men she accused, and the family of one exonerated player said they were considering a lawsuit. Jim Cooney, who represented Reade Seligmann in the criminal case, said attorneys would review the contents of the book.

Mangum told police that she was attacked at a March 2006 lacrosse team party where she was hired to perform as a stripper. After a disastrous local prosecution that eventually led to downfall of the district attorney, the state attorney general's office concluded there was no credible evidence an attack occurred.

The state's investigation found there was no DNA evidence, medical evidence, or witness accounts that confirmed Mangum's story. The inconsistencies in Mangum's account, the state said, "were so significant and so contrary to the evidence that the state had no credible evidence that an attack occurred in the house that night."

Mangum declined to answer questions about case's details yesterday, including when she was asked directly whether Seligmann, Dave Evans, and Collin Finnerty - the three cleared players - attacked her. Vincent Clark, coauthor and publisher of the book, said repeatedly that "the case is closed," and that Mangum accepts the conclusions of state prosecutors.

"At this point, it doesn't really matter," Mangum said. "What matters is for people to know my account of what happened and for all of us to learn from it."

Seligmann's father, Phil Seligmann, called Mangum's comments "simply a pathetic attempt to further her need to remain in the public eye at the expense of demonstrably innocent individuals."

"Her incoherent passages are not based on facts, but are quite simply false ramblings," Seligmann said in a statement.

"No crime of any kind took place involving Ms. Mangum or any member of the Duke men's lacrosse team. We are presently evaluating all available legal options. If Ms. Mangum and those associated with her continue to slander Reade, we will have no choice and will not hesitate to utilize these options."

An attorney who defended Evans also was quick to denounce Mangum's remarks, saying her allegation hurt the players, the state, and all women who have been victims of sexual assault. "If Crystal Mangum truly wants to heal, get on with her life, and have others learn from her experiences, she would admit her lies and the damage they did," Joseph Cheshire said in an e-mail.