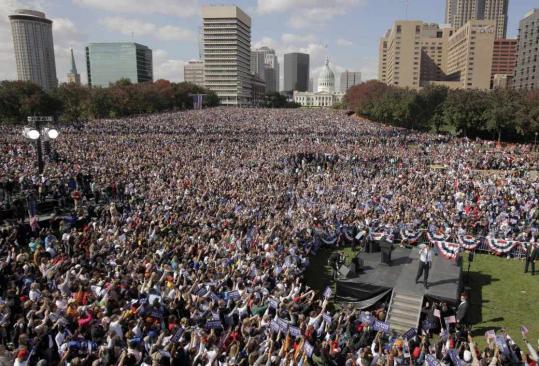 ST. LOUIS - In an outbreak of class warfare, John McCain and Barack Obama swapped sharply worded charges over tax cuts yesterday, each accusing the other of shortchanging middle-income Americans at a time of economic hardship for millions.

McCain, trailing in the polls, fired the first volley, likening his rival to the socialist leaders of Europe and saying he wanted to "convert the IRS into a giant welfare agency, redistributing massive amounts of wealth at the direction of politicians in Washington."

McCain added, "Raising taxes on some in order to give checks to others is not a tax cut; it's just another government giveaway."

Obama responded a few hours later in an appearance before an enormous crowd, saying his Republican rival "wants to cut taxes for the same people who have already been making out like bandits, in some cases literally."

McCain has become increasingly aggressive in debates, appearances, and - in the last few days - automated phone calls as the polls suggested he was falling behind nationally as well as in several battleground states.

Obama spent the day in Missouri, a bellwether state that voted for President Bush in 2004. Campaign aides, citing local police, estimated 100,000 people turned out to hear him at the Gateway Arch on a sunny day.

McCain leveled his most critical rhetoric of the day in a paid weekly radio address, and he campaigned later in North Carolina and Virginia, a pair of traditionally Republican states he is struggling to hold. Aides estimated his North Carolina crowd at 4,000 to 5,000, a number he matched later in the day during an outdoor appearance in Woodbridge, Va.

Palin and Fey cross paths during opening skit of 'SNL'
Those who changed the channel from the Red Sox game to Governor Sarah Palin's appearance on "Saturday Night Live" were treated to a short, funny opening skit. The first scene had Tina Fey, as Palin, holding a press conference. The camera then showed the actual vice presidential candidate watching Fey's impersonation alongside Lorne Michaels, creator and executive producer of "SNL." Palin and Michaels were then interrupted by Mark Walhberg, the Boston native and actor, who was outraged by the way he was portrayed in a previous "SNL" skit in which Andy Sandberg impersonated him talking to animals.

Alec Baldwin then approached Palin and Michaels with some sharp criticism of Palin, who he mistook for Fey. After the awkward moment of Baldwin realizing he was talking to the real thing, Palin let the audience know that her favorite Baldwin brother is Stephen. Then, Baldwin escorted her offscreen and appeared to whisper in Fey's ear that the real Palin was coming. Fey left the podium, passing by Palin, who stepped to the microphone to deliver the classic line, "Live from New York, it's Saturday Night."

McCain has strong chance in 'Real Va.,' aide asserts
WOODBRIDGE, Va. - A top aide to John McCain said yesterday that the Republican presidential nominee still has a strong chance of winning the state because of his support in "real Virginia," the downstate areas far removed in distance and political philosophy from the more liberal areas of the northern part.

"As a proud resident of Oakton, Va., I can tell you that the Democrats have just come in from the District of Columbia and moved into northern Virginia," Nancy Pfotenhauer, McCain senior adviser, said on MSNBC. "And that's really what you see there. But the rest of the state, real Virginia, if you will, I think will be very responsive to Senator McCain's message."

One recent poll showed suggested that McCain was trailing Barack Obama by up to 8 percentage points in the state, but political analysts believe the race may be closer.