As McCain flags in N.H., Palin calls for a comeback 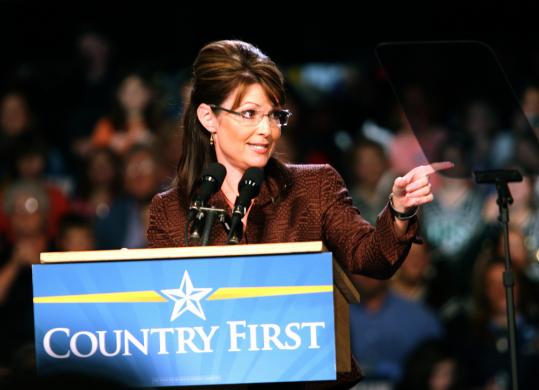 Sarah Palin addressed supporters at a rally yesterday at Dover High School in Dover, N.H. Below, she spoke at an outdoor rally in Laconia, N.H., before a crowd of more than 2,000. (Globe Staff Photo / Essdras M. Suarez)
By Brian C. Mooney Globe Staff / October 16, 2008
Text size – +

"Granted, we're coming from behind, but it can be done," Palin, on her first campaign swing in New England as McCain's running mate, told a crowd of more than 2,000 on a brilliant fall afternoon with Lake Winnipesaukee as the backdrop.

Recalling the New Hampshire primary in January, when McCain mounted a comeback on his way to winning the GOP nomination, Palin said: "The critics had counted him out . . . written him off. But you turned the underdog into the victor. Let's do it again."

McCain has fallen behind Democrat Barack Obama in national polls and by double digits in some surveys in New Hampshire, once a Republican redoubt that has turned more Democratic in recent years.

Palin made an unabashed appeal to Granite Staters' pride, praising the natural beauty of the state, the still-vibrant foliage, and residents' love of the outdoors. She likened New Hampshire to the state where she is governor.

"You're a lot like the people of Alaska," she said at one point, then suggested Alaska borrow the New Hampshire motto of "Live Free or Die."

Gone from Palin's speech were the harsh criticisms of Obama that questioned his associations and authenticity and that had stoked crowds who at times became surly in their anti-Obama comments. The New Hampshire audiences booed lustily when Palin said Obama would raise taxes and increase federal spending, but except for chants of "USA" and a lone cry of "socialist" during an event in Dover, the crowds yesterday seemed merely enthusiastic in their partisanship.

After the Laconia rally, however, two men said they were roughed up by McCain supporters after they began chanting Obama's name. One had a black eye with a trace of blood, and they said they complained to police. A Laconia police spokesman said the two men had disrupted the event and had been ejected.

Palin spent a large section of her remarks highlighting McCain's new proposals aimed at helping families and businesses recover from the economic downturn - "instead of giving billions and billions to the Wall Street bankers and brokers." McCain's plan calls for a temporary cut in both the capital gains tax and lower taxes on most withdrawals from retirement accounts, plus an end to income taxes on unemployment benefits.

She drew nods of agreement from some with her assertion that, since the birth of her son, Trig, with Down syndrome six months ago, she and her husband, Todd, make a distinction between "God's standards of perfection" and those established by society. Palin said that if she becomes vice president, families with relatives who have special needs "will have a friend and advocate in the White House." But in a speech that pledged to balance the budget and freeze nonessential federal spending, she offered no specifics about any new federal policies or programs.

The first-term Alaska governor has come under withering scrutiny and been criticized for her attacks on Obama, but she remains a drawing card for admirers and a curiosity to others who attended yesterday's rallies in New Hampshire: a morning event at Dover High School's gym that drew about 1,500, the Laconia gathering, and a much larger outdoor event last evening at Salem High School.

At the event in Dover, not far from the seacoast, many in attendance were from Massachusetts or Maine. Many of those interviewed said they are independents, or undeclareds, as they are known in New Hampshire, a state with a deep libertarian streak and where conservatism has long been defined more in terms of economic rather than social issues. Most were impressed by Palin.

"I think she's fresh, not like a politician in Washington," said Charles Sloane of Rochester, a retired civilian employee at the Portsmouth Naval Shipyard, who was among hundreds turned away when the Dover gym reached its fire safety capacity.

"She's feisty and a breath of fresh air," said Cynthia Hill of Somersworth after the Dover rally. She said she supports Palin even though they differ sharply on a key issue; Hill favors abortion rights, which Palin opposes even in cases of rape and incest.

Michael Shaw, an accounting manager from Enfield, Conn., said he drove more than 200 miles to see Palin in Laconia, after being shut out of tickets for the Dover event.

Shaw said he's even more convinced that she has been treated unfairly after seeing Palin speak in person.

"She's the bomb," said Shaw, an independent who said he plans to vote for McCain. "She's getting beat up left and right. Look at what the media are doing to her, like the 'Saturday Night Live' skits. They treat her like she's a baboon, like she doesn't have a brain."

Scott LaPierre of boston.com contributed to this report.