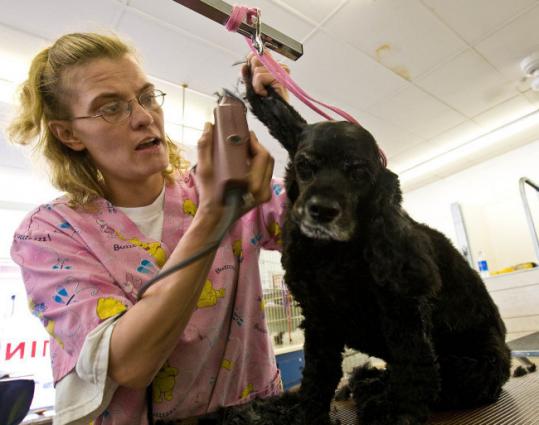 SPARKS, Nev. - Low clouds hung over Washoe County on Friday, darkening the tawny Sierra foothills; the pink roses and yellow mums dotting the yards of the ranch-style houses here seemed to glow. Pausing to consider the presidential race as he walked his two daughters from their elementary school to his waiting SUV, Pete Saenz shook his head.

A sales representative for Wrangler, he wonders whether the small shop owners who buy his jeans will be able to hang on if the economy deteriorates. The flux in the stock market has not hurt him as much as it has some, but he can no longer bear to look at his 401(k). Saenz, originally from Texas and a lifelong Republican, said he is voting for Democrat Barack Obama this year.

"I think you see disaster going on financially," he said. "We need a change. That's it, plain and simple. He may not have the best experience, but this country needs a change."

Last week, as the economy slipped further toward recession, the momentum seemed to be shifting in places such as Nevada, a swing state that went for George W. Bush in 2000 and 2004 and has been seen as promising turf for Senator John McCain for months. With the highest foreclosure rate in the nation, a tourism industry damaged by rising food and energy prices, and an unemployment rate at a 23-year high, Nevada is, according to polls, edging Obama's way. The Real Clear Politics average of national polls showed the Illinois senator up by 1.8 percent.

In interviews around the Reno area last week, voters expressed a mix of disgust and relief about the $700 billion bailout package - and a good deal of bafflement about what it would do and whether it would work. They said they saw little daylight between the candidates' positions on the financial crisis, and many were not convinced that Obama is an ideal candidate. But voter after voter said that in this economy, they were willing to give him the benefit of the doubt.

The race in Nevada seems destined to be close. Thanks to exponential population growth, this land of desert, mountains, and blinking casino strips has become politically unpredictable in the last generation. Bill Clinton won here twice, before the two narrow Bush wins this decade. As a Westerner, veteran, and self-styled maverick, McCain fits the state's traditional sensibility, as does his running mate, Governor Sarah Palin of Alaska. Ed Rogers, a 65-year-old Republican from Reno who speaks casually about catching errant rattlesnakes on his property with a stick, depositing them in a small cooler, and setting them free in the hills, is especially fired up about her.

"She took on the good old boys," he said. "She's a true person; nothing phony about her."

A combination of rapid growth and aggressive voter registration efforts has resulted in Democrats turning a disadvantage of 3,000 registered voters in 2004 to an advantage of 80,000 voters this year. Obama has been campaigning here aggressively since the January caucuses.

The race could be decided in Washoe County, a swing county that stretches from Reno up to the Oregon border, home to an eclectic mix of independent-minded native Nevadans, Californians seeking a cheaper retirement, and young families from across the country attracted by the once flourishing construction and tourism industries.

But the housing boom that sent vast new tracts of one-story homes skittering up the sagebrush-covered hills has stopped short. The foreclosure rate exceeds the national average. Housing values have plummeted, and the county unemployment rate was at 6.6 percent in August, a half-percentage point higher than the national average, and is expected to grow.

The pain is being felt across the economy. At her pet-grooming shop in Sparks, Kari Williams, 33, has helped find homes for some 30 dogs belonging to clients who could no longer afford to care for their animals. Business has slowed, and after five prosperous years, she has fallen behind on her commercial rent.

Williams suspects the bailout package will do little to help her business. She is not sure that either of the presidential candidates really knows how to help the economy. But Williams, an undeclared voter, is leaning in favor of Obama, partly because she considers Palin unqualified, and partly because she thinks McCain is too friendly to big business.

"Obama at least knows what it's like to be a normal person - he grew up that way," she said. "I don't think McCain knows how the rest of us live."

Maureen Ruff, a 52-year-old Republican, is relieved the bailout bill is passed but wants more regulation of the mortgage and banking industries. But she is rattled and uncertain about which candidate to trust. An empty nester who cannot sell her house, she thinks Obama might have a better understanding of the economy and may be more sympathetic to the middle class, but isn't sure whether he "just gets up on the soap box" and tells voters what they want hear. McCain, on the other hand, "might be an extension of Bush."

For more libertarian-minded Nevadans, government intervention in the markets is anathema.

"We shouldn't have a financial bailout package at all," said Clint Wells, a 68-year-old manager of a mechanic shop in Reno, where he has lived all his life. "Let it crash!"

He's voting for McCain, "the lesser of two evils," he says, because he sees Obama as an economic disaster waiting to happen.

"He's going to tax the daylights out of the American public," he said.

David Haskins, 62, and his wife Judy, 67 - Republicans who live in Sparks - were disappointed in McCain for supporting the bailout, which they see as "socialism," but they are encouraged by his choice of Palin and believe the GOP ticket is the best choice to lead the country.

"The general political philosophy is less government, less taxes, and less intervention by the government," David Haskins said. "Our founding fathers never envisioned government to be so involved in business."

But the recent economic trauma seems to have left more voters calling for more government, not less.

Ron Berry, a 62-year-old retired health inspector, cashed out on his home in Northern California a few years ago and bought a large home east of Reno. But his fledgling concession business isn't prospering in Nevada. He wants to go back, but he cannot sell his house.

Berry despises the "culture of greed" in the mortgage and banking industry that led to the suffering around him. He worries that "the fat cats" will emerge unscathed, while "the common person gets the bill."

Berry is a Democrat, but he voted for Ronald Reagan twice, and he says he would be tempted to back McCain this time. A Vietnam veteran, he feels a deep kinship with other veterans. He was actually serving on the USS Oriskany on the day McCain took off from the vessel on his last, near-fatal mission. But he plans to vote for Obama.