Senator grew to champion the industry 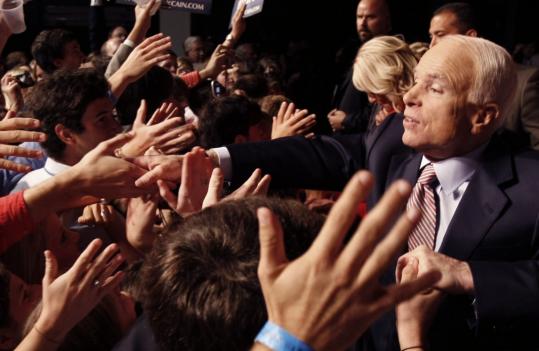 NEW YORK - Senator John McCain was on a roll. In a room reserved for high-stakes gamblers at Foxwoods Resort Casino in Connecticut, he tossed $100 chips around a hot craps table. When the marathon session ended about 2:30 a.m., the Arizona senator and his entourage emerged with thousands of dollars in winnings.

A lifelong gambler, McCain takes risks, both on and off the craps table. He was throwing dice that night not long after his failed 2000 presidential bid, in which he was skewered by the Republican Party's evangelical base, opponents of gambling. McCain was betting at a casino he oversaw as a member of the Senate Indian Affairs Committee, and he was doing so with the lobbyist who represents that casino, according to three associates of McCain.

The visit had been arranged by the lobbyist, Scott Reed, who works for the Mashantucket Pequots, a tribe that has contributed heavily to McCain's campaigns and built Foxwoods into the world's second-largest casino. Joining them was Rick Davis, McCain's campaign manager. Their night of good fortune epitomized not just McCain's affection for gambling, but also the close relationship he has built with the gambling industry and its lobbyists during his 25-year career in Congress.

As a two-time chairman of the Indian Affairs Committee, McCain has done more than any other member of Congress to shape the laws governing America's casinos, helping to transform the once-sleepy Indian gambling business into a $26-billion-a-year behemoth with 423 casinos across the country. He has won praise as a champion of economic development and self-governance on reservations.

"One of the founding fathers of Indian gaming" is what Steven Light, a University of North Dakota professor specializing in Indian gambling, called McCain.

As factions of the ferociously competitive gambling industry have vied for an edge, they have found it advantageous to cultivate a relationship with McCain or hire someone who has one, according to an examination based on more than 70 interviews and thousands of pages of documents.

McCain portrays himself as a Washington maverick unswayed by special interests, referring recently to lobbyists as "birds of prey." Yet in his current campaign, more than 40 fund-raisers and top advisers have lobbied or worked for an array of gambling interests - including tribal and Las Vegas casinos, lottery companies, and online poker purveyors.

When rules being considered by Congress threatened a California tribe's planned casino in 2005, McCain helped spare the tribe. Its lobbyist, who had no prior experience in the gambling industry, had a nearly 20-year friendship with McCain.

In Connecticut that year, when a tribe was looking to open the state's third casino, staff members on the Indian Affairs Committee provided guidance to lobbyists representing those fighting the casino, e-mail messages and interviews show. The proposed casino, which would have cut into the Pequots' market share, was opposed by McCain's colleagues in Connecticut.

McCain spokesman Tucker Bounds would not discuss the senator's night of gambling at Foxwoods, saying: "Your paper has repeatedly attempted to insinuate impropriety on the part of Senator McCain where none exists - and it reveals that your publication is desperately willing to gamble away what little credibility it still has."

Cynthia Shaw, who served as Republican counsel to the committee from 2005 to 2007, said McCain made decisions based on merit, not special interests. "Everybody got a meeting who asked for one," Shaw said, "whether you were represented by counsel or by a lobbyist - or regardless of which lobbyist."

Over his career, McCain has taken on special interests, like big tobacco, and angered the capital's power brokers by promoting campaign finance reform and pushing to limit gifts that lobbyists can shower on lawmakers. On occasion, he has crossed the gambling industry on issues like regulating slot machines.

Perhaps no episode burnished McCain's image as a reformer more than his stewardship three years ago of the congressional investigation into Jack Abramoff, the disgraced Indian gambling lobbyist who became a national symbol of the pay-to-play culture in Washington. The senator's leadership during the scandal set the stage for the most sweeping overhaul of lobbying laws since Watergate.

"I've fought lobbyists who stole from Indian tribes," the senator said in his speech accepting the Republican presidential nomination this month.

But interviews and records show that lobbyists and political operatives in McCain's inner circle had played a behind-the-scenes role in bringing Abramoff's misdeeds to McCain's attention - and then cashed in on the resulting investigation. The senator's longtime chief political strategist, for example, was paid $100,000 over four months as a consultant to one tribe caught up in the inquiry, records show.

McCain's staff said the senator's investigation of Abramoff had posed "grave risk to his political interests."

The statement said the senator "saw his role as chairman of the Senate Indian Affairs Committee as protecting the interests of Native Americans by seeking to provide greater fairness, transparency, and consistency in the regulatory process."

As public opposition to tribal casinos has grown in recent years, McCain has distanced himself from Indian gambling, congressional and American Indian officials said. But he has rarely wavered in his loyalty to Las Vegas, where he counts casino executives among his close friends and most prolific fund-raisers. "Beyond just his support for gaming, Nevada supports John McCain because he's one of us, a Westerner at heart," said Sig Rogich, a Nevada Republican king maker who raised nearly $2 million for McCain at an event at his home in June.

In one of their last conversations, US Representative Morris K. Udall, Arizona's powerful Democrat, whose devotion to American Indian causes was legendary, implored his friend McCain to carry on his legacy.

"Don't forget the Indians," Udall, who died in 1998, told McCain in a directive that the senator has recounted to others.

More than a decade earlier, Udall had persuaded McCain to join the Senate Indian Affairs Committee. McCain, whose home state has the third-highest Indian population, eloquently decried the "grinding poverty" that gripped many reservations.

The two men helped write the Indian Gaming Regulatory Act of 1988 after the Supreme Court held that states had virtually no right to control wagering on reservations. The legislation provided a framework for the oversight and growth of Indian casinos: In 1988, Indian gambling represented less than 1 percent of the nation's gambling revenues; today it captures more than one third.

On the Senate floor after the bill's passage, McCain said he personally opposed Indian gambling, but when impoverished communities "are faced with only one option for economic development, and that is to set up gambling on their reservations, then I cannot disapprove."

In 1994, McCain led an amendment that enabled dozens of additional tribes to win federal recognition and open casinos. And in 1998, McCain fought a Senate effort to rein in the boom.

He also voted twice in the last decade to give casinos tax breaks estimated to cost the government more than $326 million over a dozen years.

The first tax break benefited the industry in Las Vegas, one of a number of ways McCain has helped nontribal casinos. J. Terrence Lanni, the chief executive of the casino, said an unsuccessful bid by the senator to ban wagering on college sports in Nevada was the only time he could recall McCain's opposing Las Vegas.

The second tax break helped tribal casinos like Foxwoods and was pushed by Scott Reed, the Pequots' lobbyist.

But a decade after McCain coauthored the Indian gambling act, the political tides had turned. Tribal casinos became increasingly unpopular around the country for reasons as varied as morality and traffic.