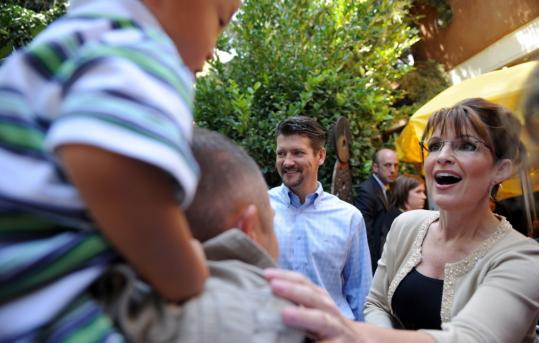 WASHINGTON - Three of the politicians seeking the nation's highest offices appeared in lengthy broadcast interviews yesterday, but the hottest topic for all of them was the missing fourth candidate - Republican vice presidential nominee Sarah Palin.

Palin, the Alaska governor who was selected more than a week ago to be Senator John McCain's running mate, has yet to make an unscripted public appearance. Instead, she has used her public events to deliver speeches, not to answer questions directly from voters or reporters.

Palin will start doing interviews "within the next few days," McCain said on CBS's "Face the Nation." A McCain aide said Palin will be interviewed in Alaska by Charles Gibson of ABC News over two days, most likely Thursday and Friday, the Associated Press reported.

"She's not scared to answer questions," McCain campaign manager Rick Davis said on "Fox News Sunday." "But you know what? We run our campaign, not the news media. And we'll do things on our timetable."

"Why would we want to throw Sarah Palin into a cycle of piranhas called the news media that have nothing better to ask questions about than her personal life and her children?" Davis said. "So until at which point in time we feel like the news media is going to treat her with some level of respect and deference, I think it would be foolhardy to put her out into that kind of environment."

Appearing on ABC's "This Week," the Democratic presidential nominee, Senator Barack Obama, praised Palin as a "skilled politician" but said McCain's decision to put her on his ticket was more evidence that they would continue the Bush administration's policies.

"It tells me that he chose somebody who may be even more aligned with George Bush - or Dick Cheney or the politics we've seen over the last eight years - than John McCain himself is," Obama said.

McCain defended his running mate, noting that she is galvanizing his core supporters and has brought new excitement to the campaign. "We've been campaigning together - the electricity has been incredible," he said.