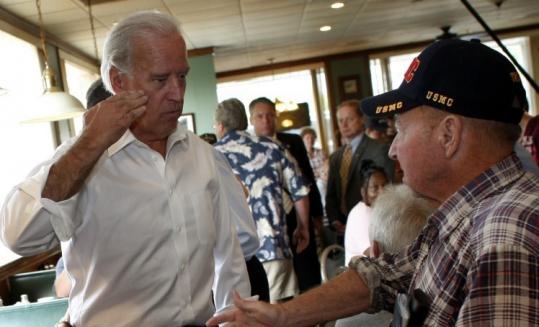 ST. PAUL - John McCain introduced newly selected running mate Sarah Palin to voters in battleground Pennsylvania yesterday as they wound their way toward St. Paul and a Republican National Convention where the mood was suddenly threatened by Hurricane Gustav.

Gulf state delegates could decide to remain at home if the storm threatens to bring serious damage. It could also affect tomorrow's opening-night address by President Bush. Gustav's projected path suggests that it will make landfall tomorrow afternoon on Louisiana's central coast.

Said McCain: "You know it just wouldn't be appropriate to have a festive occasion while a near tragedy or a terrible challenge is presented in the form of a natural disaster, so we're monitoring it from day to day and I'm saying a few prayers, too."

He commented in an interview taped for "Fox News Sunday."

Democratic presidential nominee Barack Obama, in his first direct comment on McCain's unexpected running-mate choice, said he had called her on Friday to wish her luck "but not too much."

McCain and Palin made a morning stop at Tom's Diner in Pittsburgh's trendy Southside neighborhood. The running mates, with spouses in tow, greeted patrons and posed for pictures. Palin's daughters Willow and Piper were also on hand, with Willow carrying Palin's 4-month old son, Trig.

The first-term Alaska governor told reporters she was having fun in her new role. "It's great to see another part of the country," she said. She also said she'd managed to get a little sleep during the night.

"We're used to not getting too much sleep," she said, nodding her head toward the sleeping infant.

The Democratic team of Obama and Joe Biden also began their day with a diner stop - in the Youngstown, Ohio, suburb of Boardman - as they pressed on with their post-Democratic convention bus tour of Rust Belt battleground states.

Obama said in a television interview that he had wished Palin luck "but not too much luck on the campaign trail" in a brief congratulatory phone call on Friday. He told CBS' "60 Minutes" he had yet to meet Palin but "she seems to have a compelling life story. Obviously, she's a fine mother and an up-and-coming public servant."

Of his own choice for a ticket-mate, Obama said Biden "can step in and become president. And I don't think anybody has any doubt about that."

He also said he wanted the "counsel and advice of somebody who's not going to agree with me 100 percent of the time." The Delaware senator, who chairs the Senate Foreign Relations Committee, has a reputation for outspokenness. "Joe Biden doesn't bite his tongue," Obama said in the interview that was taped Friday night in Pittsburgh.

During their diner stop, Obama and Biden and their wives chatted with patrons and told reporters they hoped the lessons learned from Hurricane Katrina would help the Gulf Coast this time.

"Hopefully we've learned from that tragedy," Obama said. Biden said the region was much better prepared than before Katrina. "Just pray to God that those levees hold," he said.

With memories still vivid of the devastation wrought by hurricanes Katrina and Rita in 2005, the possibility of serious damage threatened to cast a pall over the convention. CNN reported yesterday that Gulf Coast governors Bobby Jindal of Louisiana, Haley Barbour of Mississippi, Rick Perry of Texas, and Charlie Crist of Florida decided they would not to attend the convention.

Bush, faced with the chance of another devastating hurricane during his presidency, called Gulf Coast governors yesterday and conferred with federal officials to keep a close watch on developments, said spokesman Scott Stanzel.

The president has been widely criticized for the way the government dealt with Katrina and its aftermath.

But the convention was still on schedule in St. Paul.

Convention workers put up new barricades and closed off streets as Republicans made final preparations for the four-day GOP gathering at the Center. Workers inside the arena were putting finishing touches on the stage and checking red telephones installed in each delegation's seating area. The delegates' chairs were roped off.

Set-up crews and guards took a few seconds to take pictures of themselves in front of the large screen on the podium, which displayed an image of an American flag waving in the wind.