Harsh conditions cause many Border Patrol recruits to quit 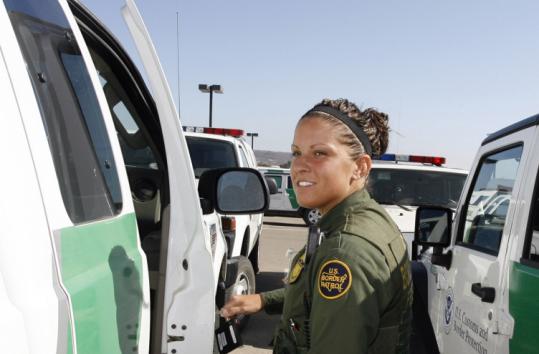 That message is never advertised in US Border Patrol recruitment brochures, but the sobering reality is that the jobs entail such a difficult working environment that about 30 percent of agents quit within 18 months.

"This has complications up and down the line," said Richard Stana, director of homeland security issues at the Government Accountability Office. "You're constantly in a recruiting mode. . . . If this population keeps churning, you're constantly training."

The Border Patrol's struggle to keep new hires has become more evident as the agency approaches President Bush's target of 18,000 agents by the end of the year, up from 12,000 two years ago and double the number from eight years ago. The hiring surge means 42 percent of agents have less than three years on the job.

The GAO estimates that taxpayers pay $14,700 for each trainee at the Border Patrol Academy in Artesia, N.M. That 2006 figure does not include the many additional hours that senior agents spend training hires during a two-year probationary period.

Money aside, a revolving door means a large percentage of the force will always be inexperienced.

"You've got to fill the slots, but you want quality people who are not going to leave," said Jeremy Wilson, associate director of the Center for Quality Policing at the Rand Corporation. "You don't want to spend time and resources on someone if they're just going to up and leave."

About 20 percent of Border Patrol recruits don't graduate from the academy, which lasts up to 95 days for trainees who need to learn Spanish. More leave after going to their stations.

The attrition rate for entry-level agents - generally those who have been on the job for 18 months or less - is 29.6 percent since October, up from 23.7 percent during the previous 12-month period and 22.7 percent the year before, the agency said.

Senior agents tend to stay put, but the growing number of newcomers has raised the Border Patrol's overall attrition rate to 10.9 percent since October, up from 9.6 percent during the previous 12-month period and 6.7 percent the year before.

US Representative Loretta Sanchez, a California Democrat, said the attrition rate signals a need to slow hiring. The Border Patrol chief should be given "a bit of breathing space to find the right recruits," she said.

Border Patrol officials said they are not bothered. They insist that the agency's growth has made it easier to get promoted and more likely that new hires will get to pick where they want to work along the Mexican border.

"In any job or any career, the first year or two you're learning whether it's for you," Assistant Chief Michael Olsen said.

The Border Patrol warns recruits that their first assignments are often in small, isolated towns, some with poor schools and medical care.

The heat can be stifling in places like Calexico, Calif., where the average daily high temperature is 104 degrees in July.

Some recruits get homesick. New hires must work on the Mexican border. After two years, they can seek a transfer to the Canadian border or to Washington, D.C., but competition for those jobs can be fierce.

"If you're from Kansas, you're not going home," said Quinn Palmer, a Border Patrol spokesman in El Centro, Calif.

Mike Fisher, the Border Patrol's San Diego sector chief, had never been west of Cleveland when he got his first assignment in Douglas, Ariz. He was warned about the heat and the long drive to Phoenix, but no words could have prepared him.

"It's a huge culture shock," he said.

The high cost of living is a drawback in San Diego. A Border Patrol agent starts at $36,658 a year, although overtime can increase pay up to 25 percent. After three years, pay can approach $70,000 a year, including overtime.

Boredom is another job hazard. Agents in Imperial Beach wait alone in parked jeeps and pickups, waiting for migrants to jump the border fence and make a run for the nearest patch of stores and homes.

Darin Bowdin of Sacramento, who joined the station almost two years ago, wants to be promoted to a special unit - like all-terrain vehicle, horseback, boat patrol, or SWAT-style teams - but those jobs are off-limits until he finishes two years.

For now, the 27-year-old says: "I've just got to sit my time on the line watching the fence."

The agency is going to extraordinary lengths to find applicants. It is sponsoring NASCAR and professional bull-riding contests. Specialized teams focus on hiring women and African-Americans.