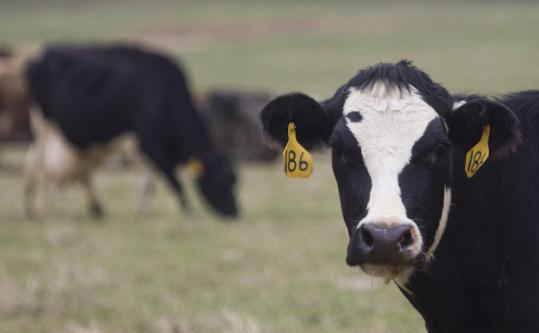 WASHINGTON - Talk about animal magnetism: Cows seem to have a built-in compass.

Somehow, cattle seem to know how to find north and south, say researchers who studied satellite photos of thousands of cows around the world.

Most cattle that were grazing or resting tended to align their bodies in a north-south direction, a team of German and Czech researchers reports in today's issue of Proceedings of the National Academy of Sciences.

And the finding held true regardless of what continent the cattle were on, according to the study led by Hynek Burda and Sabine Begall of the faculty of biology at the University of Duisburg-Essen in Germany.

"The magnetic field of the Earth has to be considered as a factor," the scientists said.

This challenges scientists to find out why and how these animals align to the magnetic field, Begall said via e-mail.

The study sent Tina Hinchley, who with her husband, Duane, operates a dairy farm at Cambridge, Wis., to take a new look at an aerial photo taken of their farm a few years ago. "The cows that were in the pasture were all over the place . . . about two-thirds were north-south," Hinchley said.

Two-thirds is close to what the researchers found in their look at 8,510 cattle in 308 pastures. In the study, 60 percent to 70 percent of cattle were oriented north-south, which Begall called a "highly significant deviation from random distribution."

Hinchley stressed that one factor that needs to be considered is cow comfort.

"They don't like to get hot. Their body temperature is 102, and they are wearing black leather jackets, literally! If turning north-south would keep them cooler, they would stand that way."

The research team noted that in very windy conditions cattle tend to face the wind, and have been known to seek out the sun on cold days. But they said they were able to discount weather effects in the study by analyzing clues such as the position of the sun based on shadows.

"This is a surprising discovery," said Kenneth J. Lohmann of the biology department at the University of North Carolina. However Lohmann, who was not part of the research team, cautioned that "the study is based entirely on correlations. To demonstrate conclusively that cattle have a magnetic sense, some kind of experimental manipulation will eventually be needed."