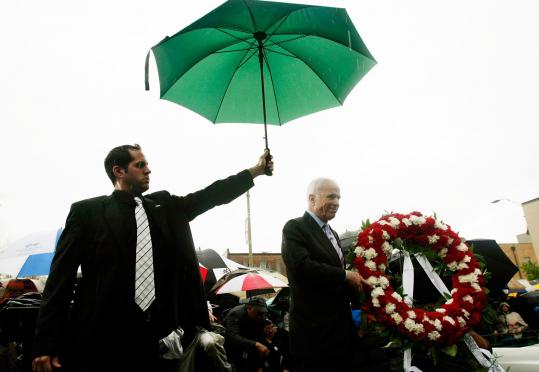 PHOENIX - As he prepared to seek reelection in 1984, Representative John McCain made an unlikely appeal to identity politics, turning to a slogan that asserted the first-term congressman was "getting results for ALL Arizonans."

His campaign literature boasted that McCain had visited all of the state's 20 tribal reservations "to seek solutions to problems facing Native Americans" and had voted against a controversial 1984 bill that would have cracked down on employers of illegal immigrants because it would "discriminate against Hispanics."

"He always was for the underdog," said Jay Smith, a consultant on McCain's early campaigns. "He wasn't a doctrinaire conservative Republican who didn't have compassion for groups of people who didn't have it made."

McCain's campaign literature did not, however, mention the concerns of the state's small but well-organized African-American community. A year earlier, McCain was among 90 of 435 US House members who opposed recognizing the Rev. Martin Luther King Jr.'s birthday, arguing the federal government did not need another holiday.

"There was a perception I had from the beginning that he did not relate to, or get involved with us," said former city councilman Calvin Goode, who is African-American. "I'm a lifetime member of the NAACP here in Phoenix and I've never seen him come around."

McCain's focus reflected the demographics of a state where less than 4 percent of residents are black. By contrast, more than one-third of Arizona is either Latino or Native American, creating a desert canvas where racial divides are sketched less in black and white than hues of brown and red.

"I'm not particularly proud of my record with African-Americans, mainly because I'm a senator from a state where the African-American population is small," McCain told the Globe during his 2000 presidential bid.

Facing Barack Obama, his first serious minority opponent, in this year's presidential race, McCain has made gestures to compete for minority votes, including a visit to Memphis on the 40th anniversary of King's assassination to apologize for his opposition to the holiday.

But when McCain addressed the NAACP and National Urban League, African-American audiences heard none of the promises of personal solidarity McCain delivered to Latino interest groups, where he described fallen soldiers named Hernandez and Lopez as "my brothers and sisters."

McCain's upbringing and early life were forged in the culture of the Navy, where racial issues were subsumed under a rigid command structure. He graduated from a segregated private high school in Virginia the year of Brown v. Board of Education, but devotes only two sentences in his memoir to noting that "The Episcopal High School class of 1954 was all male and all white." He was stationed abroad for the entirety of the 1960s, missing racial progress and tumult at home.

"There's a standard mantra of race-neutrality in the military: A lot of people say when you wear the uniform, it's either green or light green, not black and white," said John Karaagac, the author of "John McCain: An Essay in Military and Political History."

But in Arizona, where McCain settled in 1981, Latinos and Native Americans were prominent constituencies, although politically hard to reach and usually allied with Democrats.

McCain quickly made major symbolic moves to identify with both groups. He joined the Congressional Hispanic Caucus at the invitation of Bill Richardson, a New Mexico Democrat, and created his own Hispanic Advisory Committee, in part to help recruit Latinos into his office.

McCain took charge of the House Republican Task Force on Indian Affairs and accepted a seat on an Indian Affairs subcommittee because, he has said, "nobody else wanted it."

"Everybody told him, 'Don't do it, because no one cares except the tribes - and they are generally Democrats and are probably going to be upset with whatever you do,' " recalled Grant Woods, then McCain's chief of staff. "After he heard that about 10 times, he said, 'I'm going to do it.' "

McCain began touring reservations far from his district, invited to feast on Navajo tacos and march in parades alongside dignitaries like the Mazola margarine lady ("We call it maize").

"He worked the Navajo Nation. It's a thing other statewide elected officials failed to do," said Alberto Gutier, a Phoenix Republican who served in three gubernatorial administrations.

The contact reshaped McCain's congressional priorities. His first two pieces of legislation were to add a tribal representative to a government commission and to review reservation leases, and he spoke knowledgeably about substance abuse in Indian communities.

"On some poor reservations where the 'Hollywood' glamour drugs like cocaine do not exist, some Indian youth resort to using inhalants like gasoline, Sterno, and even household items such as Lysol spray," McCain said on the House floor.

McCain also traveled regularly to Guadulupe, a Spanish-speaking town south of Phoenix described at the time as Arizona's poorest.

"The town was only 5,000 people and maybe 700 votes, but he would come by," said Lauro Garcia III, whose father headed a prominent local community services organization. "He always struck me as a guy who would reach out."

During the 1980s, a rapid increase in the number of immigrants from Mexico changed the state's demographic mix. A new set of tensions drew many Arizona Republicans, traditionally libertarians concerned with resisting federal control over resources, into the culture wars.

McCain pushed back against the party's new drift. After the 1984 state Republican convention passed a resolution demanding that treaties with tribes be abrogated, McCain dismissed its backers as "extremists."

McCain's vote that year against an immigration bill he described as discriminatory put him to the left of his Democratic opponent, Harry Braun, who backed sanctions against employers for hiring illegal immigrants. "We need some amnesty provisions," McCain argued in a debate.

"Beginning in the '80s, McCain began to see opportunities reaching out to the ministers of the gospel and say, 'What can I do for you?' " said C.T. Wright, an Arizona Republican who once served as president of Cheyney University of Pennsylvania, the country's oldest historically black college.

McCain befriended some of the most prominent figures from the local civil-rights movement, including former Phoenix-area NAACP leaders Lincoln Ragsdale and George Brooks Sr."Their relationship was one of respect, even though they disagreed with regard to most political issues," said George Brooks Jr., Brooks's son.

In 1984, McCain pushed for Patterson, then a Democrat, to be named to the federal bench.

"He helped bridge the gap that we Republicans have with the black community and aided me in establishing an effective dialogue which transcends notions of party and race," McCain wrote to then-Senator Barry Goldwater, according to correspondence recently unearthed by the Arizona Republic.

Despite such relationships, African-American activists say McCain rarely demonstrated the same sensitivity to the delicate politics of civil rights when it came to their issues as he did with Latino and Native American ones - an assumption they say was confirmed when, in a recent interview, McCain suggested there hadn't been much of a black agenda in the '80s.

"At the time there weren't a lot of big issues involving the African-American community, except to say that when the Martin Luther King issue came up, I was on the wrong side of it," McCain told the Republic this spring.

In a 1982 draft policy statement, he offered an environmental rationale against busing students to achieve racial balance in schools. "As we are embarking on a national policy of energy conservation, I feel the costs are prohibitive," McCain wrote.

When McCain, who made public efforts to ensure that Latinos were represented on his congressional staff, was asked at a 1986 forum at Phoenix's Southminster Presbyterian Church why he had failed to do the same with blacks, he responded that he had yet to identify an African-American qualified for the job, according to two attendees. (McCain's campaign did not deny this account.)

"I recall that statement," said Bishop Henry Barnwell of First New Life Missionary Baptist Church in Phoenix. "I really chalked that up to ignorance."

McCain was most forcefully challenged over his opposition to a King holiday, both nationally and in Arizona, the last state to honor the civil rights leader. With the state facing a boycott that threatened tourist business and the right to host a Super Bowl, McCain recanted and joined an increasingly anxious business community to champion a 1992 referendum favoring the holiday.

"I don't think he appreciated fully how big of a positive impact it would make, and he does now," said Woods of McCain's initial opposition.

By then, McCain had lost contact with many of the civil-rights leaders he had set out to win over early in his career. "When he became a senator, he began to represent the state rather than the district, and those contacts were few. Then I didn't see him that much in the community," said Patterson. "He started out very well."