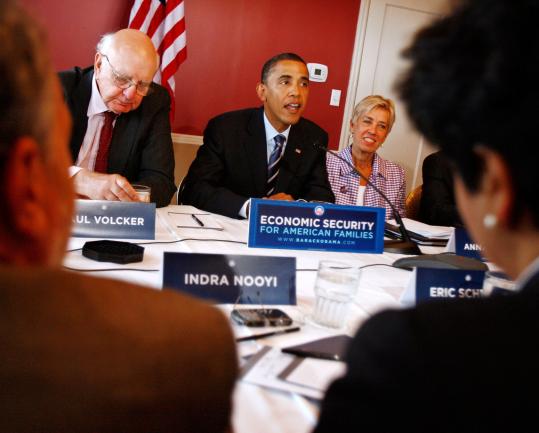 Turning to domestic problems after a week's tour of the Middle East and Europe, Obama met with more than a dozen economic advisers, appearing with them briefly before a two-hour closed meeting.

The new deficit numbers were the latest sign of an economy in decline, with foreclosures rising, home prices falling, soaring energy prices, and nearly a half-million job losses since January.

"It was not an accident or a normal part of the business cycle that led us to this situation," Obama said. "There were some irresponsible decisions that were made on Wall Street and in Washington."

Obama said the economy needs both short- and long-term fixes, including another round of "stimulus" measures from Congress to revive the economy and a longer-term focus on renewable energy to curb high gas prices and on universal healthcare to trim costs.

"We are also going to have to provide some short-term relief," Obama said. "People are hurting right now. We need to respond rapidly and vigorously to problems, and to anticipate the problems that may be on the horizon."

Republican John McCain said the culprit for the projected $490 billion deficit next year was the administration's wasteful spending.

"There is no more striking reminder of the need to reverse the profligate spending that has characterized this administration's fiscal policy," McCain said in a statement.

"As president, I have committed to balancing the budget by the end of my first term," said McCain, who also warned that Obama would strangle the economy by raising taxes. "Today's news makes that job harder but should not change our resolve to make the tough decisions and the genuine effort to reach across the aisle that are needed to ensure a lasting solution to the spending problem that threatens the very stability of our economy."

Obama has called for an aggressive course from Washington to stimulate the economy, and while he offered few details about his plans, he said the economy would be the focus of much of his attention in the three months until the election. Polls show he has the advantage on the issue over McCain.

"This is an emergency we feel not only when reading the Wall Street Journal, but when we travel across Ohio and Michigan, New Mexico, no matter where you meet people day after day who are one foreclosure, one illness, one pink slip away from economic disaster," he said.