Says global warming may be alleviated 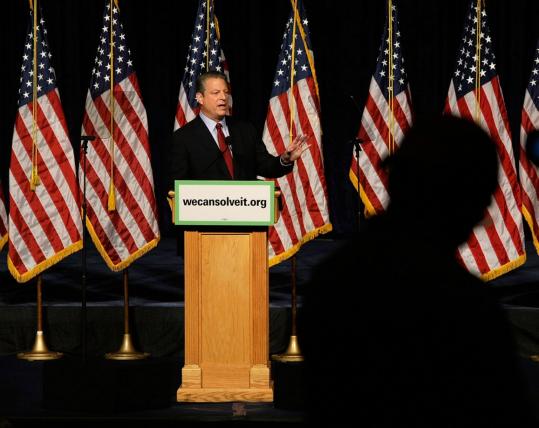 WASHINGTON - Former Vice President Al Gore challenged Americans yesterday to switch all of the nation's electricity production to wind, solar, and other carbon-free sources within 10 years, a goal that he said would solve global warming as well as economic and natural security crises caused by dependence on fossil fuels.

"The answer is to end our reliance on carbon-based fuels," Gore told a packed auditorium in Washington's historic Constitution Hall. "When you connect the dots, it turns out that the real solutions to the climate crisis are the very same measures needed to renew our economy and escape the trap of ever-rising energy prices."

Gore, who shared the Nobel Peace Prize last year for his fight against climate change, said he hopes the next president will embrace the goal, and he said fellow Democrat Barack Obama and Republican rival John McCain are "way ahead" of most politicians on the issue.

In a later interview with ABC News, Gore said he has no interest in being Obama's running mate and will focus on swaying public opinion on climate change.

Gore, one of the leaders of the Democratic Party and its presidential nominee in 2000, was noticeably nonpartisan in issuing his challenge. He not only said he had had substantive conversations with Obama and McCain, he also made a point of thanking Bob Barr, a former Republican congressman who is the Libertarian Party's presidential nominee.

Gore's ecumenical approach is intentional; he said to solve such a huge, complex issue as climate change, political leaders must move beyond partisan divisions.

Obama issued a statement saying he strongly agrees with Gore that "we cannot drill our way to energy independence, but must fast-track investments in renewable sources of energy like solar power, wind power, and advanced biofuels, and those are the investments I will make as president."

McCain is also calling for reducing dependence on foreign oil, and at a town hall meeting yesterday in Kansas City, Mo., echoed Gore's warning about sending hundreds of millions of dollars a day to unfriendly regimes. McCain said he admires Gore as an early and outspoken advocate on global warming, though they don't agree on all aspects.

McCain's plan, for instance, includes a significant expansion of nuclear power as well as wind and solar energy.

To meet his 10-year goal, Gore said nuclear energy output would continue at current levels while the United States dramatically increases its use of solar, wind, geothermal, and clean coal energy. Huge investments must also be made in technologies that reduce energy waste and link existing power grids, he said. He said the single most important policy change would be placing a carbon tax on burning oil and coal, with an accompanying reduction in payroll taxes.

Gore's proposal would represent a significant shift in where the United States gets its power. In 2005, the United States produced nearly 3.7 billion kilowatt hours of electricity, with coal providing slightly more than half of that energy, according to government statistics. Nuclear power accounted for 21 percent, natural gas 15 percent and renewable sources, including wind and solar, about 9 percent.

Coal's share of electricity generation is expected to grow in 2030, according to Energy Department forecasts, while renewable energy would only provide 11 percent of power.

Gore acknowledged the hurdles to reaching his goal. The Alliance for Climate Protection, a bipartisan group he leads, estimates the cost of transitioning to clean electricity sources at $1.5 trillion to $3 trillion over 30 years in public and private money.

But he said it would cost about as much to build greenhouse gas-polluting coal plants to meet demand.

Robbie Diamond, president of Securing America's Future Energy, a bipartisan think tank, said that weaning the nation away from fossil fuels - coal, oil, and natural gas - can't be done in a decade.

"The country is not going to be able to go cold turkey," Diamond said. "We have hundreds of years of infrastructure with trillions of dollars of investment that is not simply going to be made obsolete."

"But we cannot do the job with renewables and efficiency alone," it said, adding that the country also needs "an expanded role for nuclear energy, as well as natural gas and clean coal with carbon capture and storage."

Gore called for the kind of concerted national effort that enabled Americans to walk on the moon 39 years ago, just eight years after President John F. Kennedy set that goal.

Gore portrayed yesterday's speech as the latest and most important phase in his effort to influence public opinion.