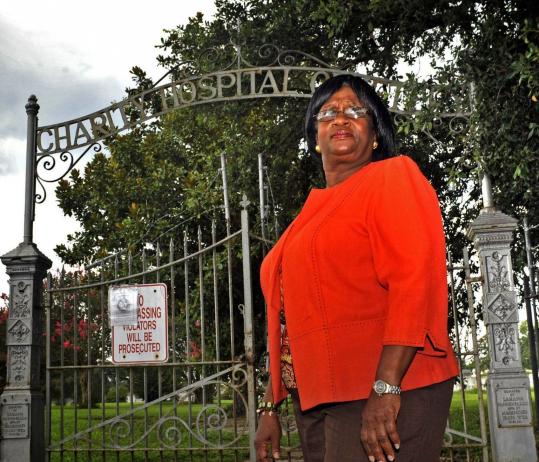 NEW ORLEANS - Between acres of above-ground tombs that are this marshy city's way to inter the dead, there is a strip of land that is an empty tribute to the victims of Hurricane Katrina.

Unknown to most in town, including the relatives of those who died in the storm, it is the chosen site for a memorial to an estimated 1,600 fatalities, and will serve as the resting place for 85 bodies that remain unclaimed nearly three years after the disaster. During a second-anniversary ceremony, Mayor Ray Nagin wept, gave $1 million in taxpayer money to the project, and delegated management to a city coroner intent on a monument that would double as a warning to be better prepared for the next hurricane.

"This is an example of the dead helping the living," said New Orleans Parish Coroner Frank Minyard. "The underprivileged African-American community suffered worst in this storm and we have to make sure for the next storm that it doesn't happen again. Hopefully, this memorial will be a reminder of that."

But nine months later, what could have been an inspiring focal point for New Orleans has dissolved into a project that is forgotten, frustrated, and delayed - much like the Katrina recovery itself. Some say a lack of follow-up by the mayor is the cause, but Minyard places the blame on his own overburdened office, and the fatigue of a scattered city that had its share of problems long before the levees failed.

Few expect the monument to be built by the target date of Aug. 29, Katrina's third anniversary.

"Maybe by the fourth anniversary, maybe the fifth," said Gwendolyn Davis Brown, 53, the niece of the Rev. Lonnie Garrison, a longtime pastor at Pilgrim Progress Missionary Baptist Church in New Orleans who died in the aftermath of the storm. "There's so much stuff going on in the city, people still have to get back into their homes," added Patsy Dupart, 58, Garrison's daughter.

Some families are so overwhelmed by the storm, or were so troubled before it, that they have declined to pick up the bodies of relatives. The corner's office says 54 of the 85 unclaimed have been positively identified. But family members have either been lost in the massive relocation Katrina triggered, or decided to leave burial to the coroner because they were estranged from the deceased when the storm hit.

"Some families have chosen not to claim the bodies; some we cannot find families for. . . . It's just sad," said Julia Powers, a forensic anthropologist on loan from the Federal Emergency Management Agency to help Minyard.

New Orleans has seen an estimated 67 percent of its population return since the 2005 disaster that submerged 80 percent of town. But government statistics indicate that many are not original inhabitants, with up to 200,000 pre-Katrina residents forwarding their mail to other parts of the country a year after the storm.

With the dislocation, there is no organized group of surviving family members to push for a memorial, as was seen after the 2001 World Trade Center attacks. Residents and activists have focused on the challenges of the living.

"It hasn't been the top priority on my list of outrage, just because there are so many other things on that list," said Tracie Washington, a local attorney who advocates for affordable housing, healthcare, and other needs in the city. "You kind of presume it's going to get done. You just never think in advance who is going to get it done."

Minyard's office shouldered the memorial project after organizing some 900 Katrina-related autopsies, and helping investigate 3,000 missing person's reports. The city coroner has now become a repository for one of the worst per capita murder rates in the country, with 209 killed in 2007 and 95 killed so far this year.

Coroner psychologist Dr. Jeffrey Rouse, whose duty is to help families cope with death, designed a Katrina tribute that will be shaped like a satellite image of the hurricane.

A canopy of trees will lead visitors to the structure, where they can follow circular patterns of plaque-filled walls bearing the names of the deceased. On either side, mausoleums for the unclaimed will stand, the bodies able to be moved if family members claim them. In the eye of the storm will be a bronze statue of two angels rescuing a fleur-de-lis, the city symbol.

It will sit on a piece of land donated by Louisiana State University known as the Charity Hospital Cemetery. The grounds there contain the unmarked graves of centuries of the city's poorest. If remains are discovered during topsoil removal, work will be stopped while an onsite archaeologist documents.