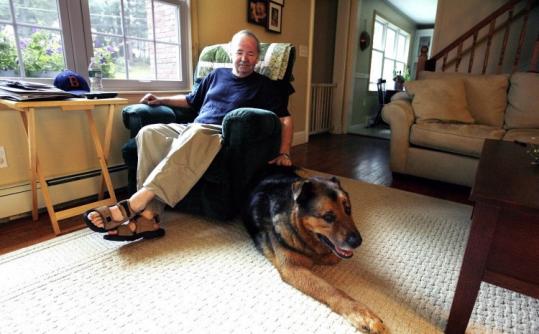 NEW YORK - It took only an instant for 58-year-old Gailanne Reeh to go from the picture of health to death's door. By chance, her doctor noticed a lump under her arm during a routine exam. It turned out to be advanced breast cancer.

Soon she was having tests to reveal the extent of the cancer and hearing the grim results.

The surgeon, she recalled, "looked at me and said, 'This is not a conversation I like to have. But I can't do anything for you. You can't be cured. You can't be treated. All we can do is manage your cancer.' " On scans to detect tumors, the doctor told Reeh, "you light up like a Christmas tree."

And so, like many others in that situation, Reeh, the vivacious owner of a staffing agency in Boston, was given bevacizumab, also known as Avastin, a drug that signifies both the hopes and dilemmas of modern medicine.

Looked at one way, Avastin, made by , is a wonder drug. Approved for patients with advanced lung, colon, or breast cancer, it cuts off tumors' blood supply, an idea that has tantalized science for decades. And despite its price, which can reach $100,000 a year, Avastin has become one of the most popular cancer drugs in the world, with sales last year of about $3.5 billion, $2.3 billion of that in the United States.

But there is another side to Avastin. Studies show that the drug prolongs life by only a few months, if that. And some newer studies suggest that it might be less effective against cancer than the Food and Drug Administration had understood when the federal agency approved its uses.

While many patients and their doctors say the drug can improve the quality of life - like a sense of well-being and an ability to carry out daily tasks without exhaustion or pain - such effects can be hard to document. Many patients with cancers other than those of the colon, lung, or breast are taking the drug, even in cases where there is no compelling evidence that it can help.

Avastin also has serious, if infrequent, side effects, some of which can be lethal. And because it is almost always used with standard chemotherapy - it did not work as well when researchers tried it alone - patients on Avastin do not escape chemotherapy's side effects.

"I still use Avastin routinely, but it's sobering," Dr. Leonard Saltz, a colon cancer specialist at Memorial Sloan-Kettering Cancer Center in New York, said of the new data. "It's not a slam-dunk and, in fact, the incremental benefit may be more modest than we want to admit."

If Avastin were inexpensive or if it cured cancer or even held it at bay, as the drug Gleevec does for blood cancer, few might care. But like a half-dozen or so new biotechnology drugs with a similar combination - alluring promise, high price, and only arguable benefits - Avastin raises troubling questions.

What does it mean to say an expensive drug works? Is slowing the growth of tumors enough if life is not significantly prolonged or improved? How much evidence must there be before billions of dollars are spent on a drug? Who decides? When, if ever, should cost come into the equation?

For a patient like Reeh, fighting for her life, the cost is not the main concern.

If her insurer did not pay, she said, she would go into debt, find a way to raise the money.

But some in the pharmaceutical industry worry that such prices will raise concerns about whether the drugs are worth it, leading to a backlash like price controls or restrictions on use.

Roy Vagelos, a former chief executive of who is considered an elder statesman of the industry, said in a recent speech that he was troubled by a drug, which he would not name but which was a clear reference to Avastin, that costs $50,000 a year and adds four months of life.

"There is a shocking disparity between value and price," he said, "and it's not sustainable."

Some patient advocates are also troubled by very expensive treatments like Avastin coming into routine use on what they see as little more than a hope and an expensive prayer.

"It's absolutely critical that we start having a public discussion," said Barbara Brenner, executive director of Breast Cancer Action, an advocacy group. "I think of Avastin as a model that is showing us where the problem is."

The problem is largely one of cost.

Cancer drugs constitute the second-biggest category of drugs in the United States behind cholesterol-lowering medicines, and accounted for $17.8 billion of total prescription drug sales of $286.5 billion in 2007, according to , a healthcare information company. Spending on drugs for cancer grew 14 percent last year, faster than for all but three other diseases.

About 100,000 Americans take Avastin, according to Genentech's data.

The drug is being formally tested in as many as 450 clinical trials for about 30 types of cancer. And Genentech, its partner, Roche, and the National Cancer Institute are starting studies that will include more than 26,000 people with lung, colon, or breast cancer at earlier stages of the disease than were studied initially.

If Avastin is approved for those earlier-stage patient groups, it could have a major impact in delaying the return of their cancer, but hundreds of thousands of additional people could end up taking it, possibly for years.

That, insurers and patient advocates say, could impose a considerable financial burden.

Avastin's cost to patients and insurers can be much higher, though, because doctors and hospitals buy the drug and then sell it to patients or their insurers, often marking up the price. So the $2.3 billion that Genentech recorded in sales of Avastin represents only part of what Americans spent on the drug last year.

Private insurers sometimes pay several times as much as Medicare pays for Avastin. Like Medicare, private insurers may in turn require patients to pay a percentage of what can be hefty bills.

That has happened to Jim Lemieux, a colon cancer patient at Dana-Farber Cancer Institute in Boston. His insurance requires that he pay 25 percent of the cost of his treatment, which includes Avastin. His insurer, he said, is charged $6,000 a month for the drug, making his share $1,500.