He addresses new citizens as US marks 4th 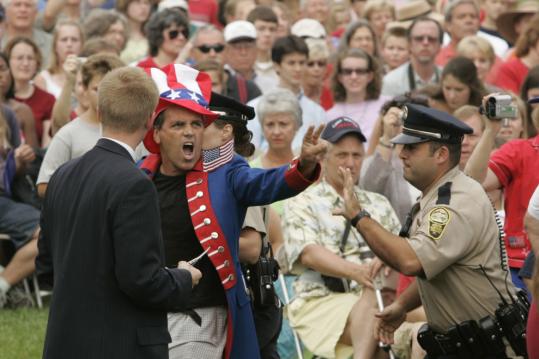 CHARLOTTESVILLE, Va. - People lined up to be sworn in as new US citizens were unwitting witnesses yesterday to a constitutional object lesson at President Bush's expense on the grounds of Thomas Jefferson's Monticello.

Protesters interrupted Bush's brief welcoming speech several times with calls for his impeachment, and the president calmly responded at one point: "To my fellow citizens-to-be, we believe in free speech in the United States of America."

Americans across the country mixed patriotism and plain-old good fun to mark Independence Day, with solemn ceremony alternating with parades and fireworks.

On the 232d anniversary of the adoption of the Declaration of Independence, Boy Scouts in Hartford rang a replica of the Liberty Bell, while organizers of the annual New York fireworks display promised the rockets' red glare would be better than ever.

Near Kissimmee, Fla., a wounded bald eagle, the national bird, was flying free after spending more than two months rehabilitating from a fight with another eagle. It was freed Thursday in Lake Tohopekaliga, the heart of Florida's eagle country.

On his final Fourth of July as president, Bush said he was honored to be present for the naturalization ceremony, saying, "I'll be proud to call you a fellow American."

The last six Fourth of July holidays have taken place amid continuing violence in Iraq. Bush's addition of 28,000 US troops last year in Iraq helped foster a measure of stability, however.

Some 150 or so demonstrators, from a variety of groups opposing Bush's policies on the war in Iraq, also rallied along the path of the president's motorcade to Monticello. Bush mentioned neither the war in Iraq nor the battle against terrorism in his speech, other than to say that "we pay tribute to the brave men and women who wear the uniform."

For the people assembled with him at the naturalization ceremony, he said, "When you raise your hands and take your oath, you will complete an incredible journey . . . From this day forward, the history of the United States will be part of your heritage."

The ceremony in Hartford was among several similar events being held across the country yesterday by a group known as Descendants of the Signers of the Declaration of Independence.

Thirteen peals, one for each of the original colonies, rang out from a replica Liberty Bell at the state Capitol.

Some locales, including Mount Rushmore in South Dakota, started the holiday weekend early, with fireworks displays on Thursday night.

In Monticello, Ill., authorities said nine people were treated for ringing in the ears or other minor injuries Thursday after two stray shells from a fireworks display landed in a crowd.

Country music star Wynonna Judd was to perform at Fort Bragg, and the Marines were hosting her contemporary, Lee Ann Womack, at Camp Lejeune.

The severity of a nearby wildfire prompted the cancellation of a fireworks display in Santa Barbara County, Calif. Communities across the parched state called off similar events because of fears they could start fires.