A courtly but polarizing force 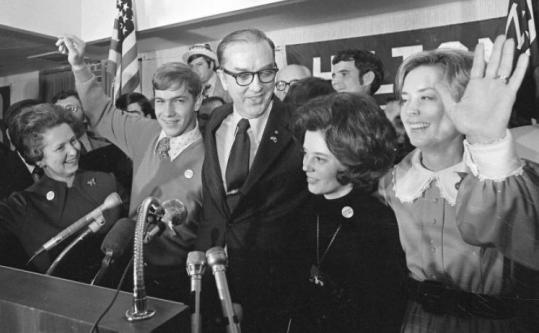 Jesse Helms, the North Carolina Republican whose unyielding conservatism and obstructionist tactics won him the nickname "Senator No" during his five terms on Capitol Hill, died in Raleigh, N.C., on the Fourth of July. He was 86.

He died of natural causes, said his former chief of staff, Jimmy Broughton.

"Today we lost a senator whose stature in Congress had few equals," said Mitch McConnell of Kentucky, the Senate Republican leader, who lavished praise on the former senator as he defended Mr. Helms against those who remember him as a resolute polarizer on racial and other rights issues. "Senator Helms certainly was no bigot," McConnell said. "He was a man however not into subtlety. You know what he thought about a particular issue. You certainly knew because he was not into the kind of nuance and subtlety that so often divides American politicians."

"At the height of his power," the Rev. Jesse Jackson said yesterday, "he fought for the values of the old confederacy. He resisted the new South. He resisted the opportunity to fight for a more perfect union."

In appearance and manner, Mr. Helms little resembled the classic demagogue from Dixie. Balding and bespectacled, he spoke in a mild, mumbly voice; and even opponents lauded his courtliness. When Mr. Helms announced he would not seek reelection in 2002, Senator Joseph Biden, Democrat of Delaware, called him "one of the most thoughtful, considerate, and gracious senators I have ever served with."

Yet in his eagerness to take extreme positions and exploit hot-button issues, Mr. Helms embraced the substance if not the style of such Southern firebrands as Theodore Bilbo of Mississippi or "Pitchfork" Ben Tillman of South Carolina.

In 1997, Mr. Helms scuttled the nomination of a moderate Republican, Governor William F. Weld of Massachusetts, as ambassador to Mexico. "I'm not calling Weld a skunk, but if you can get into a certain kind of contest you get your shoes wet," said Mr. Helms, who cited Weld's support of the medicinal use of marijuana to account for his opposition. Others noted that Weld had attacked Mr. Helms when running for the Senate in 1996.

The Wall Street Journal reported that Mr. Helms referred to African-Americans by the catch-all term "Fred", asking for example, "What does that Fred want?" or "What did this Fred say?" Filibustering against making the Rev. Martin Luther King Jr.'s birthday a national holiday, Mr. Helms called him a practitioner of "action-oriented Marxism" whose principles were "not compatible with the concepts of this country."

During Mr. Helms's 1990 reelection campaign, a television ad showed a pair of hands crumpling a piece of paper. "You needed that job," the voiceover said. "And you were the best qualified. But they had to give it to a minority because of a racial quota. Is that really fair? Harvey Gantt says it is." The hands were white. Gantt, Mr. Helms's opponent, was black.

The senator's divisiveness was not restricted to race. According to Mr. Helms, gays who suffered from AIDS did so as the result of "deliberate, disgusting, revolting conduct." In 1994, he declared that Bill Clinton "better watch out if he comes down here [to North Carolina]. He'd better have a bodyguard." The year before he'd explained his opposition to a Clinton nominee was based on politics as well as sexual orientation. "She's not your garden-variety lesbian," he said. "She's a militant-activist-mean lesbian."

Mr. Helms's impact was no less striking than his rhetoric. His fund-raising organization, the National Congressional Club (later National Conservative Club), was at one time the nation's second-largest political action committee. Its financial largesse helped make Mr. Helms a key figure in the rise of the New Right in the late '70s and early '80s. His popularity among old-line North Carolina Democrats, dubbed "Jessecrats," also made him a key figure in the Republican Party's increasing hold on the formerly one-party South.

Time magazine dubbed him "de facto foreign minister" because of his aggressive chairmanship of the Senate Foreign Relations Committee from 1995-2001. It is a measure of Mr. Helms's influence that he was the only legislator, from any nation, ever to address the United Nations Security Council. Sharing a podium with him, Secretary of State Madeleine K. Albright was once asked what had been her toughest negotiating session as UN ambassador. "With Jesse Helms," she said, to the senator's visible delight.

Mr. Helms blocked all ambassadorial nominations for three months in 1995, two years before he blocked the Weld nomination. Mr. Helms met with less success in 1985 when he urged a conservative takeover of CBS in response to what he charged was the network's political bias.

There was a certain aptness in Mr. Helms's leading such a campaign. He owed his political career to broadcasting. He helped manage a Raleigh, N.C., radio station in the late '40s. "It occurred to me that radio had a lot of potential as a local news medium," he later recalled. The high profile Mr. Helms gained helped him win his Senate seat in 1972.

Mr. Helms's polarizing tendencies were much apparent in his broadcasts (he liked to refer to the civil rights movement as "the civil rights uproar"). In elective office, those tendencies inspired criticism from both sides of the political spectrum. Barry Goldwater, Republican of Arizona, and the founding father of the New Right, alleged that Mr. Helms "has not helped the conservative cause one bit." His ideological opposite, Senator Alan Cranston, Democrat of California, said in the early '80s, "Since Jesse Helms started his warfare against those who disagree with him, there's a meanness in the Senate now that I don't think has been seen since the days of Joe McCarthy."

Such attacks left Mr. Helms unfazed. As he said upon winning reelection in 1978, "I'm Senator No, and I'm glad to be here!"

Jesse Alexander Helms Jr. was born Oct. 18, 1921, in Monroe, N.C. His father worked for the fire and police departments there, eventually becoming chief of both. His mother, Ethel Mae Helms, was a housewife.

A prize-winning tuba player in high school, Mr. Helms attended Wingate Junior College and Wake Forest College, both in North Carolina, before enlisting in the Navy in 1942. That year he married Dorothy (Coble) Helms. A hearing problem ruled out overseas duty for Mr. Helms, who served as a recruiter.

Mr. Helms worked for Willis Smith in his 1950 challenge to liberal incumbent US Senator Frank Graham in the Democratic primary. (Mr. Helms did not change his registration to Republican until 1970.) A famously bitter campaign, it was notable for race- and red-baiting on Smith's part. He eked out a victory, and Mr. Helms joined his Washington staff.

After Smith's death, in 1953, Mr. Helms briefly worked for his successor, Alton Lennox, then became executive director of the North Carolina Bankers Association. He was elected to the Raleigh City Council in 1957, serving until 1961.

That was Mr. Helms's sole elective office before the Senate. With the slogan "Elect Jesse Helms He's One of Us," he defeated a Democratic congressman, Nick Galifianakis, in 1972 to become the first Republican senator from North Carolina in the 20th century. Mr. Helms had the good fortune to have run in a year that saw a landslide GOP presidential victory. (He had the same luck a dozen years later when he faced his toughest reelection fight, against incumbent Governor James Hunt, in the same year Ronald Reagan was overwhelmingly returned to the White House.)

Mr. Helms quickly gained a reputation as perhaps the most conservative member of the Senate, a status that earned him 99 votes for vice president at the 1976 Republican National Convention. Still, his enmity toward government spending and social programs did not extend to tobacco price supports, which he stoutly defended as a member of the Senate Agriculture Committee (he was chairman from 1985-87). Well aware that North Carolina produces more tobacco than any other state, he also put up a sign in his office, "Thank you for smoking."

Some detected a mellowing in Mr. Helms during his final years in the Senate. "We must not ignore this, in the name of the Lord and humanity," he said in 2000 of poverty and AIDS in Africa, pledging his support for increased US aid. "Those are human beings over there."

Mr. Helms, who during the '70s had sought to end US sanctions against the white-minority government of Rhodesia, credited his changed views on Africa to the influence of Bono, of the rock group U2. The singer, a longtime Third World advocate, had sought out Mr. Helms and cultivated him, even inviting him and his grandchildren to a U2 performance.

"They had that crowd going wild," a bemused Mr. Helms said afterward, calling the concert "the noisiest thing I ever heard." Mr. Helms published his memoirs, "Here's Where I Stand," in 2005.

In addition to his wife, he leaves two daughters, Jane Knox and Nancy Stuart; a son, Charles; and four grandchildren, all of North Carolina.