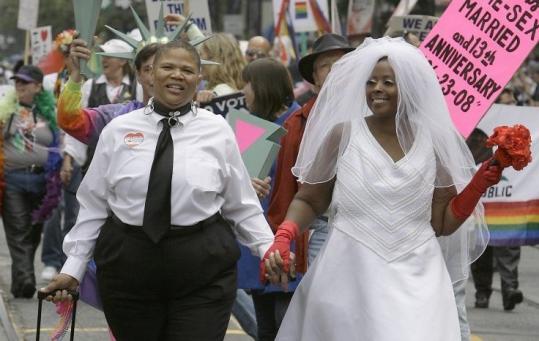 SACRAMENTO - Backers of Proposition 8, a November ballot initiative that would amend California's constitution to ban same-sex marriage, had, as of last week, raised nearly $2.3 million while foes had raised about $1.3 million.

Fund-raising for the campaigns is only now beginning in earnest, and consultants predict that by the time voters go to the polls, each side will have raised as much as $15 million.

"In many people's minds, it is the civil rights issue of the day, if not the decade," said Steve Smith, the main consultant seeking to kill the initiative and keep same-sex marriage legal in California. "People are very focused on it across the country."

Human Rights Campaign, which advocates for gay rights from its base in Washington, D.C., has contributed $242,600 to defeat the initiative so far.

The California arm of the National Organization for Marriage, based in New Jersey, has bundled $1.1 million from 80 individual donors to promote the November initiative.

Although the measure affects only Californians, the battle will extend far beyond the state's borders. Both sides intend to use the Internet to raise money, and are already receiving donations from across the country.

The measure is attracting outside interest in part because of its national implications. Out-of-state couples are going to California to marry, and could then sue their home states for not recognizing California marriages.

In San Francisco yesterday, tens of thousands of revelers in the city's 38th annual gay pride parade celebrated the newfound freedom of same-sex couples to marry.

Mayor Gavin Newsom received ovations along the parade route for his role in working to overturn the state's ban.

In an interview on NBC's "Meet the Press" yesterday, Governor Arnold Schwarzenegger called the effort to ban same-sex marriage "a waste of time."

He said he believes marriage should be between a man and a woman but does not think that view should be forced on anyone else.