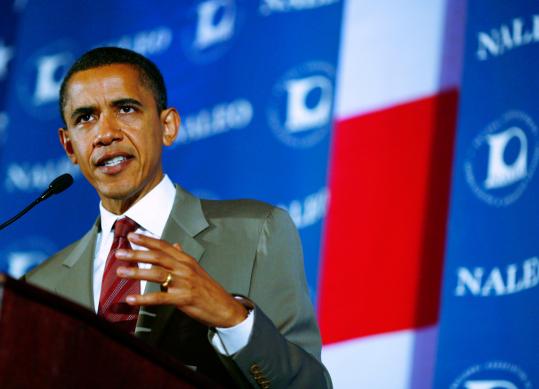 "I come from a border state, my dear friends. I know these issues," McCain told Hispanic elected officials. The Republican senator from Arizona said overhauling the country's broken immigration system, not just securing its borders, "will be my top priority."

Appearing later before the same audience, Obama accused McCain of walking away from comprehensive immigration reform. The Democratic senator from Illinois said: "We must assert our values and reconcile our principles as a nation of immigrants and a nation of laws. That is a priority I will pursue from my very first day."

The two spoke separately to some 700 Hispanics attending the National Association of Latino Elected and Appointed Officials conference. It's the first of three such appearances each is scheduled to make to Hispanic organizations in less than a month, underscoring the importance of the nation's fastest-growing minority group.

Both McCain and Obama were warmly received at the conference; the crowd gave each standing ovations and cheered loudly. When McCain spoke, the audience shouted down antiwar protesters who interrupted the Republican's speech four times. The audience chanted Obama's name when the Democrat entered later. As he took the stage, Obama said "Si, se puede!" - his "Yes, we can" campaign slogan in Spanish - and the crowed echoed him.

But Hispanics were the primary focus as each makes an aggressive play for this up-for-grabs group that's likely to carry important weight in battleground states of Nevada, Colorado, New Mexico, and others with large numbers of Spanish-speaking voters.

Group expresses solidarity with adopted middle name
NEW YORK - Emily Nordling has never met a Muslim, at least not to her knowledge. But this spring, Nordling, 19, a student from Fort Thomas, Ky., gave herself a new middle name on Facebook.com, mimicking her boyfriend and shocking her father.

With her decision, she joined a growing band of supporters of Senator Barack Obama, the presumptive Democratic presidential nominee, who are expressing solidarity with him by informally adopting his middle name.

The result is a group of unlikely sounding Husseins: Jewish and Catholic, Hispanic and Asian and Italian-American, from Jaime Hussein Alvarez of Washington, D.C., to Kelly Hussein Crowley of Norman, Okla., to Sarah Beth Hussein Frumkin of Chicago.

Jeff Strabone of Brooklyn now signs credit card receipts with his newly assumed middle name, while Dan O'Maley of Washington, D.C., jiggered his e-mail account so his name would appear as "D. Hussein O'Maley." Alex Enderle made the switch online along with several other Obama volunteers from Columbus, Ohio, and now friends greet him that way in person, too.

Obama is a Christian, not a Muslim. Hussein is a family name inherited from a Kenyan father he barely knew, who was born a Muslim and died an atheist. But the name has become a political liability. Some critics on cable television talk shows dwell on it, while others, on blogs or in e-mail messages, use it to falsely assert that Obama is a Muslim or, more fantastically, a terrorist.

Candidate Obama to visit Europe, Middle East
WASHINGTON - Senator Barack Obama will make his first international trip as a presidential candidate this summer, his campaign announced yesterday, traveling to the Middle East and Europe in an effort to bolster his foreign policy experience in his fall campaign against Senator John McCain.

On a separate trip, he also is planning to tour Iraq and Afghanistan, although aides declined to disclose details or the dates of his travel for security reasons.

While the economy is a resounding issue in the presidential campaign, several major distinctions between Obama and McCain revolve around their foreign policy, particularly the United States' military strategy in Iraq. McCain has criticized Obama for not visiting Iraq in more than two years, saying he has not seen the progress achieved in the country.

In the middle of a presidential campaign, candidates often have shied away from taking foreign trips, investing their time instead in battleground states. But this week, McCain heads to Colombia and Mexico, after a European tour in March and a trip to Canada this month.

The trip was announced as Obama made a private visit to wounded US troops at Walter Reed Army Medical Center. It will be Obama's fourth international trip since his election to the Senate four years ago. He has visited Russia, the Middle East, and several countries in Africa.

Last month, Obama declined an invitation from McCain to make a joint visit to Iraq, saying, "I just don't want to be involved in a political stunt." McCain has visited Iraq eight times.

In a meeting yesterday with President Jalal Talabani of Iraq, McCain said the United States was making significant progress in the country since US troop strength was bolstered. As he has criticized Obama's proposal to remove combat troops from Iraq at a pace of one to two brigades a month, McCain has urged Obama to visit Iraq and meet with US military commanders.

The Republican National Committee has placed a clock on its website, counting down the time that has passed since Obama last visited Iraq - January 2006, as part of a congressional delegation to the Middle East.