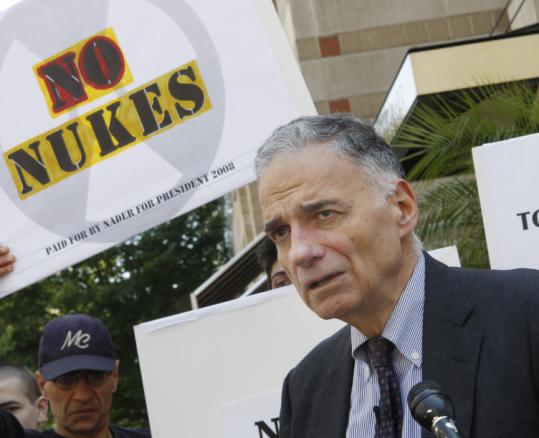 But remarks published yesterday, which tossed race into the critique, are drawing fire.

Nader - the longtime consumer advocate who has been a bane to Democrats - told the Rocky Mountain News that Obama is trying to "talk white" and to appeal to "white guilt."

"There's only one thing different about Barack Obama when it comes to being a Democratic presidential candidate. He's half African-American," Nader said in what the Denver newspaper described as a wide-ranging interview. "Whether that will make any difference, I don't know. I haven't heard him have a strong crackdown on economic exploitation in the ghettos. Payday loans, predatory lending, asbestos, lead. What's keeping him from doing that? Is it because he wants to talk white?"

Nader added: "I mean, first of all, the number one thing that a black American politician aspiring to the presidency should be [doing] is to candidly describe the plight of the poor, especially in the inner cities and the rural areas. . . . Haven't heard a thing.

"He wants to show that he is not . . . another politically threatening African-American politician," Nader said. "He wants to appeal to white guilt. You appeal to white guilt not by coming on as, 'black is beautiful, black is powerful.' Basically he's coming on as someone who is not going to threaten the white power structure, whether it's corporate or whether it's simply oligarchic. And they love it. Whites just eat it up."

Obama, whose mother was from Kansas and whose father was from Kenya, has been navigating through his biracial heritage his entire life, going to a predominantly white college and Harvard Law School, then getting deeply involved in Chicago's black community. In March, he gave a widely-praised speech on race and politics in which he faulted whites and blacks alike for letting racial animosity and distrust linger.

Asked at a news conference in Chicago yesterday about Nader's comments, Obama said he has been addressing the issues that Nader raised.

"Ralph Nader's trying to get attention," Obama added. "He's become a perennial political candidate. It's a shame, because if you look at his legacy in terms of consumer protections, it's an extraordinary one."

Chris Driscoll, a spokesman for Nader, said that Nader would not retract his remarks.

"Obama's abstract campaign has been illusional and irresponsible when it comes to avoiding concrete policies that truly defend and empower the 100 million Americans living in poverty or near poverty," Nader responded in a statement read by Driscoll.

In a Los Angeles Times/Bloomberg poll released this week, Nader had 4 percent in a four-man race, just ahead of Libertarian Bob Barr, but far behind Obama and Republican John McCain. Nader received nearly 3 percent of the vote as the Green Party candidate in 2000, the race in which many Democrats blame him for Al Gore's narrow loss. Nader didn't reach 0.5 percent in 2004, when he also ran as an Independent.