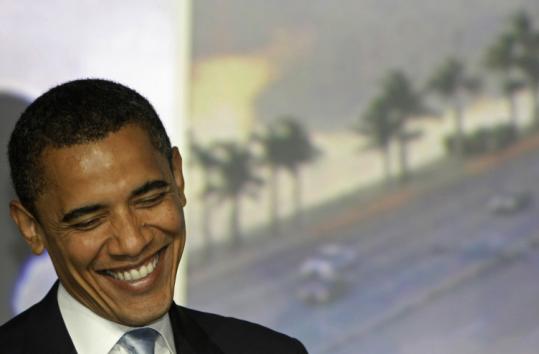 McCain's campaign said Obama was engaging in typical political attacks that the Democrat rejects in his speeches and is confusing the facts.

Both candidates have visited the flood zones in the past two weeks, since tornadoes hit and heavy rains sent rivers surging over their banks. At least 24 people were killed, the majority in Iowa.

Obama, an Illinois senator, canceled a visit to eastern Iowa last week at the request of state officials and instead went to fill sandbags in Quincy, Ill. McCain, an Arizona senator, toured flood damage in Iowa on Thursday.

"I know that Senator McCain felt as strongly as I did," Obama said, "feeling enormous sympathy for the victims of the recent flooding.

"I'm sure they appreciated the sentiment, but they probably would have appreciated it even more if Senator McCain hadn't opposed legislation to fund levees and flood control programs, which he considers pork."

Obama tells US mayors that new urban policy is needed
MIAMI - Barack Obama told the nation's mayors yesterday that current urban policy is obsolete and needs to be replaced by a model that focuses on rational metropolitan growth rather than chiefly on inner-city crime and poverty.

Drawing on his years as a community organizer on Chicago's South Side, Obama told the US Conference of Mayors that while he intended to be a supportive partner if he wins the White House, the mayors should not count on significant additional help from Washington.

He also said Washington's ability to help the cities would be limited in part by a long-term federal budget deficit left by the Bush administration, which he called the most fiscally irresponsible administration in modern times.

Survey shows race, age may affect election views
As Barack Obama opens his campaign as the first African-American on a major party presidential ticket, nearly half of all Americans say race relations in the country are in bad shape and 3 in 10 acknowledge feelings of racial prejudice, according to a new -ABC News poll.

Overall, 51 percent call the current state of race relations "good" or "excellent." At the same time, nearly 9 in 10 whites said they would be comfortable with a black president.

Just over half of whites in the new poll called Obama a "risky" choice for the White House, while two-thirds said John McCain is a "safe" pick. Forty-three percent of whites said Obama has sufficient experience to serve effectively.