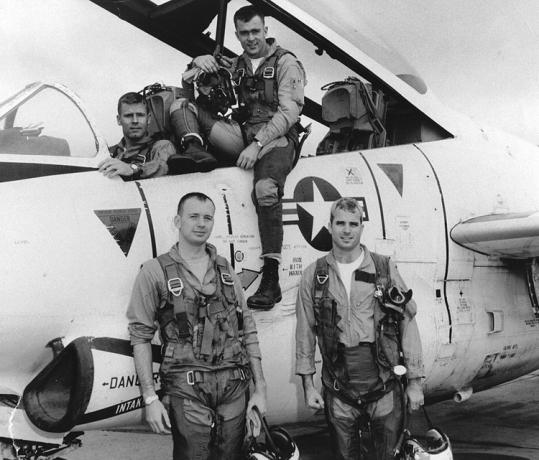 John McCain (bottom right) is seen with his squadron in 1965 in this undated photo. His 1974 essay addressed why some of his colleagues collaborated with the North Vietnamese. (Library of Congress via The New York Times)
Email|Print|Single Page| Text size – + By David D. Kirkpatrick New York Times News Service / June 15, 2008

NEW YORK - About a year after his release from a North Vietnamese prison camp, Commander John S. McCain III sat down to address one of the most vexing questions confronting his fellow prisoners: Why did some choose to collaborate with the North Vietnamese?

"The biggest factor in a man's ability to perform credibly as a prisoner of war is a strong belief in the correctness of his nation's foreign policy," McCain wrote in a 1974 essay submitted to the National War College and never released to the public. Prisoners who questioned "the legality of the war" were "extremely easy marks for communist propaganda," he wrote.

Americans captured after 1968 had proven to be more susceptible to North Vietnamese pressure, he argued, because they "had been exposed to the divisive forces which had come into focus as a result of the antiwar movement in the United States." To insulate against such doubts, McCain recommended that the military should teach its recruits not only how to fight but also the reasons for American foreign policies like the containment of Southeast Asian communism - even though, McCain acknowledged, "a program of this nature could be construed as 'brainwashing' or 'thought control' and could come in for a great deal of criticism."

Now a senator who is the all-but-certain Republican presidential nominee, McCain often points to his nine months at the War College as the time that crystallized his views toward foreign conflicts like the war in Iraq. He has talked about his studies as a tutorial in the hows-and-whys of America's involvement in Southeast Asia. But the 40-page final paper he produced was limited to an evaluation of the military code of conduct through the prism of his "narrow, but personal, viewpoint."

It was in many ways a first draft of his political autobiography, recounting the ennobling stories of resistance that he and his coauthor, Mark Salter, would later retell in his 1999 memoir, "Faith of My Fathers." McCain's 1974 thesis, though, also revealed a welter of other emotions about his years as a prisoner of war, including a deep anger at those he considered collaborators, a tough-minded disdain for public hand-wringing about captives like himself, and a sharp impatience with the American government for failing to "explain to its people, young and old, some basic facts of its foreign policy."

McCain's paper - obtained through the Freedom of Information Act and provided to the Times by Matt Welch, an author of a book about McCain - sheds new light on the experience that first brought him national attention and remains a staple of his campaign commercials. His conclusions hint at themes of his career, like his habit of making peace with former enemies. And his arguments that the government and the military should have done more to convince the voters and the troops about the case for the war in Vietnam echo in current debates about Iraq as well.

Asked if he still had those views, McCain said in an e-mail message that he still believed the antiwar movement had hurt the morale of some prisoners, although he added the vast majority "performed their duty with courage and resolve irrespective of how controversy about the war influenced their view of it."

Historians, though, say his assertion that the antiwar movement weakened the resistance of Americans captured late in the war is misleading, in part because almost all the most cooperative prisoners were captured early and in part because many other cultural shifts contributed to differences in the later war captives. And some of his fellow prisoners also question the connection between the war protests and the camp collaborators.

"Don't connect those guys with the antiwar movement," said Orson Swindle, a prisoner who became a friend of McCain. "It was the guy in the next cell who was the reason we were trying so hard to uphold the code and our honor, and those guys just betrayed everything we stood for."

But others say it is easy to see how McCain's dismay at prisoners' propaganda statements could feed his current impatience with calls for a withdrawal from Iraq. In the crucible of the camps, it was easy to see the collaborators - broadcasting antiwar statements over prison loudspeakers, smiling for Jane Fonda and visiting peace activists, enjoying the rewards of better food and less torture - as embodiments of the war protesters that the North Vietnamese counted on to wear down the American war effort.

McCain, then a Navy lieutenant commander, was what the American prisoners called a "tough resister." He was nicknamed Crip for the severity of the injuries he sustained - a shoulder, both arms, and his knee broken, with a bayonet wound near the groin - when his fighter plane was shot down in October 1967.

Military rules only allowed POWs to go home in the order of their capture, but some senior officers said his medical condition justified accepting an offer of release from the North Vietnamese. McCain did not want to be part of North Vietnamese propaganda, so he chose to endure years of torture instead.