Paul, Barr may be forging an alliance for fall election 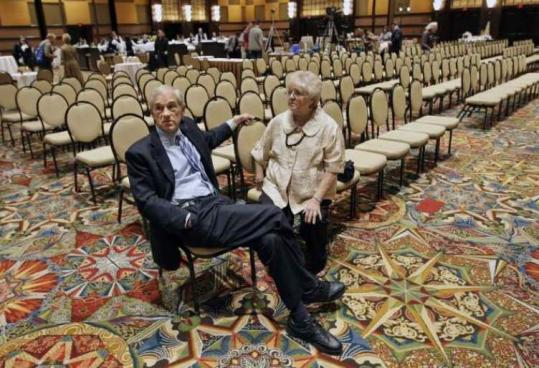 Signs are emerging of a possible alliance this fall between Ron Paul, the libertarian-minded rebel Republican, and Bob Barr, the Libertarian Party's presidential nominee.

Paul was the Libertarian nominee in 1988, and many of his supporters are libertarian-minded on economic and social issues. Just before formally ending his presidential bid Thursday night, the Texas congressman praised Barr, and in a statement yesterday, Barr reciprocated.

"Congressman Ron Paul has fought tirelessly in both the Libertarian Party and the Republican Party to minimize government power and maximize individual liberty," said Barr, a former six-term GOP congressman from Georgia. "I want to thank him for all that he has done for liberty in this nation, and encourage him to continue his fight through whatever avenues he sees fit."

The Libertarian Party plans to get Barr on the ballot in 48 states in November, and Barr could get a significant boost if a sizable number of the 1.1 million people who voted for Paul during the Republican primaries go his way. Some analysts say Barr could be a spoiler, taking votes away from presumptive Republican nominee John McCain in key swing states, including Colorado, Nevada, and his home state of Georgia.

"Ron Paul was a lightning rod for millions of Americans against the war in Iraq and for the protection of personal liberties that the two major parties have turned their back on - by continuing to support the illegal criminal war and the PATRIOT Act," the Nader campaign said in a statement. "There is a clear choice for those who want to support a candidate who will stand up against the war and stand up for personal liberties and privacy."

On Thursday night, Paul told supporters attending the Texas Republican Party convention in Houston that he was ending his campaign and starting the group Campaign for Liberty to help elect libertarian-leaning Republicans.

Paul hopes that at least 11,000 of his supporters fill a Minneapolis arena for a counter-convention on Sept. 2, timed to coincide with the Republican National Convention in neighboring St. Paul.