He calls decision 'one of the worst' in US history 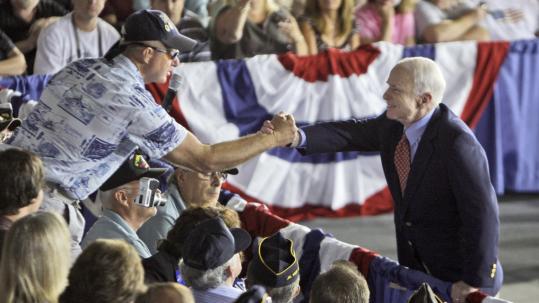 PEMBERTON, N.J. - Senator John McCain, transforming a recent Supreme Court decision into a campaign issue yesterday, blasted the court's ruling, which established that foreign terrorism suspects held in detention at the US military base at Guantanamo Bay have the constitutional right to challenge their detention in civilian courts.

"The United States Supreme Court yesterday rendered a decision which I think is one of the worst decisions in the history of this country," McCain, the presumptive Republican presidential nominee, said at a town hall meeting in this southern New Jersey town adjacent to McGuire Air Force Base.

His opponent, Senator Barack Obama of Illinois, had welcomed the decision, which the court reached on a 5-4 vote Thursday. In response, Obama used the ruling to tie McCain to President Bush, who created the detention center for captured "enemy combatants" and the military-based justice system to handle their cases.

Obama, the presumptive Democratic nominee, said in a statement that the ruling validating detainees' rights "ensures that we can protect our nation and bring terrorists to justice, while also protecting our core values." He said the deeply divided court, which has ruled on this issue before, saw through "the Bush administration's attempt to create a legal black hole at Guantanamo - yet another failed policy supported by John McCain."

Obama has long advocated ending the justice system specially created for Guantanamo Bay. He said the detainees should be brought to trial in US courts or in military courts-martial, a proposal the Supreme Court ruling does not affect.

The high court's decision, however, voided some of McCain's proposals for Guantanamo.

Like Obama, McCain said Guantanamo should be closed, but he wants to bring the specially created military justice system to US soil to try the inmates. He insisted that the inmates should not have access to civilian courts, regardless of where they are detained.

"We made it very clear these are enemy combatants," McCain said yesterday, defending his position. "They have not, and never have, been given the rights of citizens of this country."

Two of McCain's allies, Senators Lindsey Graham of South Carolina and Joe Lieberman of Connecticut, joined him at a news conference after the town hall meeting.

Graham, a close adviser to McCain on military and justice issues, said Thursday the Constitution might need to be amended to override the Supreme Court ruling. McCain did not rule out that option yesterday but said there are other avenues available, including drafting a new law to limit detainees' access to federal courts.

The three senators rejected Obama's attempts to link their positions on Guantanamo to Bush. They said their support for a 2006 law setting up the special military system on Guantanamo was an attempt to "find the right balance" between Bush's security-first policy and the rule of law.

McCain's harsh critique was far more forceful than his reaction on Thursday, suggesting he saw a political advantage in identifying with the conservative justices who were in the minority on the matter. Using the language of domestic politics, he and his two Senate colleagues condemned the high court's "unaccountable judges" - a frequent bugaboo of conservative voters - and their role in a national security matter.

Graham said the court effectively stripped legal decisions on enemy combatants from "military personnel tribunals trained in the matters of warfare." Now, he added, cases will be handled "by the most liberal judges the detainees can find in the most liberal jurisdictions with no standards" and at a high risk to national security.

McCain then read approvingly from the dissenting opinion written by Chief Justice John G. Roberts - whom McCain cites as a model for his appointees should he become president - and scolded Obama for siding with the court's liberal bloc.

"Senator Obama applauds this decision, and he supports it," McCain said. "I argue against it and will do what I can to at least narrow down some of the wide-open aspects of this Supreme Court decision."

That pledge alarmed some human rights activists, who fear McCain could try to re-create the Guantanamo-style system of justice on US soil. If that happens, they warn, noncitizens - including green card holders - could be held indefinitely if deemed threats to national security.

The Military Commissions Act of 2006, which McCain backed, effectively eliminated enemy combatants' rights even if they were held on US soil. The Supreme Court ruling nullified it, but McCain's vow to keep fighting for it has disturbed some human rights activists and legal specialists.

"It is contrary to our basic values," said Eugene Fidell, president of the National Institute of Military Justice, a nonpartisan group of military scholars.