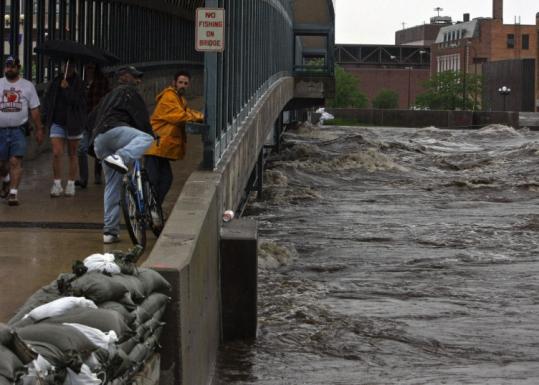 CEDAR FALLS, Iowa - Residents were ordered to evacuate low-lying sections of towns along the overflowing Cedar River yesterday, and communities along the Mississippi River were warned that new rainfall would boost their expected flood crests.

Officials in Wisconsin, where this month's rainfall is approaching a record, planned to drain water from one reservoir to ease pressure on a dam, and were monitoring dams elsewhere in the state. High water in Indiana burst a levee yesterday and flooded a vast stretch of farmland.

More rain spread across parts of Iowa, including some flood-threatened areas. The showers occurred as a band of storms rippled across the northern Plains.

A sandbagged levee prevented the Cedar River from flooding this northeastern Iowa city, but officials asked for extra volunteers to help shore it up. Just downstream along the Cedar River, the neighboring city of Waterloo ordered a mandatory evacuation of some neighborhoods because the ground was saturated and pumping stations couldn't keep up, officials said.

"This is not a recommendation, this is not an encouragement, this is a mandatory evacuation," Waterloo Mayor Tim Hurley said at a news conference. "We need you out of there."

Hurley said the order affected about 60 homes and half as many businesses. He said volunteers also were being pulled out of the area. National Guard soldiers had blocked off bridges in and out of downtown.

To the southeast in Cedar Rapids, more than 200 residents of a neighborhood near the river were told to seek higher ground.

"The water is at least 3 feet deep. It's still coming up," he said of the town, home to about 5,000 people between Cedar Falls and Cedar Rapids.

The Cedar River had been expected to top the Cedar Falls levee during the night and deluge the downtown area of the city of 35,000 people about 90 miles northeast of Des Moines. But city spokeswoman Susan Staudt said early yesterday that the sandbags had held. The river peaked in Cedar Falls at about 14 feet over flood stage early yesterday and had fallen nearly 2 feet by noon, authorities reported.

Thousands of volunteers who showed up Tuesday to help with the sandbagging effort "saved this city, but we are still at a critical point," Staudt said.

She said more volunteers were needed to help reinforce the sandbag wall, which rises several feet above the levee. Volunteers patrolling the sandbag wall during the night reinforced spots where water was seeping through, she said.