Once a rival, now a champion 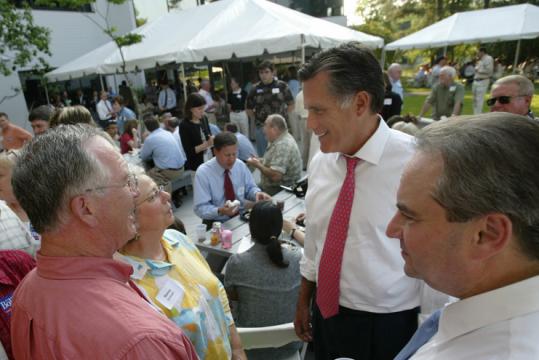 BROOMFIELD, Colo. - Gazing out over the darkened convention hall, Mitt Romney allowed the applause to wash over him. The deafening standing ovation from some 4,000 Republicans gathered for their annual convention was a reminder of how strong his presidential campaign had been in Colorado, where he beat John McCain by 40 points in the February caucus.

When it finally subsided, Romney set to the task at hand: entreating the crowd to work as hard as he is to elect McCain.

"This is kind of a new thing for me. You see, Senator McCain wasn't my first choice for president - I was," he said. "But he is my first choice now, I'll tell you that."

In what some see as a bold attempt to prod McCain into choosing him as his running mate, and what others consider plain good sportsmanship, Romney is back on the campaign trail, devoting himself full time to aiding his party and its nominee.

In an interview last week, Romney dismissed the idea that he was campaigning for vice president, saying he was merely trying to do everything he can to boost his party. It would have been "selfish" for him to "go home and sit by the pool all day," he said, when thousands of supporters had worked so hard on his campaign. He also said his new political action committee is not meant to be a short-lived mechanism for funding his travels, but rather a permanent organization devoted to promoting the conservative causes he believes in. He has no plans to return to the private sector; he is, he said, in public life to stay.

"Not necessarily in elected office or appointed office," he said, "but speaking out in favor of the policies I think are essential to keeping America strong."

But it would be hard to imagine that elected office is far from the mind of the 61-year-old Romney these days. Wherever he goes, reporters pound him with questions about the vice presidential slot. In Colorado, a handful of supporters waved "MITT FOR VEEP" signs they had ordered over the Internet. At a barbecue in Virginia the other day, one fan after the next said they wished McCain would pick him.

"I want you on that ticket," an elderly woman whispered as she shook his hand.

Romney's usual response to such comments is a study in genial neutrality. "Heh, heh, heh," he says. "Thank you."

On the trail, the postprimary Romney is characteristically vigorous and crisply attired. But the strain of the primary campaign has clearly ebbed, leaving him far more relaxed than the hyperkinetic candidate who zipped across the country on hardly any sleep. His mood seems relatively lighthearted for a man who just spent $44.6 million of his own money on losing a good shot at the presidency. At a Colorado press conference, confronting a microphone pole stuck with tape recorders and wires sprouting out every which way, he dropped a Seinfeld reference.

"It's a Festivus for the rest of us pole," he declared.

But when disappointed supporters surround him, clucking over his electoral misfortune, as they did after his Colorado speech, Romney can seem a bit crestfallen.

"You dropped out on my birthday," said a woman who ran El Paso county for his campaign.

"Your time will come," an older woman said, patting his hand kindly, as Romney smiled a bit sheepishly.

Whether Romney actually has a chance of being chosen by McCain is unclear. Romney was widely viewed as a potential pick after McCain invited him to his home in Arizona for a weekend last month, along with a guest list that included two other Republicans thought to be potential vice-presidential possibilities, governors Charlie Crist of Florida and Bobby Jindal of Louisiana. Romney said McCain has never mentioned the job to him and described the Arizona trip as a purely "social experience."

By way of illustration, he added that when he and his wife, Ann, arrived at McCain's rustic retreat, the senator whisked them down to the creek that runs by the property, Audubon guide in hand.

"He pointed out that there are 57 varieties of bird in that general area, and he'd just identified a new one," Romney said.

Many Republicans believe that Romney could bring significant strengths to the ticket - his financial expertise, his executive experience, and his relative youth, not to mention his prodigious fund-raiser ability.

But during the primary, he and McCain clashed bitterly. Romney repeatedly criticized McCain as a Washington insider with precious little executive experience, and he mocked McCain's admission that the economy was "not my strong suit."

"I think at this time, we need a president for whom the economy is a strong suit," Romney told a raucous crowd at a February rally near Denver, just a short drive from the convention center where he lavished praise on McCain this month.

McCain, meanwhile, could barely disguise his distaste for Romney. He infuriated the former Massachusetts governor by misrepresenting his position on Iraq, at one point likened him to a pig, and, in one memorable twofer, mocked Romney's exaggeration of his hunting experience and his landscaping company's use of illegal immigrant labor: Romney, McCain had said, should "get out his small-varmint gun and drive those Guatemalans off his lawn."

But Charley Manning, a longtime adviser to Romney, dismissed the significance of the old animosity.

"I think John McCain's long been known as a person who has a very strong temper, and that sometimes gets the best of him," he said. "I think we saw that in some of the debates and some of his attacks on Mitt Romney, but I don't think Mitt ever took it personally."

Manning said he could not speak for McCain, but Romney is quick to forgive. After a blistering US Senate race with Edward M. Kennedy in 1994, Manning noted, the two joined forces in hosting a fund-raiser for City Year, a Boston-based national service corps, and Kennedy went to Belmont to tour a new Mormon temple that Romney had helped build.

"From Mitt's point of view, it wouldn't be a problem," Manning said.

Many of Romney's supporters point to the acrimony in the 1980 primary between George H.W. Bush and Ronald Reagan, who managed to put their differences aside and win the White House. But that was long before YouTube and 24-hour cable news could turn old spats between former rivals into endless fodder for undercutting a unified front.

Certainly, though, Romney appears to be doing everything he can to audition for the part. He has already helped raise millions for the ticket - a pair of fund-raiser in Utah with President Bush, including a $70,000-a-head dinner at Romney's Deer Valley home, netted north of $2 million. He is stumping for McCain at state party conventions in Oregon and Texas this month, and he appears as a McCain surrogate on the morning news shows. In his speeches, he has begun to adopt the hatchet-man mantle of a running mate, dismissing the likely Democratic nominee Barack Obama as "charming and well spoken," even "handsome," but far too inexperienced to be president.

"He's reminding people of how effective a campaign spokesman he would be," said Dick Wadhams, chairman of the Colorado Republican Party. "And no doubt about it, he'd be great."

But Romney has not limited his political activities to those the McCain campaign has requested, nor is he merely headlining fund-raisers for Republican candidates in tight races. The other day, Romney not only spoke at a large luncheon fund-raiser for Bill Bolling, Virginia's lieutenant governor and a leader of Romney's campaign in his state, but after it was over, he drove two hours south to a second Bolling fund-raiser outside Richmond. He stayed for another two hours, shaking hands, taking hundreds of pictures, and giving a rousing stump speech in 90-degree heat.

Bolling is not even running for reelection this year.

Mike Grappone, a 42-year-old executive for a semiconductor company who attended the "Burgers with Bill" event, said Romney was solidifying the kind of relationships that could help him in any future race.

"Most people you meet, you tend to vote for and spread the word about," he said.

Another person there was Dane McBride, a doctor from Roanoke who was Romney's roommate when they served as Mormon missionaries in France. In trying to convert a largely secular and anti-American populace, he said, Romney learned something about persistence - a skill that has helped make him an unusually resilient politician.

"We had a lot of rejection in France," he said.