'Now it's time to restore the ties' 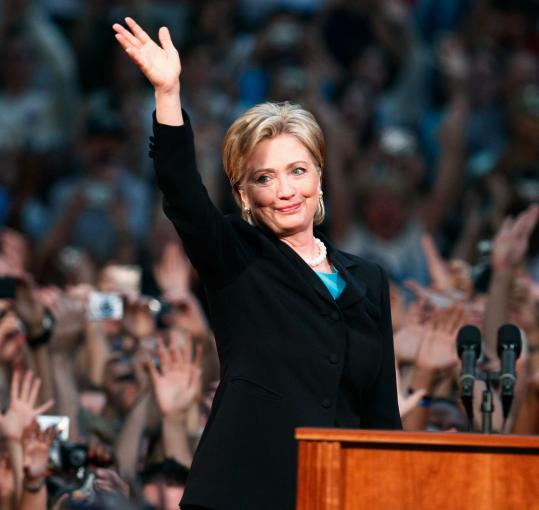 WASHINGTON - Without a hint of reservation in her voice or words, Hillary Clinton formally ended her presidential campaign yesterday and endorsed Barack Obama, a onetime rival she portrayed as a joint partner in a historic quest for the presidency.

"I think we all know that this has been a tough fight, but the Democratic Party is a family and now it's time to restore the ties that bind us together," the New York senator said at a midday rally at the National Building Museum. "We may have started on separate journeys, but today our paths merge."

Heralding Obama's candidacy as an opportunity to "stretch the boundaries of the possible," Clinton offered him her "full support" and vowed to "work my heart out" for his election. Her priorities were at stake, Clinton said, from universal healthcare coverage to control of the Supreme Court - suggesting that Obama would continue the "tremendous progress" made by her husband's administration.

"This is the yin and yang of the Democratic Party, and this speech created the perfect circle," said Mark Aronchick, a lawyer and fund-raiser who was chairman of Clinton's Pennsylvania campaign. "There will be nobody wondering, 'What does Hillary want?' "

Clinton, who had been officially running for president for 16 months, had declared "I'm in it to win it" upon declaring her candidacy last January. As late as Tuesday, after the final two primaries that gave Obama the necessary delegates for the nomination, Clinton insisted she would be "making no decisions" that night about whether to continue her candidacy.

Yesterday, she mounted a stage surrounded by her daughter, mother, and husband to wild applause from thousands of supporters. She waved, picked individual supporters out of the crowd, and took a little bow.

"Well, this isn't exactly the party I'd planned, but I sure like the company," Clinton said, framed by massive marbleized columns and encircled by supporters, some of whom leaned over the rafters beneath the museum's great hall.

The largely female crowd stretched down city blocks on a day when local broadcasters were advising citizens to remain indoors because of extreme heat. Sweat-soaked T-shirts outlined a campaign's life cycle in slogans, from "Rise Hillary Rise" to "Strength. Vision. Courage" to "Give 'Em Hill" to a freshly painted, homemade "Thank You."

Praising the putative Democratic nominee for "his strength and determination, his grace and his grit," Clinton called on her supporters to "join me in working as hard for Barack Obama as you have for me." Her invocation of his "Yes, we can!" catch phrase encountered a mix of applause, silence, scattered boos, and tears.

"I did see some Clinton supporters, female, that were crying their eyes out," said Charles Butler, 21, a onetime Clinton supporter from Guam who has signed on to work for Obama's campaign in New Mexico and hopes the two will end up on the same ticket.

"I think she has more work to do. But it will rely on Obama - it will depend on what he does."

In a statement from Chicago, where he took a day off from campaigning to play golf, Obama said: "Obviously, I am thrilled and honored to have Senator Clinton's support. But more than that, I honor her today for the valiant and historic campaign she has run."

Few candidates have ever acknowledged their defeats with as much fanfare, and few have found as much reason to claim victories. Clinton received, by varying counts, nearly 18 million votes - more than any other candidate to lose a party's nomination - and fought Obama to a near-draw through 54 primaries and caucuses.

"It's such a sad moment, it's a historic moment," said Maggie Bruck, 61, of Baltimore, a professor of psychiatry.

"We're all sad that she is not going to be the presidential candidate. She has been a wonderful spokesperson for the generation I grew up with."

While Clinton, the first woman to win a presidential primary, has consistently emphasized the momentous nature of her candidacy - invoking the pride of women born before they had the right to vote - yesterday she insisted bluntly that her gender had at times been a hindrance to the effort.

"Like millions of women, I know there are still barriers and biases out there, often unconscious, and I want to build an America that respects and embraces the potential of every last one of us," Clinton said. She declared that she would work for "equal opportunities, equal pay, and equal respect" for women and to ensure that "there are no acceptable prejudices in the 21st century."

Clinton encouraged supporters not to be dispirited by her loss, and said that her campaign would hasten the election of a woman to the White House. "Although we weren't able to shatter that highest, hardest glass ceiling this time, thanks to you, it's got about 18 million cracks in it," she said.

The choice of venue was conspicuous for Clinton, hampered by consistent charges from Obama that her campaign represented little more than a continuation of old-style Washington politics. She withdrew not in Arkansas or Illinois or New York, states she called home at various points - or Connecticut, Massachusetts, or Texas, where she claimed formative experiences - but in the capital, in a building that has long housed federal bureaucrats and was the site of two of her husband's inaugural celebrations.

Yesterday's event, delayed to the weekend so that more of Clinton's backers could attend, was designed in part to demonstrate the strength of the coalition that carried her throughout the long nominating contest.

"She's going to make it very clear to some broken hearts in this room our desire to make sure there's not a Bush third term," said Weiner. "Barack Obama is not a bad second choice."

Yet a fresh choice lies ahead. And for some it will be hard.

One woman with a battered "Hillary" sticker on her lapel said she wanted to learn more about John McCain and was unsure about Obama. "One of the things that's obvious is we don't know a lot about him," said Lee Richmond, a 73-year-old Maryland Democrat. "Most of what I've heard him say are platitudes."