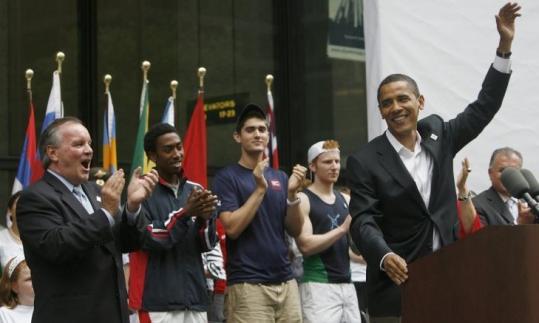 Republican John McCain's first major television ad after knowing for sure that Barack Obama will be his competition is a stark, personal pitch to voters that he knows about war - and knows how to keep America secure.

"Only a fool or a fraud talks tough or romantically about war," McCain says in the 30-second spot. "When I was 5 years old, my father left for war. My grandfather came home from war and died the next day."

"I was shot down over Vietnam and spent five years as a POW," he continues as historical images appear on the screen and sober music plays in the background. "Some of the friends I served with never came home. I hate war. And I know how terrible its costs are."

"I'm running for president to keep the country I love safe," McCain concludes.

Obama is counterpunching with his opposition to the very unpopular war in Iraq and his advocacy of better benefits for veterans.

Candidates address report of 49,000 jobs lost in May
The presumptive presidential nominees jabbed each other yesterday over a new report that shows the US economy lost 49,000 jobs in May - the biggest one-month decrease in two decades.

While they agree on the basic facts, their statements reveal more about their huge policy differences on the economy.

Democrat Barack Obama, in a statement, called the jobs report "deeply troubling," highlighted his proposals for a middle-class tax cut and a clean energy jobs plan, and warned that Republican John McCain would prolong failed policies.

Obama also announced a two-week tour, focused on economic issues, that starts Monday in North Carolina, a state he hopes to make a battleground in the fall. According to his campaign, "Obama will travel across the country, talking to Americans about how the economy affects their everyday lives."

McCain's statement called the jobs report "a stark reminder of the economic challenges facing American families," focused on his proposals for tax cuts and energy independence, and warned that Obama would return to failed policies.

Edwards dismisses talk of joining Democratic ticket
MADRID - John Edwards, whose high-profile endorsement of Barack Obama fueled talk of the two running together on the Democratic ticket, told two Spanish newspapers it is not going to happen.

"I already had the privilege of running for vice president in 2004, and I won't do it again," Edwards said in an interview published yesterday in El Mundo. El Pais, the country's other leading daily newspaper, carried similar comments.

Edwards praised Obama as a "visionary," the El Mundo said. "We don't live in a dream world and we have a lot of work to do," Edwards said in comments the newspaper translated into Spanish. "But Obama's potential is unlimited." The former US senator from North Carolina dropped out of the Democratic race in late January and was courted by both Obama and Hillary Clinton before appearing with Obama in Michigan last month.

Congressional Democrats to tailor bills for Obama
WASHINGTON - Between now and Election Day, Democrats say they will use Congress to showcase the kinds of change promised by their presidential candidate, Barack Obama.

Some legislation they will choose have good prospects of passage: policy blueprints for higher education and the military; a ban on lead in toys.

Other bills they will debate are doomed. But on those, the point is not passage this year. It is about making the case that the Democrats' plan for children's healthcare, for example, won't become law without one of their own in the White House.

Whatever legislation Democrats offer, it will have been vetted for the benefit of Obama's campaign, as is traditional between the congressional majority and its presidential candidate.

"Now that the primaries have come to a close, we relish the opportunity to compare agendas," said Senator Charles E. Schumer of New York.

Chicago on list of potential 2016 Olympics host cities
Barack Obama was supposed to take a three-day weekend with his family, but the devoted sports fan, Chicago booster, and lover of big crowds could not resist making a cameo at a downtown rally yesterday celebrating the Windy City's inclusion in the list of potential host cities for the 2016 Summer Olympics.

"In 2016, I'll be wrapping up my second term as president," Obama said, evidently feeling confident after wrapping up the Democratic nomination this week. "So I can't think of a better way than to be marching into Washington Park . . . as president of the United States and announcing to the world, 'Let the games begin.' "