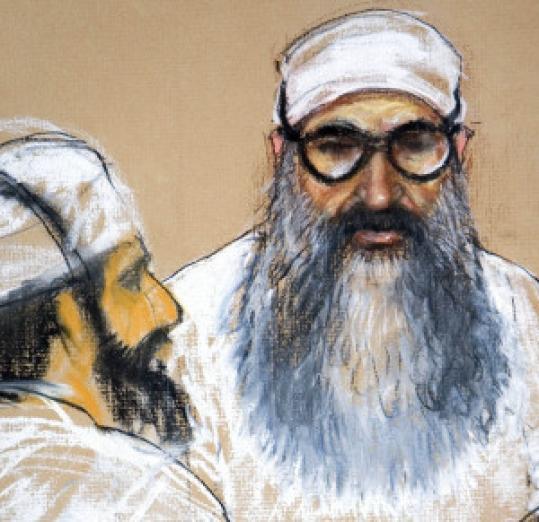 GUANTANAMO BAY, Cuba - Khalid Sheik Mohammed, the self-proclaimed mastermind of the Sept. 11, 2001, terrorist attacks, calmly told a US military court yesterday that he wishes for a death sentence so that he can become "a martyr."

Sitting at the front of a line of white-clad detainees who allegedly carried out the most devastating terrorist attack in US history, Mohammed stroked his beard spoke in English of his contempt for the US Constitution and the military commissions designed to try him.

Calling the process an inquisition, Mohammed told Marine Colonel Ralph Kohlmann, the presiding judge, that he wants to represent himself at trial and looks forward to the death penalty.

"Yes, this is what I wish," Mohammed said. "I have [been] looking to be a martyr from long time. I will, God willing, have this, by you. I understand very well."

Mohammed and four other alleged top Al Qaeda operatives emerged yesterday morning from their lengthy detention, appearing publicly for the first time since they were captured to face arraignment in one of the most anticipated trials in US history.

The men are accused of being at the heart of the conspiracy that shook America on Sept. 11, 2001 - unprecedented attacks that fixed Al Qaeda as the nation's chief worldwide enemy. They are charged with orchestrating the deaths of thousands of Americans on airplanes, in New York skyscrapers, and at the Pentagon.

A spokeswoman for the trials said the five defendants entered the courtroom willingly. In other cases, some defendants have resisted and have been forcibly removed from their cells to attend the hearings.

Mohammed quickly took center stage, railing against President Bush and his "crusades" in Iraq and Afghanistan while orchestrating a strategy that could prove a major disruption to the military commission trials.

After conferring at length with his alleged coconspirators, who were seated along a row of defense tables on the left side of the courtroom, Mohammed disavowed the system created to try him. He refused representation from any American citizen, saying he has a religious objection to anything outside Islamic religious law.

Walid bin Attash, 30, a Yemeni who is accused as part of the conspiracy, quickly followed suit, answering questions from the judge and closely conferring with Mohammed.

All five defendants appeared animated and engaged, at times answering questions in English, although some requested interpreters. Ramzi Binalshibh smiled and several times conveyed messages from Mohammed to the back rows, where Ali Abdul Aziz Ali and Mustafa Ahmed Adam al Hawsawi sat.

The cases against these detainees are largely for the purposes of the United States government obtaining death sentences, because even acquittal would most likely mean that the detainees remain in US custody indefinitely. The government has determined each of the men to be "enemy combatants" and serious threats to the United States and its allies.

Yesterday's arraignment is the first step in what is certain to be a lengthy and contentious legal process, one that will probably put the untested military commissions system itself on trial. Air Force Brigadier General Thomas Hartmann, the chief legal adviser for the military commissions, argued Wednesday that the trials will be "fair, just, and transparent," but defense lawyers have said that the system is a sham and that justice cannot be pursued in the courtrooms of this island military base.

Though other military commissions cases have reached the stage of arraignment and legal motions, only one other has been fully adjudicated. That occurred last year when Australian David Hicks reached a politically brokered plea agreement and was shortly repatriated and later released.

The arraignment marks the beginning of what could be the most important and most watched terrorism prosecution for the US government. The charges carry potential death penalties for all five defendants.

The defendants are expected to have the charges explained to them and to be advised of their rights to counsel. Each has a team of military and civilian lawyers available to them, and they could enter pleas to the charges. Several other detainees have chosen previously to boycott these and similar military commission proceedings.

Military officials escorted nearly 60 members of the domestic and international media to Guantanamo for the hearing, and as many as 29 will be allowed into the observation room at a time.

Victims and their relatives will be notably absent from the proceedings yesterday; they were not given the option to view or attend .

"That was a mistake," Hartmann said. "We'll make sure that doesn't happen again."