Will call for unity at Saturday event; Questions swirl about her future 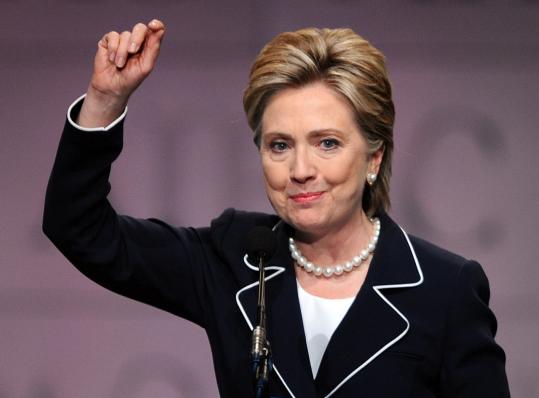 While she seemed at times to be touting her own staunch backing for Israel, Senator Hillary Clinton told the American Israel Public Affairs Committee yesterday, "Let me be clear: Senator Obama will be a good friend to Israel." (TIM SLOAN/AFP/Getty Images)
Email|Print|Single Page| Text size – + By Scott Helman Globe Staff / June 5, 2008

Senator Hillary Clinton plans to formally endorse Barack Obama on Saturday at a Washington event with her supporters, her campaign said last night, and will call on Democrats to unite behind their presumptive presidential nominee.

But her initial reluctance to back Obama and the continuing mystery over how exactly she will end her historic campaign had party faithful asking yesterday: What is she waiting for, and what does she want?

In the past 36 hours, Clinton has thanked her campaign staff for their work and discussed potential exit strategies with top advisers and supporters, who say she is resigned to not being the nominee. She has praised Obama for running a strong race. And she has vouched for his support for Israel before a leading pro-Israel lobbying group.

But the New York senator has yet to publicly acknowledge that Obama beat her for the nomination, leaving some of his support ers - and even some of hers - perplexed and disappointed.

Clinton could have been "far more generous" to Obama by conceding victory in her speech Tuesday night, US Representative Charles Rangel of New York, one of Clinton's strongest backers, said on MSNBC.

Other Clinton supporters said she recognized that the race was over, but simply needed breathing room before making a definitive statement.

"Senator Clinton will be hosting an event in Washington, D.C., to thank her supporters and express her support for Senator Obama and party unity," her campaign said in a statement last night. "This event will be held on Saturday to accommodate more of Senator Clinton's supporters who want to attend."

"She's absolutely committed to making sure the Democrats win in November," said US Representative James McGovern of Worcester, a member of Clinton's inner circle. "She will do nothing that undermines that."

McGovern cited the intensity of Clinton's support, particularly among women, and said that she had to think through the most effective way of getting her loyalists behind Obama in the fall. "Going out [Tuesday] night and simply saying it was over would not have resulted in the unity that we all wanted," McGovern said.

Despite the uncertainty earlier yesterday, Obama's camp moved ahead with its general election campaign against presumptive GOP nominee John McCain, making plans to tour Virginia, North Carolina, and other battleground states, expressing a willingness to hold joint campaign events with the Arizona senator, and announcing a committee to consider possible vice presidential candidates. The team will be led by Caroline Kennedy, the daughter of President John F. Kennedy; former Clinton administration official Eric Holder; and Jim Johnson, a former CEO of who has reviewed potential running mates for past Democratic nominees.

To many Clinton supporters, Obama's best choice is obvious: Clinton. With at least tacit approval from the New York senator, some of her most ardent backers have been ratcheting up pressure on Obama's team to put her on the ticket.

Longtime Clinton adviser Lanny Davis announced plans for a website and petition drive to press Obama to pick Clinton. Bob Johnson, the founder of Black Entertainment Television, wrote a letter to the Congressional Black Caucus asking the group to urge Obama to do the same. Clinton, Johnson said, knew of his efforts.

"I have been in touch with her all the way in my thinking about how we can move this country in a unified way, and she's prepared to be a part of that unity," he told CNN yesterday.

"We have the best chance of winning with Senator Obama at the top of the ticket, Senator Clinton as his vice president," Johnson added.

But some Obama supporters are adamantly opposed to the idea.

"We don't want her as vice president," Judith Shilling, a 68-year-old retiree from the University of Minnesota, offered without prompting as she waited Tuesday to get into Obama's victory rally in St. Paul.

President Jimmy Carter, who endorsed Obama on Tuesday, told The Guardian, a British newspaper, that selecting Clinton would be "the worst mistake that could be made," pointing to polls that indicate many voters hold unfavorable opinions of her.

Some analysts say the public appeals by Clinton's associates could box Obama in and intensify anger among her millions of supporters if he chooses someone else.

"The more they talk about it, the more reporting there is that she's actively interested in joining the ticket, the more it's a problem if and when he rejects her," said Stuart Rothenberg, who publishes the nonpartisan Rothenberg Political Report. "That would look like a real snub."

Rothenberg noted, however, that there have been instances in which political calculation, more than anything else, led to fierce primary rivals ending up side-by-side on a ticket. In 1960, Kennedy picked Lyndon B. Johnson, then a powerful leader in the Senate; in 1980, Ronald Reagan selected George H.W. Bush after Bush famously dismissed what he called Reagan's "voodoo economics."

Obama told reporters in Washington yesterday that he and Clinton had a brief discussion during their visit to the American Israel Public Affairs Committee conference, and that divisions within the party would heal. He dismissed a question about Clinton's lack of a concession, saying she was "understandably focused on her supporters."

"We're going to be having a conversation in [the] coming weeks," Obama said, according to the Associated Press. During a series of TV network interviews last evening, he repeated that Clinton would be on anyone's short list of vice presidential picks.

Obama's campaign maintains it is not concerned about an explicit concession from Clinton and feels no need to wait for one. Some supporters of his campaign said they are willing to give her time to respond.

"It's only been a day," said Massachusetts Governor Deval Patrick. "Give her a chance."

Both Clinton and Obama made a point of speaking kindly about each other in speeches yesterday to the American Israel Public Affairs Committee. Obama called Clinton an "extraordinary candidate, an extraordinary public servant," and "a true friend of Israel."

Clinton at times sounded very much as though she was still in the heat of a primary campaign, highlighting her staunch support for Israel's security. But she also voiced a strong defense of Obama.

Trying to put the rancorous primary behind them, Democratic leaders continued to line up behind Obama and tried to get the party to focus on the next five months. US Representative Rahm Emanuel of Illinois, a longtime Clinton insider and one of the most powerful members of the House, announced his support for Obama, and party elders urged other Democrats to do the same.

In a joint statement, Senator Harry Reid, the majority leader; House Speaker Nancy Pelosi; Joe Manchin, chairman of the Democratic Governors Association; and Democratic National Committee Chairman Howard Dean said that the remaining superdelegates who have not revealed their loyalties should do so by tomorrow.

"We have come to the end of an exciting primary and caucus process - the voters have spoken," the statement said. "Democrats must now turn our full attention to the general election."

Yesterday, his campaign challenged Obama to 10 town hall meetings around the country leading up to the parties' national conventions this summer. In a letter to Obama, McCain said that JFK and Republican Barry Goldwater had agreed to such a series of meetings for the 1964 campaign before Kennedy was assassinated.

Obama's campaign suggested it was open to the idea, but said it was too soon to commit.

So far, three officially sanctioned presidential debates are scheduled - Sept. 26 at the University of Mississippi, Oct. 7 at Belmont University in Nashville, and Oct. 15 at Hofstra University in Hempstead, N.Y.

Farah Stockman of the Globe staff contributed to this report; Scott Helman can be reached at shelman@globe.com.