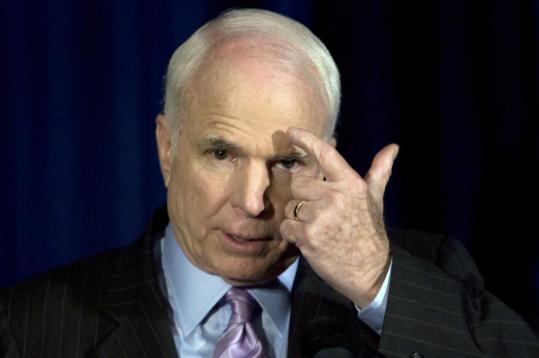 Republican candidate John McCain yesterday sought to shift the subject to what he said was the more important issue of whether the surge had been successful in reducing violence. (Morry gash/Associated Press)
Email|Print|Single Page| Text size – + By Scott Helman Globe Staff / May 31, 2008

With Iraq now back at the center of the presidential race, John McCain and his campaign struggled yesterday to explain a questionable claim the presumptive Republican nominee made about proof of military progress in the country.

Campaigning in Wisconsin on Thursday, McCain said that the so-called troop surge President Bush initiated last year was working, asserting as evidence that the United States had fewer troops in Iraq than it did before the surge began.

"We have drawn down to presurge levels," McCain said.

But according to Pentagon figures, McCain, who regularly argues that his superior knowledge and judgment about the Iraq war makes him more fit than Democratic front-runner Barack Obama to be president, is wrong.

The US currently has more than 150,000 troops in the country; prior to the surge, there were about 130,000. Even after planned withdrawals over the next two months, the Pentagon has said it expects to have 140,000 American troops there at the end of July.

"John McCain is out of step with history and facts," Senator John F. Kerry, Democrat of Massachusetts, a leading surrogate for Obama, told reporters yesterday, casting McCain's remark as the latest in a series of misstatements about Iraq that the Arizona senator has made.

Kerry also raised McCain's trip to a Baghdad market last year, during which McCain cited security gains in the city despite being protected by a heavy US troop presence and wearing body armor, and McCain's mistake two months ago in saying that Iran, a largely Shi'ite country, was training Al Qaeda, the Sunni terrorist network. It is impossible to argue that you are an expert on Iraq, Kerry said, "if you don't know the number of troops, if you don't know who's training whom, if you don't know what's safe."

McCain and his campaign offered a series of responses and explanations yesterday.

McCain's aides initially issued a blistering statement responding to the criticism from Kerry and the Obama campaign, saying, "What informed people understand, John McCain included, is that American troops are not even close to surge levels."

Then McCain's senior policy adviser, Randy Scheunemann, and McCain's fellow GOP senator from Arizona, Jon Kyl, told reporters on a conference call that the dispute was purely about "semantics" and "verb tenses," and that even if McCain's assertion about troop levels was not accurate to the letter, it made little difference, because the number of American troops in Iraq would, thanks to the success of the surge, soon be below the presurge level.

"The difference is so minuscule that I'm not sure it rises to the level of nitpicking," said Scheunemann, likening McCain's comment to Obama's recent misstatement about having visited "57 states" during the primary campaign.

Kyl said, "Take the worst possibility here, which is that Senator McCain misspoke, and that because of the specific words used, what he said was not entirely accurate. So what? What does that amount to?"

He added, "The real question is what does everyone know about John McCain's knowledge about the facts on the ground, and who has been more correct about what it takes to win?"

But at a news conference later in the afternoon, McCain stood by his initial comments. Asked if he misspoke, McCain said, "Of course not," asserting that some troops involved in the surge had already come home and the rest would be home by July.

McCain sought to shift the subject to what he said was the more important issue of whether the surge had been successful in reducing violence. "I know enough about the military and I know enough about history," McCain said. "This is about judgment and leadership and clearly Senator Obama was wrong."

Obama told a rally in Montana yesterday that McCain was wrong about the troop levels and that "anyone running for commander in chief should know better."

"I don't think tens of thousands of American troops amounts to nitpicking," he said in prepared remarks. "Tell that to the young men and women who are serving bravely and brilliantly under our flag. Tell that to the families who have seen their loved ones fight tour after tour after tour of duty in a war that should've never been authorized and never been waged. It's time for a debate that's based on the truth, and I can't think of anything more important than how many Americans are in harm's way."

Obama, like many leading Democrats, opposed the troop surge and has promised to bring combat troops home from Iraq starting from his first days in office.

McCain came under additional criticism yesterday for saying Thursday that Basra, Mosul, and Sadr City, a Shi'ite enclave of Baghdad, were "quiet" - the same day three suicide bombings struck Mosul, a northern Iraqi city. McCain did acknowledge, however, that "it's long, and it's hard, and it's tough, and there will be setbacks."

And after criticism from Obama supporters, he also conceded it was inappropriate to use in a fund-raising solicitation a photo of him and General David Petraeus, who commands American forces in Iraq and was an architect of the surge.