Obama reaches out to deliver assurance to Jewish voters 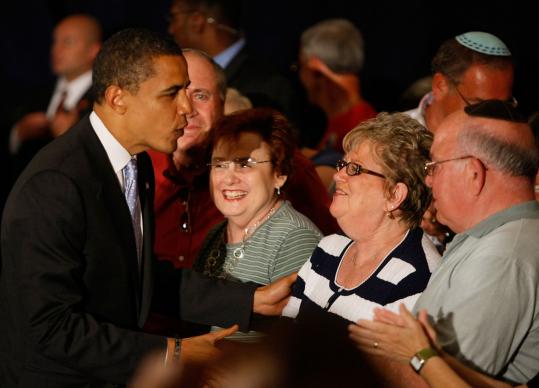 Barack Obama greeted supporters during a Town Hall meeting at B'nai Torah Congregation in Boca Raton, Fla. He said "one of the most painful things" about the campaign has been the hints of a rift between the political interests of Jews and blacks. (Joe Raedle/Getty Images)
Email|Print|Single Page| Text size – + By Sasha Issenberg Globe Staff / May 23, 2008

BOCA RATON, Fla. - The man in the yarmulke who identified himself as "from Brooklyn to Boca" took several minutes to itemize some of Barack Obama's most controversial associations - the Michigan imam he met on a campaign trip, the Arab-studies professor with whom he has been friendly - before it became clear that he had less of a question than a demand. He wanted a list of the candidate's Jewish, pro-Israel acquaintances.

"Are there people who will vouch for me?" Obama said, trying to rephrase the most combative inquiry he encountered during a town hall meeting at B'nai Torah, a conservative synagogue in Boca Raton. "I have to be very cautious about this, because remember the old stereotype: Someone says, 'I'm not prejudiced because some of my best friends are Jewish.' "

Obama nonetheless started listing names, from a top fund-raiser to a longtime Illinois political mentor, but it quickly became evident that he had come to vouch for himself. Beneath a giant chandelier in a ballroom typically used for bar and bat mitzvah receptions, Obama attested to his "unshakeable commitment" to Israel's security and took issue with President Jimmy Carter's personal diplomacy, declaring "we should only sit down with Hamas if they renounce terror."

Above all, Obama offered a display of his personal familiarity with Jewish culture - recalling a summer-camp counselor who taught him about Zionism, and the role Jewish authors have played in his intellectual formation - as he declared "we will always have a special relationship," appearing for a moment to speak interchangeably about Israel and the American Jewish community.

Obama said "one of the most painful things" about the campaign has been the hints of a rift between the political interests of Jews and blacks, and he promised to be "one of the vehicles by which we can rebuild those bonds." He later compared reports of racist sentiment against him on the part of Jews to the anti-Semitism he has fought in the black community. "That sense of a common kinship of a people who have been uprooted, a people who have been on the outside - that strikes me as the very essence of what we should be fighting for," Obama said.

While Obama has met in small gatherings with Jewish leaders in Cleveland and Philadelphia, this was the first time he did so in a large-scale public forum. South Florida's Jewish population is among the nation's largest and most visible, and one with which he has rarely communicated directly, thanks to his decision to respect the Democratic National Committee's boycott of the state's January primary.

"The who's-who of Boca is here," marveled Nancy Gilbert, an Israel-tour operator whose husband, Mark, is a major Obama fund-raiser. "People in the Jewish community want to be assured that he is not a strong supporter of the state of Israel, but an unequivocal supporter of the state of Israel. Senator Obama's been saying that all along but he hasn't had the chance to have a public forum here."

Tickets to the event were distributed by local rabbis and Jewish groups. An organizer said the crowd of 1,400 included supporters of Hillary Clinton, John McCain, and Obama - the last group recognizable by buttons on their lapels featuring Obama's name spelled with Hebrew characters.

"I come from a dialectical tradition," said David Steinhardt, the congregation's rabbi. "I appreciate an open conversation, the ability to talk to people and disagree with them. There's a lot of rumor and innuendo that can be dispelled with an open conversation."

At one point, Obama responded point by point to fliers he said had been distributed outside the event, with talking points raised by the Republican Jewish Coalition, a national group that greeted Obama's visit with ads in local papers questioning his commitment to Israel.

"It's no surprise that he came to a shul in Florida to work the Jewish community - it's very clear they've got to try to do damage control," said Matt Brooks, the coalition's executive director, using the Yiddish word for synagogue.

Obama has suffered on multiple fronts with Jewish voters, who polls have suggested support him at lower levels than past Democratic nominees. His insistence on greater diplomacy with nations like Iran and Syria have led critics, including McCain and Clinton, to question his foreign-policy acumen, particularly in the Middle East.

At the same time, rumors have persisted about Obama - most prominently, that he is a Muslim and that he is allied with critics of Israel - on the Internet and by word-of-mouth here among retirement-community residents and synagogue-goers.

"The Jewish community here is made up largely of older people - not to suggest they're gullible, but maybe they don't delve into the fine points," said Michael Gora, a lawyer active in county politics who said he had been neutral in the primaries but will support Obama as the nominee.