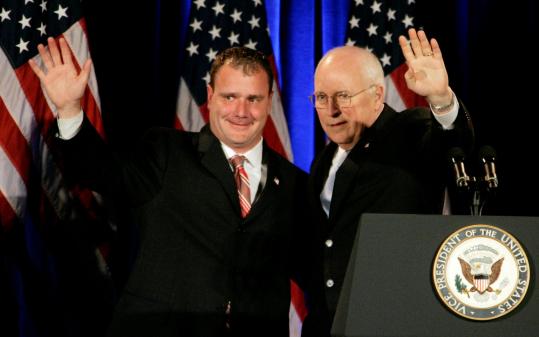 In national elections, Republican candidates count on a big money advantage over Democrats. Not this year. Fund-raising by Republicans is down sharply from past election cycles.

But the Republican National Committee is quietly banking millions more than its Democratic counterpart, hoping to amass $120 million to fund an RNC campaign on behalf of John McCain and help offset Barack Obama's vaunted money-spinning machine. Democrats expect the rival party to run a more aggressive anti-Obama ad campaign than the McCain campaign would, but Robert M. "Mike" Duncan, the chairman of the RNC, told the Globe last week that the party intends to abide by McCain's desire for "a respectful campaign."

The RNC is the GOP's only bright spot these days in the money race, holding a $26 million cash-on-hand advantage over the Democratic National Committee in most recent reports. The party's House and Senate campaign arms are being trounced by their Democratic counterparts, and McCain, the party's presumptive presidential nominee, has struggled, raising less than one-third as much money as Obama, his likely Democratic opponent in November.

By most indicators, the Republican Party is in trouble, saddled with an unpopular president leading an unpopular war and a government chalking up huge budget deficits during an economic slowdown. The outlook darkened greatly after the GOP's stunning loss of another special congressional election last week, the third time in two months that a "safe" Republican seat flipped to the Democrats.

Waiting in the wings, meanwhile, are outside advocacy groups, many with Democratic sympathies, that will spend a combined hundreds of millions of dollars before the campaign is over.

In the face of these challenges, the RNC is stockpiling funds to help McCain and has been jointly raising funds with the Arizona senator for the past month. A recent event in New York City took in $7 million. An updated finance report to be filed this week will reflect April as "the best month we've had," Duncan said in the interview. In the first four months of the year, the party collected contributions from "around 700,000 donors," he said.

The RNC, which, on average, raised $108 million more than the Democratic National Committee in the four previous election cycles, is unlikely to achieve that dominance this year, but it hopes to build on its current advantage over the DNC.

Mindful of the fund-raising gap, Howard Dean, the chairman of the DNC, decided not to wait until the Democratic race is settled and announced Wednesday that the party had reached a joint fund-raising agreement with Obama and Hillary Clinton. The agreement, similar to one used by McCain and the RNC, will allow major donors to write a single check for up to $33,100 - with $28,500 going to the party, and $2,300 each to the candidates' primary and general election funds.

"Once the DNC and the nominee are seen as one in the same, our fund-raising will take off," said Stacie Paxton, a spokeswoman for the DNC, predicting Democrats will erase the GOP's lead.

Still unresolved is the issue of public funding in the general election, the period after both candidates are formally nominated at their parties' conventions. Even if a candidate agrees to take $84.1 million in federal funds and limit spending to that amount, there would still be plenty of money available through the parties and outside advocacy groups.

By law, each party may spend no more than $19 million in coordinated expenditures with the candidates' campaigns. But the parties may also expend unlimited funds on "independent expenditures" and so-called hybrid advertising that mentions the candidate with generic references to the party.

Frequently, independent party expenditures are used to run negative advertising that frees the candidates they are helping from responsibility. But Duncan, the RNC chairman, said, "Senator McCain and I talked about running a respectful campaign, and we've certainly done that and are following his lead. . . . The American people deserve to have this election framed in terms of the big issues of the day."

Asked whether the RNC will respond in kind if the Democrats run negative ads, he said, "It's not my intent to get into that. Hope springs eternal. We want to run a respectful campaign."

What worries Republicans most is the demonstrated ability of the Democrats to generate enormous sums, much of it via the Internet at virtually no expense. Through the most recent reporting period, Obama's campaign had raised almost $235 million and Clinton's $176 million, compared with McCain's $75 million.

At the congressional level, the Republicans' challenges are daunting.

The National Republican Congressional Committee, outspent by its Democratic counterpart, is all but tapped out after the string of recent defeats, all in conservative districts. Prospects are not much brighter in November when its rival, the Democratic Congressional Campaign Committee, hopes to target up to 75 House seats, including many of the 26 being vacated by Republicans at the end of this term.

In the recent special elections to fill congressional seats in Illinois, Louisiana, and Mississippi, the DCCC outspent the NRCC about $4 million to $3 million, and had a $37 million advantage in cash on hand through the most recent reporting period. That is a sharp reversal from the four previous election cycles, when the GOP congressional committee outraised the DCCC by an average of $70 million per cycle.

The dimensions of the Republicans' problem were clear in the loss of the special elections.

Representative Tom Cole of Oklahoma, the NRCC chairman, told reporters that the Republican Party suffers from "a deficiency in our message and a loss of confidence in the American people about what we're going to do." The Democrats who won in the Deep South states - Don Cazayoux in Louisiana and Travis Childers in Mississippi - ran as social and fiscal conservatives.

The losses in the special congressional contests have unnerved some Republicans because the seats had been held by the party for years and the lines of attack that hobbled Democrats in the past appeared to have little impact or might have backfired.

Stuart Rothenberg , editor of the nonpartisan Rothenberg Political Report, said the lagging Republican fund-raising is a function of the party's image problem but also the loss of majorities in both the Senate and House, and reservations about McCain in some quarters. "When you're no longer in control, it's harder to raise money," he said.

Cole's committee was outspent by Democrats and allied labor unions in two of the three special elections, but Republican candidates were helped by a new advocacy group, Freedom's Watch, which is expected to be a major player in the fall. In Louisiana and Mississippi the group spent a total of almost $1 million on negative "issue ads" aimed at the Democrats, in some spots linking them to Obama.

The group's principal funder is multibillionaire gaming tycoon Sheldon Adelson of Nevada, but because it is organized as a tax-exempt lobbying group under the Internal Revenue Code, the identity of its donors and the amounts they have given are not disclosed. Democrats are challenging that classification.

"We're an issues organization, we're not a political outfit, and we intend to impact public policy debates locally and nationally," said Ed Patru, the group's spokesman. He said Freedom's Watch now has a staff of "about three dozen" and will be involved in Senate and House campaigns but that no decision has been made about whether to try to influence the presidential campaign.

Of published reports that have said the group plans to spend $200 million or more this year, Patru said: "The sources for that information were not in a position to know, and, frankly, decisions on what we intend to spend have not yet been made."