Gay marriage back as a campaign issue 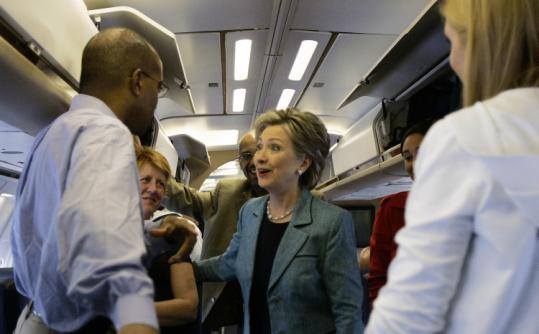 Republicans used same-sex marriage to great political effect in 2004, putting proposed bans on the ballot in Ohio and other states to get conservatives to the polls. But now it will have to compete for attention with the economy, the Iraq war, and other issues.

And impact of the gay marriage issue could be muted, not just because neither the Democratic front-runner, Barack Obama, nor the presumptive Republican nominee, John McCain, support gay marriage, but because McCain's opposition to a constitutional amendment banning same-sex marriage - on federalist grounds - makes it more difficult for the right to get a lot of traction out of it.

Obama's campaign said in a statement yesterday, "Barack Obama has always believed that same-sex couples should enjoy equal rights under the law, and he will continue to fight for civil unions as president. He respects the decision of the California Supreme Court, and continues to believe that states should make their own decisions when it comes to the issue of marriage."

McCain's campaign said he "supports the right of the people of California to recognize marriage as a unique institution sanctioning the union between a man and a woman, just as he did in his home state of Arizona. John McCain doesn't believe judges should be making these decisions."

The United Steelworkers, which had endorsed Edwards last September in the Democratic presidential race, shifted to Obama as well, bringing 1.2 million active members and retirees.

The union also joined the growing chorus of Democratic constituencies calling for Hillary Clinton to withdraw, or at least to not attack Obama.

"All of us, including, we hope, Senator Clinton, for whom we have the utmost respect, must now do everything we can to ensure that Barack Obama is the next president of the United States," its statement said.

Obama has also picked up the backing of at least five of the 19 delegates pledged to Edwards.

The Illinois senator also extended his lead among superdelegates as the party coalesces behind him. Representatives Howard Berman and Henry Waxman - both key committee chairmen from California and leaders in the Jewish community - added their effusive blessings, along with US Representative Jim McDermott of Washington and Larry Cohen, president of Communications Workers of America and a member of the Democratic National Committee.

Obama, with 1,896 total delegates, is now within 129 of clinching the nomination.

State abortion-rights group asserts neutrality in race
The National Abortion Right Action League's endorsement of Barack Obama is getting quite a bit of blowback from within the organization itself.

Several state affiliates have made clear that they are staying neutral in the Democratic race and that they had no say in the decision by the national group's Pro-Choice America political action committee.

NARAL in Massachusetts, which has 20,000 members, posted a statement to that effect on its website yesterday.

"It certainly generated a strong response from supporters of both Democratic presidential candidates," Andrea Miller, executive director of NARAL's Bay State affiliate, said in a telephone interview. "We did hear from some members in the state. We made clear to them the endorsement was made by the national PAC and we had no input in the decision."

The national PAC said Wednesday that it was acknowledging that Obama is the likely nominee - and not slighting Hillary Clinton, whom it had supported throughout her political career, support she returned in kind.

Clinton attacks McCain for opposing farm bill
BATH, S.D. - Hillary Clinton scolded John McCain yesterday for his opposition to the farm bill, attempting to maintain the sense that she is already competing against him even as her chances for winning the nomination dim.

As she chatted up rural South Dakotans, who vote June 3, Clinton noted that President Bush has said he will veto the bill, which Congress passed yesterday, and McCain has said he would too if he were president. "They're like two sides of the same coin, and it doesn't amount to much change, does it?" she said.

Bush and McCain both say the bill, which would boost farm subsidies and include more money for food stamps, is fiscally irresponsible.