Views differ on disposition of detainees 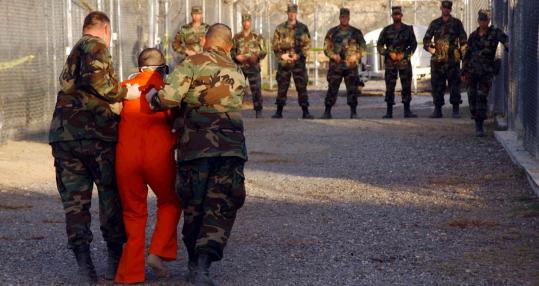 Police escorted a detainee to his cell at Guantanamo Bay in Cuba in this file photograph taken Jan. 11, 2002. Republican John McCain and Democrats Hillary Clinton and Barack Obama have said the facility should be closed. (Shane T. McCoy/Department of Defense via Reuters)
Email|Print|Single Page| Text size – + By Farah Stockman Globe Staff / May 11, 2008

WASHINGTON - In 2003, Senator John McCain irked his fellow Republicans by urging the Bush administration to either put Guantanamo Bay detainees "on trial for their crimes or to release them." But in recent years, he softened his stance as he courted the Republican mainstream.

In 2005, Barack Obama invited Guantanamo Bay defense lawyers to work out of his office in Capitol Hill as they lobbied to preserve the legal rights of detainees. He still rails against Guantanamo in his stump speech.

Hillary Clinton has been far more cautious than her two rivals, saying little in public about Guantanamo Bay during the early years of the offshore prison.

In a presidential race where all three candidates, including presumed GOP nominee Senator John McCain, have pledged to close Guantanamo Bay, bringing President Bush's signature policy in the war on terrorism to an end, the candidates' views on the detainees still differ significantly in ways that cut to the heart of who they are.

Their views apparently have not changed even though a suicide bomber who also killed several Iraqi soldiers last month had been detained in Guantanamo for more than three years before being returned to Kuwait, his home country, in 2005.

Representatives of the Obama and Clinton campaigns did not return several requests for comment. A spokesman for McCain said the suicide bombing has not changed the Arizona senator's position that Guantanamo should be closed.

Jeff Sadosky, a McCain campaign spokesman, said Thursday that the Arizona senator continues to believe that inmates who are still considered threats to the United States should be dealt with judiciously, including trial and imprisonment in their home countries once the detention center is closed. "This is not about letting those who wish to do us harm go free," he said.

McCain, who was a prisoner of war for five years in Vietnam, was among the first members of Congress to question Bush's policy of detaining suspected Al Qaeda and Taliban without trial. In 2003, McCain visited Guantanamo Bay and criticized the delay in adjudicating their cases.

"I am convinced that they are terrorists," McCain told CNN. "But I do believe that every human being deserves a right to have their case decided, either to put them on trial for their crimes or to release them."

Two years later, McCain challenged the White House by sponsoring a bill banning the torture of detainees in military custody, a move that made him a target of conservative attacks. But in a compromise with fellow Republicans, McCain allowed the bill to include a provision that removed the detainees' right to contest their imprisonment in federal court.

In 2006, he supported the Military Commissions Act, which provided military trials for some of the detainees, but allows evidence obtained through torture. In February, McCain sided with Bush by opposing restrictions on the CIA's use of tactics widely considered to be torture, prompting some human rights activists to accuse McCain of betraying his own cause to woo conservatives in the presidential race.

Like Obama and Clinton, McCain has called for closing Guantanamo Bay, and bringing detainees to prisons inside the United States, where their treatment and adjudication can be more closely monitored. But unlike his opponents, McCain would continue the military commissions that have already been set for the roughly 80 detainees against whom the military says it holds enough evidence to prosecute.

For the rest, McCain leaves open the possibility that they could be held indefinitely on US soil, subject to "other means of adjudication," such as military status reviews of their case, according to Randy Scheunemann, director of foreign policy and national security for the campaign.

McCain does not believe the detainees are entitled to the "full constitutional protections that are afforded to US citizens," he said.

That leaves some to worry that McCain would set up a system on US soil as legally problematic as Guantanamo Bay itself.

When detainees first began arriving at Guantanamo Bay in 2002, Obama was teaching constitutional law at the University of Chicago, where he told students that America's freedoms are rooted in habeas corpus - the right to challenge one's detention in court.

"Habeas is essential to the American legal system," said Geoffrey Stone, a law professor at the University of Chicago who taught during Obama's time there. "I'm quite confident that Senator Obama, as a constitutional lawyer, understands the essential importance of habeas corpus in a way that the current administration does not."

In 2005, after Obama was elected to the Senate, he saw first-hand how unpopular a cause Guantanamo Bay can be when fellow Illinois Senator Dick Durbin was widely attacked and forced to apologize for comparing the US-operated military prison in Cuba to a Soviet gulag.

But when Guantanamo Bay defense lawyers came to Obama's office in 2006 asking him to help them stop a bill that would take away detainees' habeas corpus rights, Obama agreed without hesitation.

"He said, 'I don't know which way this shakes out politically, but this is wrong, and you can count on me,' " said Thomas Wilner, one of 80 Guantanamo Bay defense lawyers who has since signed a public letter supporting Obama's candidacy. "A lot of people were afraid that they would look weak on terrorism. He really understood that our greatest strength is our values."

Obama now says that, as president, he would stop the military commissions and try the remaining Guantanamo Bay detainees in military courts-martial or in federal courts, which have successfully tried some terrorist cases.

That has led critics to charge that Obama's plan would lead to the release of dangerous people, since the US military could not gather the same caliber of evidence against the detainees as would be required in a US court.

Obama's aides acknowledge that he has not made the difficult decision of what to do with the 200 or so detainees against whom there is little evidence. But they say he has faith in the US legal system and believes that detainees should be brought to the United States where they would have the same rights as American citizens - a plan that would almost certainly bring about the release of some of them.

Hillary Clinton was a freshman senator with only a year in office when Bush began to bring detainees to Guantanamo Bay in January 2002. She and many fellow Democrats in Congress said so little in opposition to the prison during those early years that right-leaning commentator William Safire accused them of giving Bush a blank check in his treatment of detainees. "Not a peep out of Hillary Clinton," he wrote.

Clinton became far more outspoken on the issue over the years, but was careful to couch her arguments in language that would reassure a nation worried about its security. In July 2006, she appeared to express support for the notion that the president has a right to hold detainees until the war on terrorism is over - even if they were acquitted of a specific crime in a trial.

"You do not have to let people go," she told a Senate hearing. "These are enemy combatants, prisoners of war, whatever we want to call them. I mean, we had Nazis in prison camps in our country for years. And then the hostilities ended and they were let go."

Lee Feinstein, national security director for the Clinton campaign, said that she was simply explaining the law, not expressing her opinion. But her statements earned praise from her Republican counterparts.

Later that year, Clinton agreed to back legislative attempts to preserve detainees' habeas corpus rights. But her strong statement of support came only after a series of long and difficult meetings, according to some of the participants.

Like Obama, Clinton opposed the Military Commissions Act, but she offered no legislation on the issue. She called for closing Guantanamo Bay in April 2007, noting that the facility had stained the US reputation and that Defense Secretary Robert Gates had already indicated that he wanted to close it.

"Senator Clinton believes those who have committed crimes against the United States should be brought to justice, and that justice is long overdue," Feinstein said.

Now, Clinton says, if she becomes president, she would ask the Justice Department to evaluate the cases of the detainees and decide whether they should be tried in federal courts or courts-martial.

Joseph Williams of the Globe staff contributed to this report.